Zakharova: Pompeo and Lavrov Meet For Talks But Any Dialogue With Washington is Sabotaged! 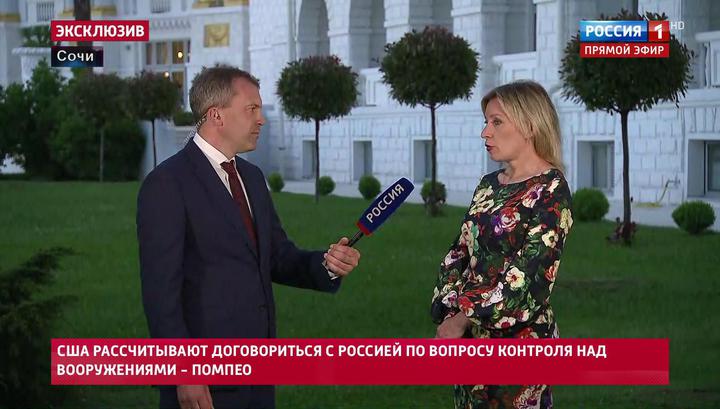 This is a special edition of 60 Minutes. Sochi-Moscow.

We now have a special guest — Maria Zakharova, the Director of the Information and Press Department of the MFA. You've seen and assessed everything. But I'd like to make a small remark first. Ukrainians and we live in different realities and worlds, even judging by today's slips of the tongue. Excuse me, but Brussels called Poroshenko Pedro today, didn't it? It was one of the European Commissioners.

Maria Zakharova, Director of the Information and Press Department of the MFA: It's an ordinary slip of the tongue. Maybe, they know something that we don't.

- The realities were completely different today. Pompeo began his part of the briefing greeting journalists. He made a statement, saying, "I'm grateful to President Putin and Prime Minister Lavrov." That's how it went.

- It was a very unnerving moment because I thought about whether it was interference with Russia's internal affairs from US officials or not. But then Pompeo returned Sergey Viktorovich to the MFA. Then, during the rest of the press conference, he called him a foreign minister, as it should be.

Actually, I'd like to thank you for adding a positive note like this. But I think the negotiations were very constructive. They discussed different issues, including those on which we have different positions, to put it mildly. They were discussed in a very constructive manner. I think that the parties listened to and heard each other. It's very important to note. I think that the joint press conference also showed that there's a desire and a willingness to really begin to restore bilateral relations. Well, Moscow has been talking about it for a long time. But I think that today, the US delegation also talked about it in a very positive and constructive way.

- Does this give us any hope or not? After all, we know how Pompeo came here. He said that the sanctions with respect to Nord Stream were necessary, the Ukrainian sailors should be returned, etc. Trump said that he was the toughest president that ever interacted with Russia. And in Sochi, Pompeo didn't call us an aggressor or anything like that. Maybe, it's just diplomacy?

- Of course, we shouldn't forget about that. It's diplomacy, and among other things, it's big politics. But we understand well why such a weird approach from Washington appeared. It was caused by internal political struggles. They weren't problems, they were real battles. It was also caused by the hysteria in the mainstream media. By the way, it hasn't gone down much. But the news reports made by journalists in the US, by a certain order and with a certain frequency and regularity, isn't having any impact at all. These are news reports that only appeal to those who can't accept the defeat of 2016 or those who feel that life is unfair. But I think that today's press conference showed that, and you probably heard the question from one of the US journalists, despite the fact that many things haven't been proven, these misconceptions have deep roots in the minds of the US public, unfortunately. The question about Russia's interference with the US elections is already presented not as a question but an established fact. And it's important to keep this in mind when trying to understand the position of the US delegation. But I'd like to reiterate that as to the duration and the format, the negotiations were full-fledged. It means that the parties discussed everything in detail. It's a step in the right direction.

And, of course, we all are looking forward to the continuation of this day, in a political sense of the word. The Russian president is to receive the state secretary.

- Our cameramen captured an interesting scene. Pompeo said something, you smiled, even laughed. We'd like to know what he said. We'd also like to know what the atmosphere was like because we weren't really friends with Kerry and Obama, but Lavrov came to meet Kerry in a Pobeda sedan and they talked in a different way. And what about Pompeo?

- It was great. You know, thank you very much for asking me this question and noting that, because, well, it's a paradox. The Democrats, the previous administration, and I'm not talking about all of the Democrats but at least the people who represented the Democratic Party and ran the White House, deliberately worsened bilateral relations. They simply destroyed them. At the same time, the frequency and duration of meetings, you all probably remember, Lavrov and Kerry would talk for hours. The state secretary would even call several times a week, sometimes several times a day. Now, any contact from Trump's administration, the administration representing another US party, is perceived negatively by the Democrats. It's a paradox. I reiterate that on the one hand, the trenchant anti-Russian policy was a discovery of the State Department, which was run by the White House under Obama. But the dialogue, the negotiations, and the desire to engage Moscow in the global negotiation process didn't wane for some reason back then. Now, any telephone conversation between Trump and the Russian president, any negotiations between the State Department and the Foreign Ministry, any meeting between delegations are immediately criticized by the representatives of the previous administration. It's a paradox and, in my opinion, it's hypocrisy on a colossal level. I'm telling you again that, unfortunately, with such extensive support for this from the media, and it isn't even support but something done in service to some political interests, it's impossible to hear the voice of reason.

- It isn't you who should speak for the US, but nevertheless, you're an experienced diplomat. The US president says that there'll be no dialogue until Russia releases the Ukrainian sailors. He made such an outrageous step and canceled the meeting with Putin in flight. And then, Lavrov and Pompeo met in Helsinki, Trump's assistant came to meet with Ushakov. Now, there were the three-hour negotiations with Lavrov. What does it mean?

- If I'm not mistaken, you heard that at every level, Russia stated that the whole story with the Ukrainian sailors was President Poroshenko's attempt to fix his ratings on the eve of the elections by any means necessary. Everyone who is involved in the situation in Ukraine witnessed those attempts. We all saw how bloodthirsty those attempts were. We saw that Poroshenko was ready to go to great lengths to save face and avoid total defeat somehow. Actually, I can't say for sure because I'm not a political strategist of Poroshenko's team. God forbid. We all knew perfectly well that…

- He wouldn't have lost then.

- He'd have lost in any case, which is what happened. We all knew perfectly well that it was part of the campaign and basically, the only thing the campaign was based on. It was the story with which he went to Europe and the US. It was that story that helped him to assert himself somehow and declare himself a zealous person and a fantastic patriot but, unfortunately, he couldn't count on anything bigger. That's why I think that the international support which he got was expected to be to the benefit of that election campaign. That's why we shouldn't look for contradictions here. It's all consistent with that policy. Poroshenko was a puppet, and nobody concealed that. Those who put him in power tried to help him. We saw that the representatives of the administration met with Poroshenko. We saw and heard the words of support. There was also a campaign connected with the sailors whom they were ready to sacrifice, turn them into real lambs of God only to please Poroshenko. Actually, it was partly carried out by the Ukrainians. But it didn't lead to those consequences which Poroshenko, I'm sure of it, expected.

- And the last brief question: Will we press a new restart button soon?

- I hope that we'll never see the button which Clinton brought again.

- Thank you very much. That was Maria Zakharova, the Director of the Information and Press Department of the MFA. I know that she has to dash because the political night is still young.