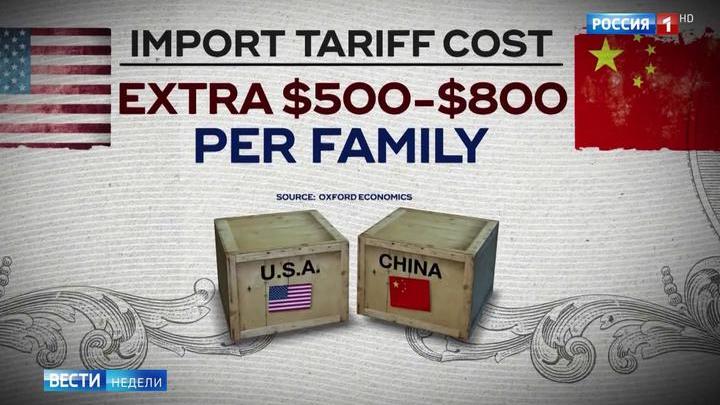 However, America also continues to put pressure on Venezuela.

The protege of the US, the impostor Juan Guaido, can't take power even in Washington. The Venezuelan Embassy remains under control of supporters of the elected President Nicolas Maduro, even despite the fact that there aren't any Venezuelan diplomats inside.

The confrontation now looks like this. Those who support Maduro are inside. Then, there are his opponents, opposition members. Then, there's the police cordon and supporters of Nicolas Maduro again. This confrontation is escalating. Those who barricaded themselves inside put a large bicycle lock on the doors of the embassy. They're constantly hanging new posters from the windows. There is an American boot crushing the planet and an oil derrick with blood spurting out of it with the words "NO WAR FOR OIL". Activists also put up a lot of posters. Signs with "THE COUP FAILED" are everywhere.

Those who support Guaido are in the minority. But the Washington police and the State Department's security service are on their side. Together, they stop supporters of Maduro from rushing to help their fellows from approaching the embassy. During the many days of confrontation, the police arrested 12 activists. Venezuela's self-styled ambassador to the US, Carlos Vecchio, didn't appear at the last rally. On Guaido's order, he negotiated with the US Southern Command. The opposition members openly ask the Americans to send troops.

"Our main mass media feed us with it every day, that the US has to interfere with Venezuela's affairs because there's a humanitarian crisis there. But in fact, America doesn't care about the Venezuelan people. First of all, America should lift its sanctions because they caused the crisis".

But Washington relies on force only. There are the most severe sanctions and warships at the same time. They sent a US Navy hospital ship to the shores of Venezuela. It can admit the injured in case of a military operation, for example. An entire carrier group, including submarines and dozens of bombers, is heading to the shores of Iran. The passage of the nuclear-powered aircraft carrier Abraham Lincoln through the Suez Canal and training flights were shot by the Pentagon's cameramen in detail and spread the video in the world's mass media to achieve the necessary psychological effect.

Donald Trump: "We have one of the most powerful ships in the world, and it's fully loaded. We wouldn't like to undertake anything. The Iranians better call me. They should call, and we can agree, make a fair deal".

The Swiss Embassy, which Iran uses to represent its interests in the USA, was given a special number by the White House which the Iranians can use to contact the Trump administration. But the phone is silent. For Iran, negotiations at the gunpoint of a carrier strike group are unacceptable. The dialogue between the US and North Korea has also stalled. They also failed to make an agreement with China. Trump declared a large-scale trade war, raising tariffs from 15 to 25% on a significant part of Chinese goods. But the delegation from Beijing didn't surrender and left Washington without even setting a date for a new meeting. Afterward, the US president sends threats to impose tariffs on all Chinese imports. Trump is in a hurry to strengthen his image of an expert in making deals because the elections are coming.

Donald Trump: “On my first night at the White House, I said to Melania, "Imagine, whole four years, it's so long". These four years seemed to be impossible. And now, look, less than a year and a half is left before the elections. Think about how time goes by very fast. Senator Marco Rubio does an excellent job. How are we doing in Cuba, Marco? How are we doing in Venezuela? Step by step".

However, Trump apparently doesn't like this pace. According to sources, he's extremely dissatisfied with the advice from NSA John Bolton with respect to Venezuela in particular. He's known to be a supporter of power actions, always offering to solve any problem with bombs. Obviously, pressure and intimidation alone led to nothing. US news channels talk about an alarming trend.

"Foreign policy. The tensions with China, North Korea, Iran, and Russia is escalating".

There was an attempt to hold a dialogue with Russia. After the telephone conversation between Presidents Putin and Trump, top diplomats Lavrov and Pompeo met in Finland. And here's a new meeting in Sochi. Iran and Venezuela among the main topics. The situation around the Bolivarian Republic's embassy in Washington is escalating. The city services have begun to open manholes. There was a rumor that they'd storm the embassy. Although even the White House understands that there are no legal grounds for the American authorities to break into the territory of a foreign diplomatic mission.

There is a lot of police around the Venezuelan Embassy, but they're not storming the building yet. The tactics are different. They're trying to smoke out supporters of Maduro who have barricaded themselves in the building. They've already cut off the electricity and water. Moreover, opposition members supporting Juan Guaido are blocking food supplies. Those who tried to throw at least some food, a head of lettuce or a cucumber, at the embassy's windows, were arrested.

- How many days do your people can last with the food they had there?

Medea Benjamin, co-founder of a human rights movement: "They're eating raw rice and beans only. They just soak them in water. There's some nut paste, but very little. The way America is trying to strangle Venezuela economically with paralyzing sanctions, so the authorities are doing it to us here".

But activists don't feel discouraged and continue to ensure — as they say — "the collective defense of the embassy". They spent the last 24 hours without electricity again, encouraging each other with songs by candlelight.