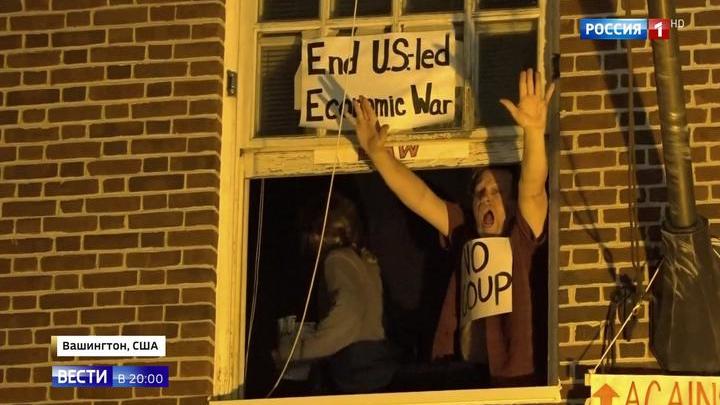 The Venezuelan parliament, controlled by supporters of Juan Guaido, is now surrounded by the special forces of the national intelligence service. The security forces, who didn't go over to the side of the impostor, don't let the MPs inside. They use police shields to keep at bay those who are trying to force their way in. The official reason for blocking the National Assembly is explosives, which are being sought on the instruction of Maduro. On the instruction of those who still dream to overthrow him, they're also searching for a Venezuelan connection in Washington.

Alexander Khristenko has the details.

The US authorities are losing their patience. They seem to be unable to put up with a situation in which the US's appointee, the self-declared president Juan Guaido, can't take power, not only in Caracas but also in Venezuela's embassy in Washington. The embassy is still controlled by supporters of Nicolas Maduro. Today, for the first time, police and Secret Service agents entered the embassy's premises.

Under the protection of agents, firefighters used portable hydraulic shears to cut the locks that the activists hung at the main entrance. Then, the Secret Service agents shone flashlights through the door for a long time, trying to find supporters of Maduro in the darkness. It's because, on the instruction of the State Department, the city authorities cut the electricity and then the water. Moreover, the police arrested those who tried to bring food inside.

Thus, the American authorities completely blockaded the Venezuelan embassy, ​​trying to smoke out those who support Nicolas Maduro.

"I, like everyone here, just want to protect our embassy from illegal occupation".

As a result, the police left the building and put up a warning sign that the people inside were breaking the law. At night, a few supporters of Guaido stayed on duty at the embassy.

- Do you think that Guaido will take power?

- That's why this is all happening. It's because he took power. He's the new president.

Supporters of the self-appointed president Guaido are already talking about their first victory, even if it's just here.

Alexander Khristenko, Nikolay Koskin for Vesti from Washington, the USA.