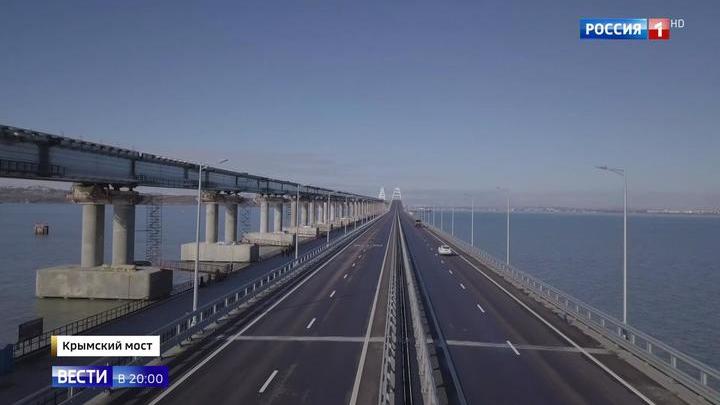 It's the longest one in Europe and one of the most stable ones in the world. Today, the Crimean Bridge has been operating non-stop for a year despite storms. It made the decisive contribution to restarting tourist flows to the peninsula. It literally reopened Crimea, making it more convenient and accessible. The bridge became the first impression for more than 300,000 tourists during these May holidays.

This is the Crimean Bridge Control Center. It collects all the data — the wind speed, the roadway condition, and the temperature. They can see every vehicle here, even their plates. The control center has calculated that more than five million vehicles have gone over the bridge over the year. Cargo delivery has increased by a third compared to the ferry deliveries, which is a tangible benefit.

Alexander Tabarkhanyuk, truck driver: "We used to pay about $300 for the ferry. Now we are going for free".

Soon, the land gate of the peninsula will open wider — here you can see the railway under construction. This year, trains will pass here. Every day, such trains come here many times in order to prepare the railway track for work.

The Crimean Bridge is a record holder. It's the longest one in Europe. It's 11.8 miles long and consists of 7,000 piles and 595 concrete poles. The bolts on the arches alone weigh almost 500 tons. The road bridge was launched exactly one year ago. This is what it was like. The bridge is visible from space. It seems like a thin thread but it strongly connects the two Russian shores.

Kairat Tursunbekov, Head of Road Department: "It's clearly popular and essential. If you compare to 2017, it's being used three times more than the ferry".

More than 2,000 songs have been written about the bridge. Lyube filmed a music video here.

Nikolay Rastorguyev, Lyube: "It's very impressive. I recommend everyone that has this opportunity to come and go over this bridge. It's great. Never in my lifetime did I think this was possible".

Cutting-edge, environmentally-friendly technology is being used here. All the dust and dirt doesn't go into the sea from the bridge, it goes through filter equipment. The sea nearby has got even cleaner.

- Dolphins?! Where are they?

This is Mostik, the mascot of the Crimean Bridge. He was found in the street but now he's a celebrity.

- Oh, you've grown big over a year, you pretty boy.

He was found near the bridge when it was under construction. He was just a kitten, but now he's grown big. Over that time, he's become a popular blogger with thousands of subscribers. The first year of the Crimean Bridge is the year of a new quality of life for residents and visitors. It means millions of smiles and hundreds of thousands of meetings. It's a dream come true.