CNN Unhappy That Pompeo and Putin Met! Sabotage Talks With Their Russophobic Coverage! 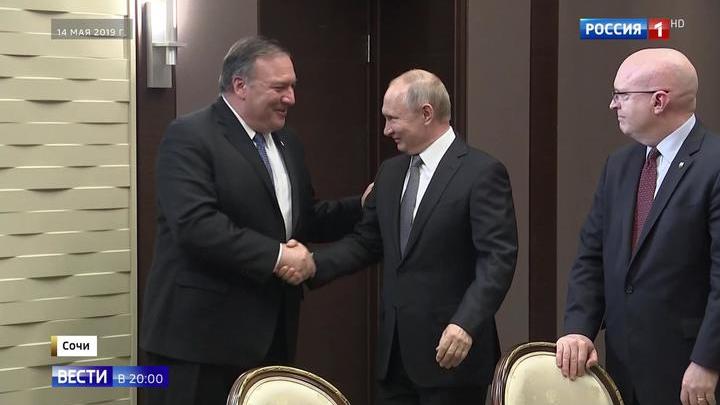 While the Austrian journalists at the Sochi conference were trying to figure out the prospects of the Nord Stream 2 as well as when and how Russia and the US were going to restore relations, their American counterparts were trying to interpret the smile of the Russian President and the reaction of the Secretary of State. Over four and a half hours, which is the total duration of Pompeo's meetings in Sochi, the parties discussed the most pressing issues, from the Iranian deal to the situation in Venezuela. However, the US media still only focuses on the one issue that never happened: the interference in the elections.

Valentin Bogdanov with the details from Washington.

Being a highly sought-after expert on the bilateral relations with Moscow is rather easy in Washington today. One only has to juggle three words: Russia, interference, and investigation. Mike Pompeo's airplane was still warming up its engines on the runway of Sochi International Airport when the ever-ready experts began going on the air.

Steve Hall, former CIA official: "Except for the nuclear disarmament treaty, I don't know why we're talking to Russia. They need to be isolated from everybody. All our Western colleagues should do the same".

On-site reports follow the same script. CNN literally pulls its analysis out of thin air. Vladimir Putin flew to Sochi from Akhtubinsk. Russian Su-57 fighters escorted Russia's Air Force One through Russian airspace. No, they were definitely threatening the US.

Such comments and reports, which are being poured down the throats of ordinary Americans, are the reason there's a pause in the relations of the two nuclear powers. By all standards of diplomacy, this is inconceivable. Secretary of State Mike Pompeo has been in office for a year but it's his first visit to Russia. However, if we look closely at what was happening in Sochi, we'd see even more. For example, the way Pompeo warmly greeted Sergey Naryshkin. Pompeo met the Director of the Foreign Intelligence Service when he was working as the CIA director. Anti-terrorism effort is one of the few fields where Russia and the US continued their cooperation, even when it seemed that their relations had hit rock bottom. Ultimately, Washington realizes that, so Donald Trump called Vladimir Putin. Putin's speech before the beginning of the meeting wasn't translated live by US TV channels, they were subtitled. But in such cases, tone matters as much as the message.

Vladimir Putin: “As you know, several days ago, I had the pleasure of talking to the President of the United States on the phone and I had the impression that the President intends to rebuild US-Russian relations and contacts in order to solve the issues of mutual interest.”

Trump called Putin after Special Counsel Mueller's investigation found nothing. The brake that was stalling any attempt at dialogue returned to its initial position.

Donald Trump: "Despite the exotic character of Mr. Mueller's work, he should be given credit for conducting an objective inquiry and reaffirming the lack of any trace of collusion between Russia and the current administration, which we described as sheer nonsense from the very start".

CNN decided to stop here. "Last laugh for Putin" is the name of the article which appeared on the CNN website several hours after the Sochi meeting. However, the Russian President wasn't joking. They should've listened to his whole speech.

Vladimir Putin: "There was no, nor could there be any interference on our part in the US election at the government level. Nevertheless, regrettably, that was one of the reasons for the deterioration of our interstate ties".

US journalists who attended the Sochi meeting started interrogating Pompeo with their favorite interference allegations. It's like there's no Ukraine, Venezuela, or Syria, no Iranian nuclear deal crumbling before our very eyes, no North Korean nuclear crisis, no INF Treaty terminated by the US, and no START, whose future is unclear. Pompeo reminded the press about all those things.

Mike Pompeo, Secretary of State: "We had a good conversation. The President was obviously well-informed about all the issues we discussed. We were able to quickly proceed to the discussion of specific aspects of various fields in which our states cooperate".

Pompeo didn't leave Sochi empty-handed. The Russian President gave him a note. The Secretary of State is awaited at the White House. Trump is meeting him in the Oval Office today at about 10 PM Moscow time.