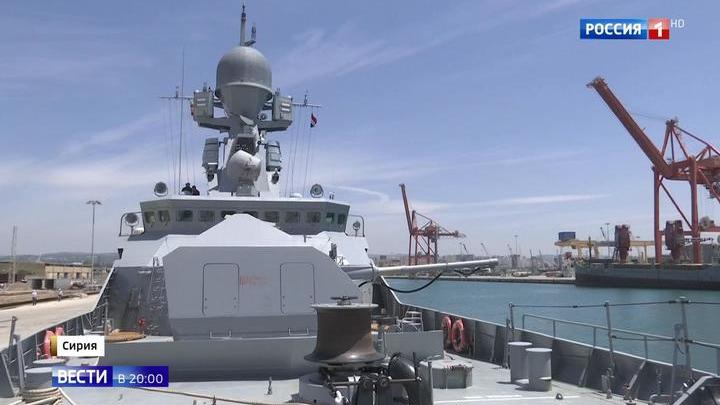 The crews of Admiral Grigorovich and Orekhovo-Zuyevo naval ships are celebrating the Black Sea Fleet Day at the Tartus base in Syria that was given over to the Syrian troops for the next 49 years free of charge. The multi-purpose frigate and the newest missile ship equipped with Kalibr missiles made a stop at the port to replenish their supplies and rest during their Mediterranean voyage. They've already demonstrated their capabilities during the maneuvers in Syrian waters.

Alexander Rudenko with the details.

An emergency drill on the Black Sea Fleet ships. The daily check of the operational readiness of the ships docked at the Syrian shore and their crews. Two Russian ships are staying on station in the Tartus port the missile ship Orekhovo-Zuyevo that was launched just a year ago and the multi-purpose frigate Admiral Grigorovich. We're standing on the deck of the latter.

The ship is equipped with extremely powerful weapons capable of engaging air, land, and underwater targets. It's the fifth operational tour of the vanguard frigate of the Burevestnik project. The crew is young but has operational experience. It was the Grigorovich whose precise launches of Kalibr missiles were successfully destroying the positions of ISIS and Al-Nusra Front in the Syrian desert.

- Have you shot those Kalibrs?

The Black Sea Fleet sailors have spent less than a week in Tartus. They're replenishing their supplies and preparing to continue their Mediterranean voyage.

Alexey Orlyapov, Orekhovo-Zuyevo: "Our main task here is to locate and track foreign vessels as well as to demonstrate our naval flag in the Mediterranean Sea".

The ships become luxury hotels for the duration of their stay. The sailors have comfortable living compartments, showers, and banyas. The canteen offers three meals per day.

"We're preparing rice porridge, it tastes like it was cooked at home".

The first course is either Siberian borsch or pea soup the second is chicken pasta and fruit kompot. And here's the service at the Fyodor Ushakov Church named after the saint revered by sailors.

Protoiereus Kirill Vovk, priest: "We sing the Russian anthem together. We provide spiritual support for the officers, strengthen their resolve. We pray that our Lord will help them".

The log church was transported from Russia to Syria by sea. Soldiers have been celebrating all Orthodox holidays here for two years now.