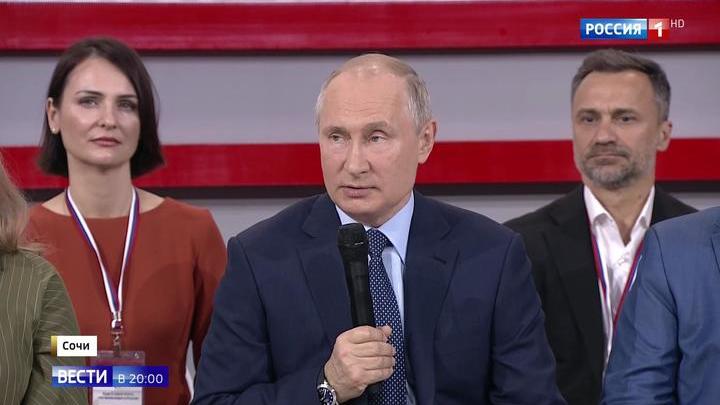 Officials from all over Russia have never paid more attention to regional media than today. Using their critical reports as an example the journalists were telling the president about the issues that concern our country. The frank conversation took place at the forum organized by the Russian Popular Front. After the questions about the quality of school meals, the situation surrounding the construction of the church in Yekaterinburg, or the phantom playground in the middle of a Ryazan forest, the president addressed the Investigative Committee, mayors, governors, and ministers.

Alexey Petrov with the details.

The discussion room looks more like a TV studio. There are journalists who have thoroughly studied the issues and RPF experts. The president even invited the ministers to help resolve the issues directly.

Vladimir Putin: "I asked my colleagues from the cabinet to come here as well. But I can't seem to... Oh, here they are! There, on the right, wonderful".

The majority of questions were related to implementing the national projects. Colossal funds were allocated so all costs must be under control.

Vladimir Putin: “What we need is not just to spend the money but to see the results of this investment and make sure that the people feel them. We must develop and consolidate this country, make it powerful, comfortable, and with prospects for the future.”

A lot depends on the regional press. Even those who left journalism for big politics, such as Vice Speaker of the State Duma, Olga Timofeyeva, are well aware of how hard can it be to obtain truth and justice.

Vladimir Putin: "Nobody likes being criticized. Perhaps only the smartest people do. Those who want to achieve actual results. The same often happens in the work of the government when we say we need to make unpopular decisions. But they are often called for. Our country, particular regions and cities need them. It's clear that they might not like something. But we must recollect our courage and do it if we truly love the cause that we serve".

The discussion about the quality of school meals isn't limited to TV shows and newspapers. Video-bloggers, including the youngest ones, are outrageous.

- No, even your plov, dad, is much better than the school's.”

Vladimir Putin: "The dad at least tries. He wasn't too successful this time but he tries his best".

The question: Who's responsible for the quality of school meals? The supervision of school administrations is obviously not enough.

Vladimir Putin: "We can definitely take the supervision of school meals to the city council level, detaching school meal supervision from schools and increasing responsibility. That's an approach we need to consider".

The situation in the field of healthcare also requires additional supervision says the audience. Palliative care is an extremely sensitive field. Money's not the only thing that matters. Bulk-purchasing the same equipment for different clinics isn't efficient claim the participants of the forum. Targeted measures are required. Such programs have been developed.

Nyuta Federmesser, member of RPF: "We must ensure that our work doesn't slip through the cracks and federal money is spent on the implementation of individual programs".

Vladimir Putin: "Perhaps that would be more efficient than the everyone-gets-a-piece approach. I understand that. But the network that's already been established in the regions, it also must not be left without funding. That's why we need to find an optimal interworking model. We'll check the situation out and try to conjoin the two".

Medical development means a lot for the RPF.

Leonid Roshal, member of the RPF: "Speaking of firm control we take the president's instructions and establish people's supervision".

Journalists and RPF experts carefully follow monitor urban development and the actions of the local authorities. A document mismatch has been discovered in Ryazan. On paper, there's not just a playground here but an actual kids' complex that cost more than three million rubles ($46,000). The contract states that the equipment was purchased, installed, and is already being used. A truly phantom playground.

Vladimir Putin: “And here I thought such things don't happen anymore. How dare they! It happens in Ryazan. I hope Alexander Bastrykin hears us and won't miss the chance to put his professional skills to good use.”

Answering the question of one of the forum guests, Vladimir Putin commented on the situation surrounding the construction of the church in Yekaterinburg. Over the last few days, there have been protest rallies organized by those who don't want the Church of St. Ekaterina to be built in the October Square park.

Vladimir Putin: “If we're talking about the residents of that area, then we definitely need to take their opinions into account. That's what we need to do if there are no paid recruits from Moscow who arrived there to make a fuss and show off. If the protesters are locals, then we must take their opinions into account. I believe that a church must unite people instead of dividing them. That's why both parties need to take certain steps to resolve this issue respecting the interests of all local residents. There's one easy way, we can conduct a poll. The minority will have to obey the majority. That's the way democracy works. At the same time, we definitely need to respect the opinion and interests of the minority. Investors, or whatever's building it, be it the city authorities or private investors, I'm not really sure, should ensure that another forest is planted somewhere nearby in some convenient place, in order to increase the number of trees in the area instead of decreasing it. Build a park if people need one. Perhaps moms would like to take their kids for a walk there. You see, instead of playing the tug-of-war and fighting they need to sit down and talk. The city authorities, the regional authorities must address this issue and find an optimal solution for the people living there.”

The city authorities are ready to conduct a poll. It'll begin tomorrow and last for several days.

Another critical issue: A building in Penza where veterans live has broken elevators.

"The elevators in the building were replaced under the comprehensive maintenance program. The veterans can't walk too well, they're both over 90 years old and without an elevator, they can't leave their apartments".

Vladimir Putin: "We need to react quickly to such issues. I had no elevator until I was 30-something. I had to carry my neighbor to the fifth floor because she couldn't climb the stairs. That happened a couple of times. That's why I perfectly understand the people who ended up in that situation. A nasty situation, what can I say".

Another aspect: the government allocates major funds for social support. But those entitled for financial aid are often unaware of who to address and what can they actually get.

"The information about welfare and benefits is extremely hard to find".

Vladimir Putin: "The TV tells us how to grow our hair back that's an important issue for Zakhar and I but what Tanya mentioned is a thing of far greater importance".

Multi-children families often require help. Getting ready for school isn't cheap. The textbooks and workbooks that teachers insist on buying often become an excessively burdensome item of the family budget.

Yelena Shmelyova, member of the RPF: "We propose to hold an assessment of actual availability of free textbooks and workbooks in all regions of Russia".

Vladimir Putin: "A textbook and a workbook aren't the same thing. In accordance with the law, textbooks are provided for free. There must be no double-dealing or cheating. Speaking of workbooks in accordance with the established practice and the law teachers have a right to select the textbooks and teaching methods. That's why you're absolutely right. Electronic devices can be used in a better, more efficient way".

There are almost 500 guests at the media forum Journalists and bloggers discuss the issues of various regions. The conversation wasn't limited to issues, there were jokes for example, when our colleague from Vologda got the floor.

Vladimir Putin: Did you bring us butter?

After the dialogue was over, the guests didn't let the president go. That's another confirmation of how popular the new format turned out to be. After today's conversation, many officials will have to draw conclusions, primarily painful ones. The most important thing now, is that the issues pointed out by the journalists are resolved. The press promises to monitor all of them in cooperation with the RPF.