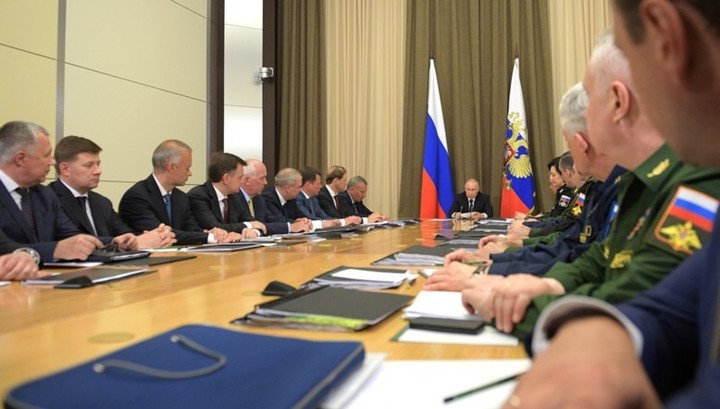 The Russian Aerospace Forces are facing large-scale rearmament. The decision to procure new vehicles was taken at the meeting of Vladimir Putin and the officials of the Defense Ministry. It was held late in the evening yesterday in Sochi. They'll be the most advanced fighter, the Su-57, the modernized Tu-160M missile carrier, and the latest-generation helicopter, the Mi-28 Night Hunter. Enterprises of the defense industry are ready to work ahead of schedule.

Dmitry Petrov has the details.

There's important news. The Russian military will get more new aircraft than was planned. It's the first time in the past 40 years. First of all, it's the multi-purpose fifth-generation fighter Su-57.

Vladimir Putin: "By 2028, we should fully equip three aviation regiments of the Aerospace Forces with the advanced fifth-generation aircraft, the Su-57. I discussed it with the minister at the testing grounds. According to the armament program, we planned to procure 16 of such aircraft up until 2027. We analyzed the situation yesterday. The minister reported to me. As a result, we agreed with the industry. In fact, the industry decreased the price of aircraft and weapons by 20%. We had an opportunity to purchase much more military vehicles. We agreed that we'll purchase 76 such airplanes without any increase in price within the same time period".

Of course, they'll be provided with the necessary infrastructure at their airfield bases. A group of six new fighters escorted the president's jet during the president's recent visit to Akhtubinsk. The Su-57 is equipped with principally new avionics and the most advanced radar. It's difficult to be discovered by a potential adversary's radars and has formidable weapons on 16 hardpoints, mainly inside, under its exterior. It's done to make it stealthier and to improve its aerodynamic performance. The Su-57 can hit surface targets, as well as aerial ones.

Army aviation will also be purchased. The Mi-28 Night Hunter helicopter proved itself well in Syria. They'll place a premium on it.

Vladimir Putin: "The Army aviation's fleet of helicopters should be promptly equipped with advanced onboard defense systems of improved specifications, and advanced weapons with increased range. By 2028, 100 Mi-28NM advanced combat helicopter should be supplied to the troops".

Designers and engineers of the defense industry work to advance the existing models of planes and helicopters. In Kazan, they'll build the advanced Tu-160M strategic missile carriers and the Tu-22M3M long-range bombers. The MiG-31 supersonic interceptor got new equipment; the Kinzhal aircraft system, equipped with a hypersonic air-launched ballistic missile which has unrivaled specifications.

Many advanced systems were tested in the Syrian skies and proved their high-efficiency. The army got over 1,000 new and modernized airplanes and helicopters in the last six years alone. Now, the share of modern aircraft in the aircraft fleet of the Aerospace Forces is 65%.