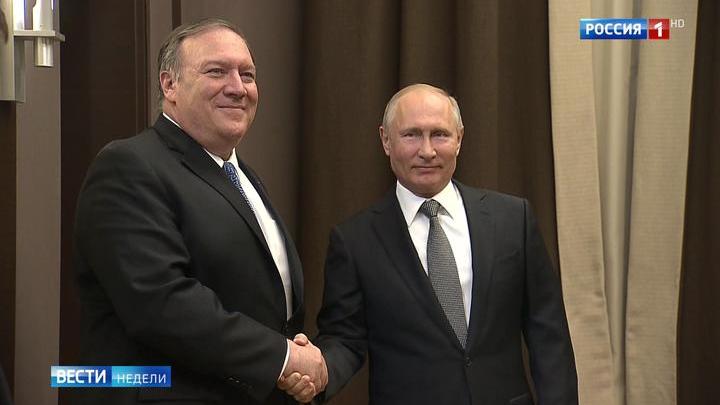 Last week, the heads of Chinese and American diplomacy arrived in Sochi. They are Chinese Foreign Minister Wang Yi and U.S. Secretary of State Michael Pompeo. Sergey Lavrov discussed with them both bilateral relations, which are excellent with China, but very poor with America, and the broader international agenda, which, obviously, included Syria, Afghanistan, Venezuela, Iran. In this respect, China also shares Russia's stance and interacts with Russia. One of the goals of Wang Yi's visit to Russia was to prepare for the upcoming visit to Russia by President Xi Jinping. Putin received the Chinese minister.

It's harder to negotiate with America. Following a three-hour meeting with Sergey Lavrov, Mike Pompeo was also received by President Putin. This was not negotiations. The hour and a half was only enough to mention the issues of mutual interest and specify differences. Pompeo was received shortly after Trump's call as his representative and messenger. A breakthrough in relations was not expected. Although, it was agreed that the presidents of Russia and the USA would meet on the sideline of the G20 in late June in Japan. On the whole, Putin evaluates this stage of the relationship with America with restraint, calmly watching the partners "ripen their position."

Vladimir Putin: "We feel that our American partners are interested in restoring relations. It’s not about us, it’s about our American partners. As soon as their position ripens and the domestic political situation changes in such a way that they can work, we're ready to do everything that we're supposed to do".

The program "Moscow. Kremlin. Putin." has more details on the Russian-American meetings in Sochi. It comes right after VESTI, and now let's see a part of Pavel Zarubin's report.

It's been a while since top American officials paid high-level visits to Russia. The delegation was shown around the house so that they could find the way. Pompeo himself turned out to be sitting in the car all that time, waiting for Lavrov. The jeep which brought the American Secretary of State has a Russian diplomatic license plate and is registered in Moscow.

Until recently, this fact, quite trivial for the organization of visits, would've been probably seen by Washington as Russian interference. But Mueller's report made the Americans feel more relaxed.

- Right from Brussels? Any progress in the relations with Europe?

- The same is said about Putin and Trump.

Lavrov and Pompeo decided to take the elevator, spending some seconds only with their closest assistants.

They would later describe their conversation as frank and useful and declare the need to normalize relations. American journalists were photographing the moon when the president's press secretary said that the meeting was about to begin and that they had to wait and see.

- How long will we be waiting?

When Pompeo was informed that he could go to Putin’s office, the American Secretary of State started to hastily fix his tie. Unexpectedly for Pompeo, the Russian president entered the hall behind him. The first handshake followed.

Vladimir Putin: "Despite the exotic nature of the work of Mr. Mueller's commission, we should still give him credit. In general, his investigation was objective, confirming the absence of any "Russian trace" or any collusion between Russia and the current administration, which we had labeled from the start as complete nonsense".

Mike Pompeo, U.S. Secretary of State: "We can work together, so that our peoples could live more prosperously. President Trump wants me to convey this message".

The fact that this time the atmosphere of the Russian-American negotiations was, at least, more benevolent, could be seen by the behavior of the USA's journalists. They all used to yell about interference in the elections, and now only one person started to say something of the kind, but very ingratiating.

"Mr. Pompeo, do you have any preconditions that you'd lay down to the president concerning the release of the 24 Ukrainian sailors by the Russian Federation?"

That journalist was then Probably shocked to find out that the meeting didn't mention Ukraine at all. It was all the more surprising as Trump had already announced that he'd like another meeting with Putin. Two meetings were called off at the last minute.

- Do you think that this time the talks will definitely take place?

Dmitry Peskov, Press Secretary for the Russian President: "President Trump's and the Americans' positions on some issues are very malleable. So, we should wait for comprehensive clarification".