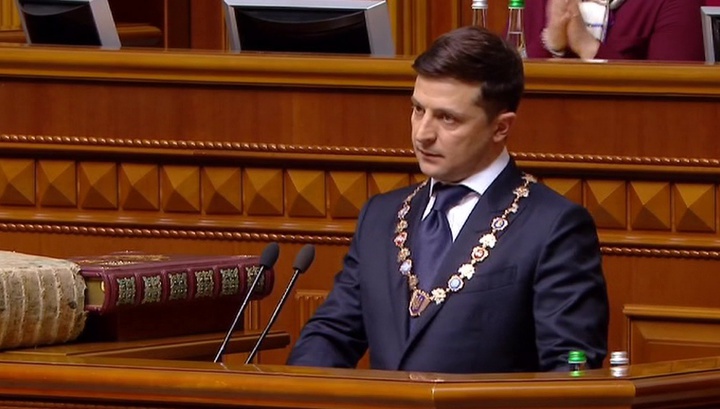 Show "60 Minutes" on what's most important.

First, we learned whom — pardon me- Zelensky kissed before the inauguration. It wasn't his wife. It was a big bold man. Zelensky even had to jump to reach him. That's the footage you're watching right now. Mere minutes before the inauguration. Zelensky is walking towards the Rada, making selfies, high-fiving voters, then giving the kiss. This is the man, his close friend and co-founder of Kvartal 95, Evgeniy Koshevoy. More than once, Zelensky performed in his underwear, and at some point, probably even without it, and today it was thrown in his face in Ukraine's Parliament. Zelenskiy dissolved the Verkhovna Rada and the Cabinet of Ministers, compared his team, which he still hasn't presented, to the Iceland national football team which comprises dentists, movie directors, actors, and pretty much everyone, except for professional athletes, but the effort they put in, yields results, even though we know that after their success at the Euro, at the World Cup in, notably, Russia, they didn't even progress out of their group, but never mind, check out the anthem written for Zelensky by his supporters.

"Remember, sooner the Podolsky Bridge will be finished than Igor Kolomoisky would waste an opportunity. The nation is genuinely excited about your coming to power. We're tired of eating really bitter chocolate. The oligarch heritage should be done away with, for your term to be a heroic sage, not a tragicomedy".

"A rope with a knot was untied. Just today, he was simply Vovochka. He popped up, like a pigment spot on the skin. And now he's President Ze".

- The end. A pep talk. In terms of the changes, Zelensky started off with harsh, repressive measures. He strictly forbade public officials to hang his portrait in their offices. Talking to the Rada, he didn't call Russia an aggressor, he mentioned neither Putin nor the annexation. One could be led to believe that he's a new type of politician, but no. It's an old type. While on the stand, Zelensky was probably scared, but right after that, as he was surrounded by his foreign friends, "in a safe place," he did start to roast our great motherland Russia.

By the end of the day, Poltorak stepped down as Ukrainian Defence Minister. This is him saying good-bye to the Ukrainians against a backdrop of the destroyed Kremlin. Oh, well... Also resigned Head of the Security Service Gritsak, while Prime Minister Groysman promised to step down this Wednesday. But who's gonna rule the country? Right now, nobody understands that, just as nobody understands how he's different from Poroshenko.

Vladimir Zelensky: “I, Vladimir Zelensky... And our first and foremost goal is to end the war in Donbass. I've been asked many times, "What are you willing to do to achieve ceasefire?" I can assure you: to stop our heroes from dying, I'm willing to do anything. I'm willing to lose my popularity, my rating, and if need be, without any hesitation, I'm willing to leave the office if that will achieve peace. Without losing our territory, ever. We didn't start this war, but we're the ones who have to end it. And we're open for dialogue, but I'm sure that the first step to that dialogue is the return of all Ukrainian captives.”

Pyotr Poroshenko: "That's what I'll bring you, as president, in the nearest future. Peace, a decentralization reform project, a guarantee of free use of the Russian language in your region, a firm resolution not to divide Ukrainians into good and bad, respect for the regions' uniqueness".

Vladimir Zelensky: "Our next challenge is the return of the lost territory. Both Crimea and Donbass belong to Ukraine, and there we didn't just lose territory, but most importantly, we lost people".

Pyotr Poroshenko: "And we're willing... We're willing to call a snap local election in Donbass that will produce dialogue partners".

Vladimir Zelensky: "And today we simply have to return their identity. We lost that identity. In the past years, the government did nothing to make them feel like Ukrainians. They are not strangers, they are part of us, they are Ukrainians".

- They understand Ukrainian, yes. Thank you so much. Thank you for continuing to divide people, Mr. Lyashko.

- Thank you, everyone. That was fun.

- That was fun, yes. Mikhail Yurievich, what was that?

Mikhail Markelov, Adviser to United Russia's Parliamentary Leader: That's A for plagiarism and D for the contents. The 65 million Ukrainians addressed by Zelensky were listening closely to his speech. Considering that today only 30 million Ukrainians live in the country, I assume the other 35 million have left because the life was too good and this is exactly what they wanted to hear. You see, in one day, this man basically decided the fate of Ukraine. He dissolved the Rada, who stood up and applauded. The Rada was very happy to be dissolved. Then he ordered the Rada to depose the leaders of the security forces. The Cabinet of Ministers is ordered to resign. Wonderful managerial decisions. Swift, rash. Clearly wise. It looks like a country of the blind led by a one-eyed king.

Gordey Belov, Activist (Ukraine): Let's look at the situation as it is. Today, President Zelensky was inaugurated. It's his first day in office. On his first day, he did something that can hardly be called nothing. He took the oath, dissolved the Rada.

- Would've been strange if he'd refused.

- Please. Let's just stick to the facts. Without buttering up to any political force, even though he doesn't have a force of his own, he plays all-in. In the words of Rasul Gamzatov…

- Gordey, aren't you scared? Without buttering up to the existing forces, while not having a force of his own, what is he gonna do?

- I'm talking. You're making fun of everything he said. But not so long ago, in this exact studio, you were hoping he'd make these decisions, and here they are.

- Not hanging his portraits?

- No, Evgeny. I mean peace in Donbass.

- We're interested in peace in Donbass and a better relationship with Russia. Everything else is your personal business.

- The key thing he said today is that he's not afraid to lose his reputation and rating for the sake of establishing peace. In other words, he's open for negotiations…

- ...with the leaders of the rebellious territories.

- He didn't say that, Gorgey, and you know that.

- We'd applaud him if he'd called from Donbass, ready to talk to Pushilin.

- Also, you Russians should learn. He scrapped MPs' immunity.

- One moment. He announced the plans. Evgeniy, it's his first day on the job.

- You don't know the difference between making a promise and getting married?

- I don't know about that. That's a Russian proverb. It's different in Ukraine. We say, "Word spoken is past recalling." Next thing.

- So many words have already been spoken.

- Another point is that today he announced exactly the sentiments the society was expecting from him. But the most interesting thing, for me personally, is not what Zelensky said, but how our brother of a nation is taking it. Forget the lack of congratulations. Whatever.

Mikhail Markelov: How should we be taking it?

- As Peskov said, "First he should establish peace, and then we'll talk". Guys, this is not a brotherly attitude.

- If Ukraine offers this hope…

- We have long stopped trusting your word, Gordey.

- You've been calling us an aggressor for five years.

- Zelensky's also calling us an aggressor.