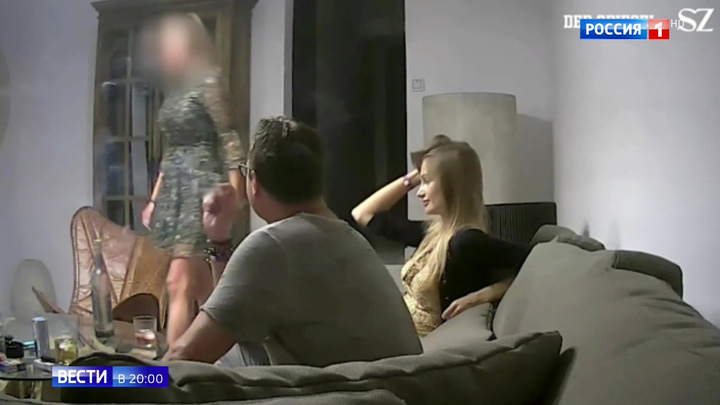 The Austrian prosecutor’s office refused to launch an investigation involving former Vice-Chancellor Heinz-Christian Strache over a hard-hitting video. But the video already did its part. Somehow the compromising material collected 2 years ago, was leaked only now, before the European Parliament elections.

The head of our European Office Mikhail Antonov is reporting on how the video was secretly filmed and the woman who turned out fatal for the male politician.

The government crisis in Austria was provoked by a "controlled leakage", when bodies or people concerned provide some compromising material to the media. The situation is unusual as this time the media themselves, Der Spiegel und Süddeutsche Zeitung, do not know the source of the video.

Leila Al-Serori, Süddeutsche Zeitung: "A few months ago we were told about this video. We were shown the first part, then we got a USB drive with all the records in an abandoned hotel. Unfortunately, we do not have reliable information about who made the video".

Anyway, the leaders of the far-right Freedom Party of Austria, Strache and Gudenus, have fallen victim to a classical frame-up. At the beginning of footage made in 2017 in Ibiza, a man in white pants, presumably the owner of the house, places two cameras in the room and one on the patio. The video shows only one man in white pants. He's German, allegedly the boyfriend of a woman who the media refers to as "Alena Makarova, the niece of a Russian oligarch," who, according to Strache, claimed to be a Latvian citizen. Her face is blurred to make it difficult to identify her. It is not clear if it was done by the authors of the compromising video or German media. There's no other information about this woman. Igor Makarov, President of ARETI International Group, who is ranked 48 in the list of Russia's richest people, is at a loss.

Igor Makarov, ARETI Group CEO: "The woman calling herself Alena Makarova isn't my relative, I don't know her at all".

The most compromising for the Austrian vice-chancellor — the part about the re-election financing of the party, the purchase of the influential newspaper Kronenzeitung in exchange for business benefits — was said on the patio. Later in the room, we can see alcohol, the men are speaking at the same time. Gudenus is trying to translate. This is the only time when the voice of the mysterious woman can be heard. Obviously, she knows what is happening.

She could've equally said: "Please, slow down, I'm putting it down". At the same time, the only person who felt something was wrong was the woman sitting to the right of Strache. This is Tajana Gudenus, her remarks were not included in the published video, but they are quoted by the newspapers.

"Gudenus' wife Tajana was the only to ask skeptically several times if that was a trap. Her husband and Strache were dismissive".

Had they gone with the woman's gut, they wouldn't have to leave the government and party positions. They're doing it out of the political culture as the Austrian prosecutor's office didn't consider the actions of Strache and Gudenus as unlawful and refused to prosecute them. An emergency audit of the party accounting also revealed no suspicious money infusions before the 2017 elections. This was claimed by Norbert Hofer who now heads the Freedom Party of Austria and who's expected to become the next vice-chancellor instead of Strache.

Norbert Hofer, head of the Freedom Party: "Yesterday, I studied all the donations made to the party over the past years, I can assure you that these are all insignificant sums".

But Kronenzeitung, Austria's largest paper, was really purchased. But it was done a year after the Austrian elections by German Funke Mediengruppe. Still, the scandal demanded offerings and self-sacrifice. Austrian Chancellor Sebastian Kurz said that the coalition government was done with. New parliamentary elections might be held early in the fall. Kurz also plans to dismiss the minister of the interior Herbert Kickl prior to the elections. He is also from the Freedom Party. But then all the ministers who passed through the party quota, including Minister of Foreign Affairs Karin Kneissl, may leave the cabinet. But it's not the best option for a politician to lead a minority government before early elections. So, the Austrian Chancellor can consider the scandal that has ruined the coalition as an attack at him and his center-right People’s Party. Moreover, it seems to be done by his old acquaintance, an Israeli political strategist who had already been working against Kurz.

Sebastian Kurz, the Austrian Chancellor: "The method reminds me of Tal Silberstein, an adviser to the Social Democratic Party of Austria during the election campaign of 2017. He used similar methods all around the world".

Besides being suspected of money laundering, document forgery, and fraud, Silberstein is known to have designed the schemes for shady financing of the Israeli elections. He also took part in the 2014 presidential campaign of the Ukrainian politician Yulia Tymoshenko, which turned out disastrous for her. He's likely to have established multiple contacts when working in Ukraine, including Russian-speaking women. If Silberstein, whom Chancellor Kurz wouldn't have recalled for nothing, is really behind the provocation against the Austrian government, then he can consider this a great professional achievement.

But strategists don't feed on enthusiasm. Who's the mastermind then? The range is very wide as shortly before the elections to the European Parliament the video made 2 years ago has come in handy for all political forces except for right-wing eurosceptics.