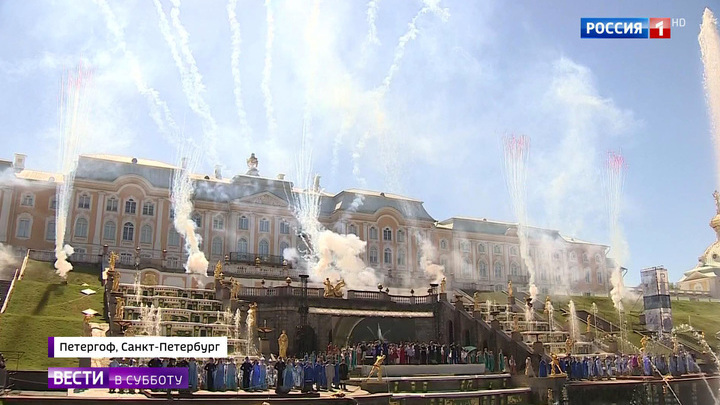 But let's get back to Russia. Today, there was a festive show in the kingdom of fountains. It's an opening day in Peterhof. But there are entire fountain facilities in St. Petersburg itself. But what does it mean to the city community and tourists?

Our staff correspondent from the Neva's banks Yekaterina Fisenko has the answer.

This is how summer starts in the northern capital. When a 50-foot jet spouts out of the lion's mouth to the city’s anthem. Samson ripping the lion apart has yet again become the main character of the water spectacle. It all shines like 300 years ago when Peter the Great ordered to lay out a park with rock and bronze statues. This has become a tradition — to hold a festival when opening the fountain season. This year marks 220 anniversary of the sun of Russian poetry, which means that on the Grand Cascade, there is the whole encyclopedia of Russian life. To the poems of Pushkin, the water flows through the ancient pipes and is thrown into the sky.

The fountain capital begins, the northern capital continues. St. Petersburg is murmurous. If you take out all the noise of cars and crowds, and the northern capital will sound flowing, dripping, splashing. Rivers, canals, fountains are the places to rest about in the big city. This is a small, intimate fountain. The historical bowl of unpolished granite, its seams according to the old technology are lead-sealed. But this 150-year-old fellow is equipped with a modern device to prevent splashing over the passers-by in ever-windy St. Petersburg.

Oleg Murtazin, water services company: "The system signals to the pump to stop, the water jet subsides, and the fountains remain calm with only the water level in the lower bowl".

Now there are already 53 operating fountains in the city on the Neva. The first put into operation were the ones in Aleksandrovskiy Sad and near the Hermitage Museum. They're monuments of cultural heritage. Specialists bit by bit collected technical information and studied the history of fountains.

The infamously treacherous ground waters prevent from getting inside the fountain now. But under this bowl, there's another one upside down, in the form of a dome. In the 19th century, the heart of the fountain beat there — steam pumps drove water from the Neva and threw jets up. Now they're not there, replaced by basic electric pumps that circulate the water. It's been treated like a human being — there were injections into the brick vaults and ointments on the joints of the pipes. Fountain economy of St. Petersburg requires tremendous attention.

Alexander Beglov, Acting Governor: "We asked the citizens to point out which fountains in different districts need repair in the first place. Today, we have begun repairing them. There are three fountains on our schedule, and we're going to repair them by the end of the year. The number will grow. Because St. Petersburg is a city of fountains. Every single fountain should be repaired and operating".

The tradition of gathering people for the festivities has been going on since the times of Peter the Great. The emperor ordered to amaze the respectable audience. But the same applies to St. Petersburg. The thousands of jets give it a new status. The city on the Neva, it is also the city on a hundred fountains.