BREAKING! US Using Islamic State as Reason to Keep Toes in War! Prolong Suffering of Syria! 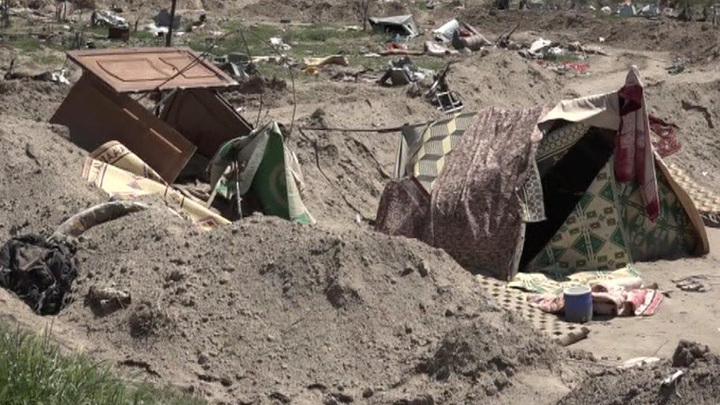 Anton Stepanenko with the details on the situation in the territories that were seemingly free from militants.

This is all that's left of the last foothold of the Islamic quasi-State fighters. The town of Baghouz at the Syrian-Iraqi border is now a mere name on the geographic map. The Syrian Democratic Forces (known as SDF) and their US allies freed Baghouz from both ISIS and its ordinary residents. Piles of shell casings on both sides destroyed houses, and explosion craters in the ground. In its last battle against ISIS in the north-eastern province of Deir ez-Zor, the coalition spared neither bullets nor civilians. The troops of the Kurdish-Arab anti-Damascus alliance were moving along the left bank of the Euphrates, pushing ISIS towards the Iraqi border. It took them almost seven months to liberate four towns, the last of which was Baghouz.

The liberation of Baghouz took about a month and could've taken much longer. The Syrian Democratic Forces that stormed the town once again received help from their American allies. The bombings were hard.

- Was it possible to liberate the town without air support?

- It was extremely difficult without air support. We suffered heavy casualties because even though the town is small, there were a lot of militants and civilians there.

Tens of thousands of people ended up cramped in a small area and had nowhere to flee. The Iraqi border was guarded by the border guard and the PMF Shia militia. The southern route was cut off by a natural obstacle — the Euphrates. The offensive was moving in both directions, along the border and the river.

Here's the location of the ISIS fighters' last battle for Baghouz a tent camp in the outskirts of the town. There's the Euphrates river, with the positions of the Syrian Army and the city of Abu Kamal behind it. But even in this tent camp, the militants managed to prepare good defensive positions.

Guides tell us that almost every tent conceals an entrance to an underground shelter or defensive position. That's the reason the entire territory of the tent camp is covered in craters caused by air and artillery strikes. Civilians were hiding here together with militants. Not only militants but also a lot of women and children who supported the caliphate and fled to here, Baghouz, as the geography of this quasi-state was shrinking.

“They didn't want to surrender. Even women were fighting us along with their men. I saw their corpses, armed women and men lying in the same trench. Check out how many shell casings are lying around their positions.”

The town's supposed to be safe but our guides have the safeties off on their rifles just in case. Over the reign of the caliphate, a second underground town was dug out underneath the regular one. Nobody knows who or how many of them may still be hiding in there. However, the SDF-soldiers don't take us through the towns along the Euphrates that were liberated months ago. They pass them by, explaining that ISIS sleeper cells may be active.

"Our soldiers have just begun checking the underground section. Working there is hard; entire passages and tunnels are hidden underground".

Even on the surface, mines and suicide bomber belts are still scattered here and there. The houses have been checked but we're still recommended to stay cautious. No place in the last town occupied by ISIS is guaranteed to be safe. Each building is fit-out to house a sniper or machine-gunner position. This hole looks unremarkable on the outside but there was a sniper behind the wall.

The town of Baghouz smells like death. The corpses of dead civilians haven't been removed yet. The troops don't seem to be willing to clear up the mines. Even the ISIS graffiti hasn't been painted over. The Syrian Democratic Forces that control the territory with the support of the US don't really care if anybody comes back here or not. The residents of Baghouz have moved to the Al-Hol camp, which is infamous for its catastrophic humanitarian condition. Journalists are banned from entering the camp.

Now, units composed of former ISIS fighters are being deployed here from the Jordan border by the US in order to perform partisan operations, prolonging the war, and giving the US grounds to justify its presence in the region.