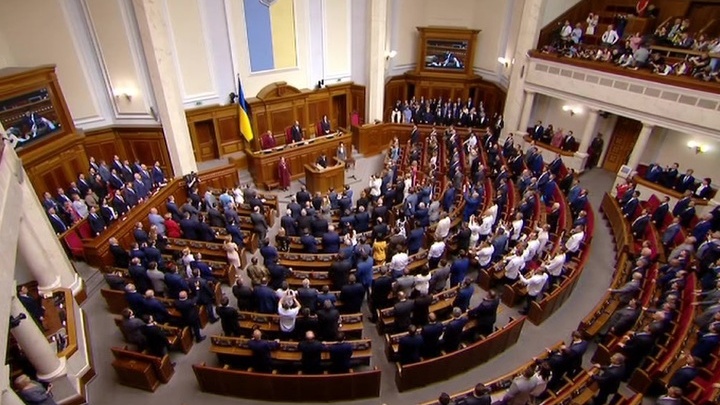 In Ukraine, a criminal case against Pyotr Poroshenko has been filed. The former president is suspected of treason because of an incident in the Kerch Strait. It was filed by lawyer Andrey Portnov, former deputy head of Viktor Yanukovych's administration. He believes that Poroshenko’s actions were aimed at deliberately provoking Russia.

Our correspondent Boris Maksudov has all the details.

You have a unique opportunity to see what the president's office looks like on the inside. Deputy Lyashko came to the meeting with the new president of Ukraine by bicycle. He was wearing sunglasses instead of a tie and holding a smartphone in his hands. The scandalous radical didn't manage to turn the political consultation into an online show — he had to leave his phone at the security post, and Vladimir Zelensky took the stunt in good fun.

- How do you feel about the early termination of powers of the Verkhovna Rada?

- Thank you, thank you for the information.

- Can I ask you a question?

- Mr. President, can I ask you a question? Vladimir, can I ask...? Why are you pushing me away?

Former President Pyotr Poroshenko is looking forward to political revenge. It seems that he is going to return to power as a prime minister. Apparently, he hopes for the help of his American friends. Here's his meeting with a senator and the ambassador of the United States. But there are serious charges which can disrupt his plans.

“Friends, today Poroshenko lost his legislative immunity and an hour ago we filed the first criminal complaint with the State Bureau of Investigation. We consider him involved in treason, in an attempt to seize state power, and in the abuse of office.

The State Bureau of Investigation opened a criminal case. The main issue is the Kerch Strait incident, which involved Ukrainian ships. According to the applicant, Poroshenko purposefully organized a provocation to impose martial law. The author of the complaint is a former employee of the presidential staff.

Andrey Portnov: "I'm really worried about retaliation. Yes, I'm talking about the retaliation that should befall the previous authorities, which had been abusing the people of Ukraine over the past few years".

It isn't clear if the former Minister of Defense of Ukraine is mentioned in this criminal case. Stepan Poltorak signed the letter of resignation. Today, in a disciplined manner, he appeared at the call of Zelensky.

Stepan Poltorak: "I've made my decision. I said about it the day before yesterday, before the inauguration, that I'd send in my resignation. I couldn't do it earlier. I waited until he took his oath and then I resigned".

Now Ukraine will wait for the new elections. This time, it'll be the parliamentary elections. The preliminary date is scheduled for the end of July during the summer holiday season.