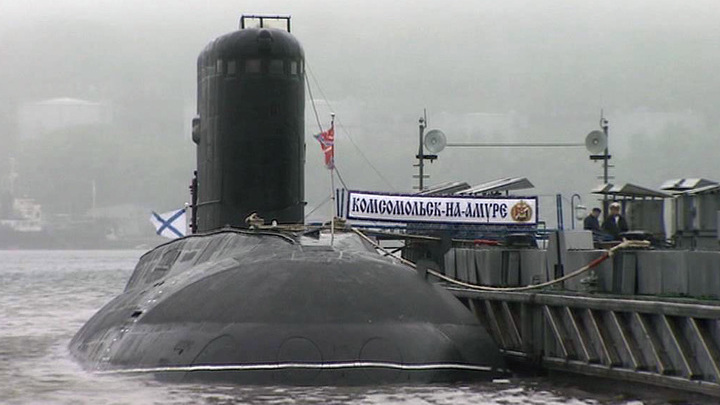 On the decks of ships, the flags have been solemnly raised. It's been 288 years since the Pacific Fleet was founded. To honor the anniversary, sports events and a concert will be held today. The Pacific Fleet is one of the largest battlegroups of the Russian Navy.

Andrey Kolesnikov with the details on the sailors' service.

The crew of the Komsomolsk-Na-Amure diesel-electric submarine is preparing to enter combat duty. The morning colors, regardless of the day or weather, is an integral part of Navy tradition. After a fundamental upgrade, this Varshavyanka-class submarine was adopted by the Pacific Fleet two years ago. Basically, the only unchanged thing is its hull. Engineers performed a thorough upgrade of the combat and motor components. The crew had to receive additional training to sail this advanced silent submarine. The training doesn't stop, even when the submarine is docked. Alexey Lanskikh, the 33-year-old commander of the Varshavyanka, sets the objectives: navigation, target location, and damage control measures. His subordinates need to train until it becomes natural.

Alexey Lanskikh, Commander: "Every day, we get interesting situations during our team building exercises or storm drills. We train both underwater and up top. The crew becomes closer to acting as a single organism, as a single family. We rely on each other."

During the recent joint exercise with China Maritime Cooperation, the Komsomolets managed to sneak by an anti-submarine ship formation that was role-playing as the opposing force. Aircraft also couldn't locate the Varshavyanka. However, the submarine later surprised its opponents with a torpedo attack, a simulated one but a demonstrative one. Another test was a joint rescue operation. The Russian submarine crew managed to get on the Chinese underwater vessel, which docked with the emergency hatch of the submarine at a depth of 246 feet. The sailors were safely transported to the surface. This was the first time this exercise was held.

Nikita Antonov, Sonar Group Commander: "It was very exciting when we had to leave our submarine. You feel the vessel undock and see it sail towards the surface while you and your fellow divers still lay on the seabed".

The submarine is preparing to go out to sea once again. In the next few days, the sailors will be practicing maneuvering and firing while on the surface.