Washington Still Livid About Nord Stream-2! Too Little and Too Late Because Pipeline Almost Done! 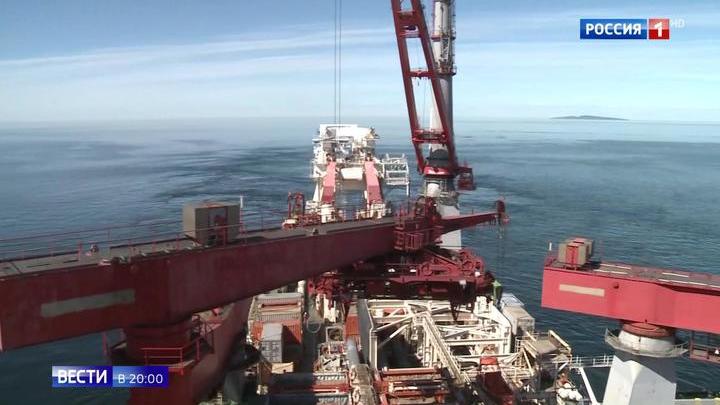 Despite the shift of power, Ukraine remains Washington's place of arms for economic pressure on Russia. Secretary of Energy Rick Perry, announced in Kiev that the Congress was about to pass a new bill limiting the activity of the companies that take part in the Nord Stream 2 project. Today, Washington announced more anti-Russia sanctions. This time, it's against two defense enterprises. From now on, Americans can't buy their products.

Our observer Tatiana Remizova is here.

- Tatiana, as for the Nord Stream 2, the pipeline is almost finished being built. Aren't the Americans a little behind time on that?

- Ernest, they aren't! In fact, it's a classic example of imperialism, when a whole continent must follow their overseas mentors' lead even though they don't want to.

U.S. Secretary of Energy Perry, who came to Ukraine for Zelensky's inauguration, today, during a closed meeting without cameras, has confirmed that sanctions will follow.

"The USA is going to adopt the bill. The House of Representatives should approve it, then it'll be submitted for the president to sign, this is the bill which will impose sanctions on the Nord Stream 2".

Despite Merkel's sharp statements that the pipeline will be built anyway, U.S. Ambassador to Germany Richard Grenell stood out, the one who once sent letters with threats to the German companies that had business with Moscow in energy projects.

"Together with 16 European countries that consider the Nord Stream 2 to be a bad idea, we should tell the German government that they can't proceed with this project. The European Parliament is now making attempts to postpone the Nord Stream 2, and we should continue applying diplomatic measures of pressure on Germany until they understand that now's not the best time to rely upon Russian gas".

The Kremlin reminded right away that an entire group of international giant companies is taking part in the project. The pipeline has been built for the most part and is advancing fast.

Dmitry Peskov, Press Secretary for the President: "The project has been implemented for the most part, and we have grounds to be certain that it'll be finalized and launched for the sake of the European consumers of blue flame gas".

- Against whom, in particular, is the USA preparing sanctions? Who will suffer?

- Ernest, the sufferers here are the European companies that are participating in the pipe-laying and maintaining, Gazprom's partners: the German Uniper and Wintershall, the British and Dutch Shell, the Austrian OMV, the French Engie, but the first to be impacted are the Swiss Allseas and the Italian Saipem that are doing the pipe-laying. The bill will concern all of the vessels that are doing the deep-sea pipe-laying for the export of Russian gas. The USA will be able to deny visas to the representatives of the company, block financial operations with these people's property in the USA, and even punish the insurance companies that are participating in the pipeline project. It's absurd but the sanctions are introduced retroactively for contracts that were signed earlier, as 770 miles of pipeline is already in place, which is about 50% of the route. The construction was authorized by Germany, Sweden, and Finland. Only Denmark is still indecisive. But, if necessary, its waters can be bypassed.

Instead of affordable Russian gas, the USA wants to sell its own expensive liquified gas to Europe. The same U.S. Secretary of Energy gave it away on radio.

"Just like Ronald Reagan, who defeated the USSR by using technology and innovation, America's innovative and hi-tech energy industry will defeat the Russians in the gas business".

Jens Mueller, Nord Stream 2 AG: "Our project isn't a handle for political speculations but an example of complex application of both local and international law. The construction of the Nord Stream 2 is proceeding on schedule: over 50% of the pipeline has been laid. All of our shareholders and investors are involved, along with 670 suppliers from 75 countries".

Here's the most recent message from Gazprom. Today in Moscow, the heads of the Russian company and the Austrian OMV discussed the implementation of the project. Let's wait for the news.

- Thank you, Tatiana! It was our observer Tatiana Remizova.