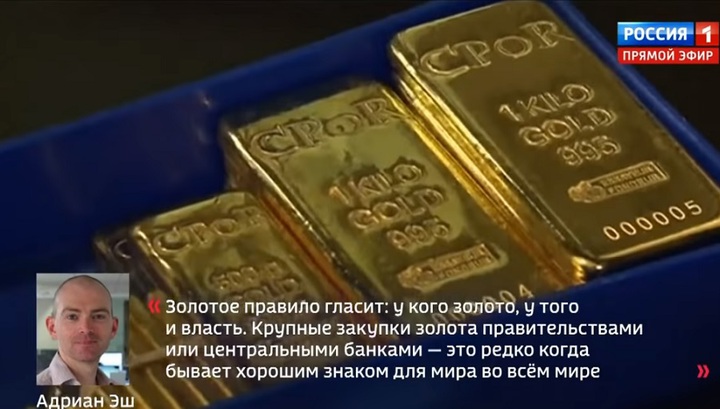 This is 60 Minutes: Hot on the Trail.

Western financial experts are panicking. Russia continues to decrease its dollar assets as it bets on gold, buying record amounts of it, compared to other countries. According to the Bank of Russia, we've purchased over 70 tons this year. Now, there are 2,183 tons of this precious metal in our international reserves. That's a lot.

- But we never have any good news without some bad news. We've stocked up on gold. But there's a problem with direct foreign investments in our country. According to the latest data from the Institute of International Finance, in the last three years, the amount of foreign investment in our economy without re-invested earnings is just 0.2% of the GDP. That's a bad indicator. Actually, we're falling behind other emerging economies and markets.

- We're in the last place there.

- Interestingly, Brazil, Colombia, and Ukraine are the leaders.

Adrian Ash, Director of Research at BullionVault: "The golden rule says that the one who has gold has the power. Big purchases of gold by governments and central banks are rarely a good sign for global peace and cooperation. Russia has already shaken up the global gold market because, in 2018, Moscow bought almost all of the gold mined in the country. It maintains the price of gold by preventing a large influx of new supply from getting on the market. If Russia continues to buy as much gold, it can outpace France and Italy and become one of the top three countries with the biggest gold reserves within a year. Gold is usually highly rated when other assets perform badly. So, like any other central bank, Russia physically hoards gold because it ensures security and reduces risks. In addition to that, Moscow views gold as a tool to limit the power of the U.S. and decreases its dependence on the dollar by using it".

- Aleksey Aleksandrovich, I have to ask you that traditional question. "If we're so smart, why aren't we rich?"

- Gold is a good thing. He said everything. In fact, speaking of the current political situation, the U.S. has already imposed sanctions against the Iranian central bank and frozen its assets. If one pays in dollars, that lettuce, all of the transactions are controlled.

- Look, the Americans supposedly build vaults and try to lure all of the gold reserves to America. "Hey guys, we'll keep this safe for you," they say. We say, "No thanks, we got this. We'll store it."

- Why do you think they're panicking? It's because if you really have gold... In the 20s, the Soviet government settled in gold only because when one's completely blocked…

- They didn't have SWIFT then.

- If they had had it, they'd have blocked it. How long have they been threatening to block us from SWIFT? If you have gold, of course, the tone suddenly changes.

- Aleksey Aleksandrovich, we're struggling with the Americans again but not for our good life in Russia.

- And now, we appear and say that we also have gold.

- That's the way it is. But economists should calculate precisely how much we need to…

- I don't think we have enough yet.

- I'll have to agree with you. There's no such thing as too much, is there?

Sergey Markov, political analyst: I'll explain it in plain language. We used to have all of the reserves in the currencies of the countries which started a hybrid war against us. Now, the Ministry of Finance finally woke up, the Security Council put the squeeze on it, and it made them sell dollars and buy gold. Judging by that chart, they applied a little pressure. We should get rid of the pound sterling and the dollar for sure.

- Our Ministry of Finance still doesn't know what to do.

- Our national projects don't have a well-developed mechanism for attracting foreign investment. Moreover, all the investments made in recent years are the result of the repatriation of our own capital back to Russia.

- We should stop this conversation.

- Back in the day, the Soviet Union didn't get much foreign investment, but things worked out.

- And the program is over. It's time for Vesti. See you. Thanks.