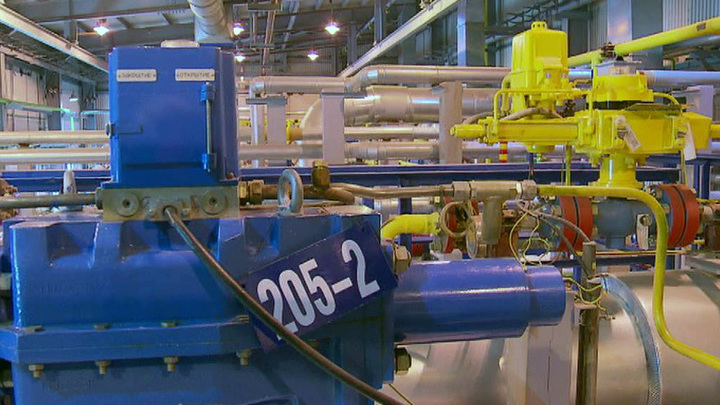 Let's start with the news concerning the construction of the Nord Stream 2 pipeline. EU investors don't intend to abandon this project. A delegation of entrepreneurs visited the gas field which will provide the gas for transportation. According to Reinhard Mitschek, the Vice President of the Austrian company OMV, the site gives you a lasting impression.

This is the spot where the Nord Stream 2 starts, the Bovanenkovo Gas Field, the largest gas field in Yamal by the amount of explored reserves. It has almost 17.5 trillion cubic feet of gas, which is twice as much as all the explored reserves of the EU countries. At the end of May, it's early spring here, the snow hasn't melted yet, and the temperature is 17°F. The gas field takes up 346,000 acres. You need a helicopter if you want to see everything in a day. But even such severe conditions didn't scare anyone away. The delegation is enormous.

Ulrich Lissek, Nord Stream 2 AG: "The reason for this trip was to show where the gas flowing to Europe will be coming from, what the conditions of its production are, and how much effort it takes to deliver the gas from here to Europe. We received requests from over 50 journalists and 40 industry experts from 12 countries from all over the world".

Present are investors, leading analysts, journalists from German, Dutch, and British media agencies along with representatives from the most famous agencies and publications, including Reuters and The Financial Times. Not long ago, some of them were shown the infrastructure of the first Nord Stream. Over time, interest in Nord Stream has only gone up.

Roman Sklenik, Latvian television: "I filmed the construction of the first Nord Stream from the platform itself, and it got me very interested. And it's very, very impressive. You'll never see such projects in our country."

Uffe Dresen, TV 2 DANMARI: For us, it's an opportunity to see what everyone is talking about so much both in Denmark and in Germany, where I also live. I've already been to Russia but not to a gas field, especially a gas field of such scale. I'm surprised by how big it is.

- Anyway, do you think Denmark will authorize the construction of its part of Nord Stream 2?

- What can I say? I think Denmark will eventually authorize it. But, of course, I don't know when. It will happen sooner or later.

An 87-mile strip through Danish territory is still a black spot on the map of the project. According to Nord Stream representatives, the current situation is not really just, from a legal standpoint. But Denmark can't refuse to grant permission, therefore, the representatives of the Nord Stream project are expecting to start work soon. The main gas field is also ready for the launch of the pipeline.

Anton Dzhalyabov, Gazprom Dobycha Nadym: "All three of our gas fields are being explored, and their estimated capacity can reach 4 billion cubic feet of gas per year. All the main sites, along with the technical facilities, are 100% ready. At the same time, we're continuing to build stage two and stage three gas wells".

A new threat is potential U.S. sanctions, which have been announced by U.S. Secretary of Energy Rick Perry during his visit to Kiev. But the experts seriously doubt that they can be put in place immediately.

Danila Bochkarev, East-West Institute: "I think it's too early to talk about the introduction of any sanctions. They've been pending since 2017, nonetheless, none of the investors has withdrawn from the project".

At the same time, the benefit for European countries such as Germany is obvious.

Danila Bochkarev: "First of all, it's profitable for Germany's chemical industry. It depends on cheap gas, on access to cheap gas, otherwise, it can't maintain its competitiveness with American and Chinese companies".

Murray Douglas, Wood Mackenzie: "Russian gas is very important for Germany as a whole and for its economy. It keeps the German market safe and holds prices back. The entire European market benefits from it, not just Germany".

In December 2018, the Bovanenkovo Gas Field reached its estimated capacity of 4 billion cubic feet of gas per year. It's 20% of all Russian gas extraction. It's being extracted from the depth of 5,600 feet. Here's one of the rigs.

The most frequently asked question here is about how long it'll take for the gas to get from the rig to Europe. From an engineer’s perspective, there's no answer to this question, as there are too many elements to consider. But, according to the estimates given by the experts, depending on the pressure, it can take two to three days.

The basic scenario envisioned by European analysts implies that the current demand for gas will remain the same for 20 more years. At the same time, their own extraction in Europe will become twice as low. As a result, the gas deficit in Europe can exceed 394 billion cubic feet of gas. In addition, it's highly likely that a number of countries will abandon nuclear energy and coal. Therefore, you can hardly underestimate the potential of the Nord Stream 2 pipeline and the demand for Russian gas.