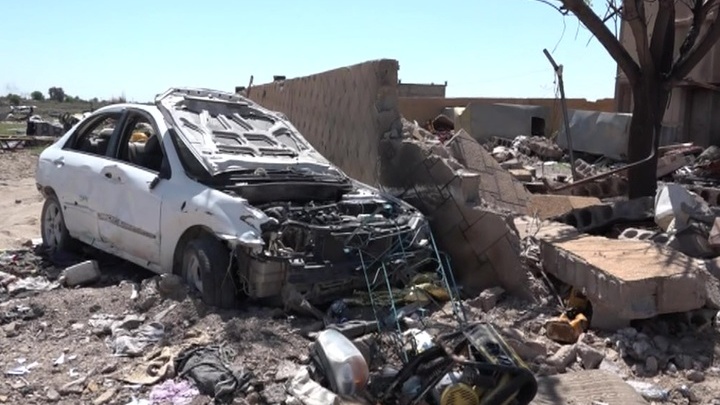 America deployed units composed of former ISIS members to the self-proclaimed Rojava region in the north-east of Syria. Previously, the Syrian Democratic Forces, assisted by their US allies, liberated Baghouz from ISIS. However, it appears they did them a favor. However, it's becoming increasingly difficult for them to control the region. The locals are beginning to resist the Kurdish structures. The town of Baghouz has been basically desolated, there's nothing left there.

Our special reporter Anton Stepanenko with the details from the town that's been razed to the ground.

This is all that's left of the last foothold of the Islamic quasi-state fighters. The town of Baghouz at the Syrian-Iraqi border is now a mere name on the geographic map. The Syrian Democratic Forces (known as SDF) and their US allies freed Baghouz from both ISIS and its ordinary residents. Piles of shell casings on both sides destroyed houses, and explosion craters on the ground. In its last battle against ISIS in the north-eastern province of Deir ez-Zor, the coalition spared neither bullets nor civilians. The troops of the Kurdish-Arab anti-Damascus alliance were moving along the left bank of the Euphrates pushing ISIS towards the Iraqi border. It took them almost seven months to liberate four towns the last of which was Baghouz.

The liberation of Baghouz took about a month and could've taken much longer. The Syrian Democratic Forces that were storming the town once again received help from their American allies. The bombings were hard.

- Was it possible to liberate the town without the support of aviation?

"It was extremely difficult without aviation. We suffered heavy casualties because even though the town is small, there were a lot of militants and civilians in there".

Tens of thousands of people ended up cramped in a small area and had nowhere to flee. The Iraqi border was guarded by the border guard and the PMF Shia militia. The southern route was cut off by a natural obstacle — the Euphrates. The offensive was moving from both directions, along the border and the river.

Here's the location of ISIS fighters' last battle for Baghouz, a tent camp at the outskirts of the town. There's the Euphrates river with the positions of the Syrian Army and the city of Abu Kamal behind it. But even in this tent camp, the militants managed to prepare good defense positions. Guides tell us that almost every tent hides an entrance to an underground shelter or a defense position. That's the reason the entire territory of the tent camp is covered in craters caused by air and artillery strikes. Civilians were hiding here together with the militants. Not only militants but also a lot of women and children who supported the caliphate were fleeing here, to Baghouz as the geography of this quasi-state was shrinking.

“They didn't want to surrender. Even the women were fighting us along with their men. I saw their corpses. Armed women and men lying in the same trench. Check out how many shell casings lie around their positions.”

The town's supposed to be safe but our guides have their rifles in the safety-off position, just in case. Over the reign of the caliphate, a second underground town was dug out under the regular one. Nobody knows who or how many of them may still hide in there. However, the SDF-soldiers don't take us through the towns along the Euphrates that were liberated months ago. They pass them by explaining that the ISIS sleeper cells may be active.

"Our soldiers have just begun checking the catacombs. Working there is hard; entire galleries and tunnels are hidden underground".

Even on the surface, mines and suicide bomber belts are still scattered here and there. The houses have been checked but we're still recommended to stay cautious. No place in the last town occupied by ISIS is guaranteed to be safe. Each building is fitted out to house a sniper or machine-gunner position. This hole looks unremarkable on the outside but there was a sniper behind the wall.

The town of Baghouz smells like death. The corpses of killed civilians haven't been removed yet. Nobody seems eager to clear up the mines. Even the ISIS graffiti hasn't been painted over. The Syrian Democratic Forces that control the territory with the support of the US don't really care if anybody comes back or not. The land is Arab. The residents of Baghouz have moved to the Al Hol camp infamous for its catastrophic humanitarian conditions. That was the moment when the American allies abandoned the Kurds, leaving them to deal with the former ISIS citizens on their own. According to the rough estimates by the UN, there are about 73,000-74,000 of them in the Al Hol camp alone. Two-thirds of them are minors. And that doesn't even count more than 10,000 captured militants. The Kurds claim they don't have enough money to feed this horde.

There's plenty of oil in the Syrian province of Hasakah. You can stick a pipe in the ground and it'll begin pouring. After the Kurds took over the region and renamed it Rojava, it seemed there was no way to refine the oil. Now, the economic welfare of their Rojava region is forged by these makeshift boiling pots.

The open field runs into the horizon. In the middle of it, like a stage prop for the iconic movie Mad Max, there's a post-apocalyptic picture with smoke pillars covering the sky. The village of Psherah alone, located not far from Qamishli has 130 oil refining barrels.

"We have 30-hour shifts. We rest when we fill one gas truck and wait for another one carrying raw oil".

Together with his partner, they get $40 per barrel. That's good money in Rojava. The extraction hasn't stopped for a day, despite the recent war against ISIS. The Kurds simply seized the Syrian oil wells, according to the law of strength. Now, caravans of gas trucks take oil to their refineries in an orderly fashion, pumping oil dollars to the local treasury. Local gas costs $2 per gallon here. For comparison, in Damascus, the price is as high as $8 if one manages to find it.

“We produce gasoline, masut, and diesel fuel. Each machine has a specific job.”

Hassan proceeds to show us gasoline with a cigarette in his teeth. The locals tend to ignore such little things as long as the sparks don't blow up the fuel.

"The gas is great, even better than factory-produced. A Porsche or a Mitsubishi will run on it. Why are you being skeptical? Not "will run", they are already running. Everybody takes our gas without complaining".

The octane number is guessed by the color. There are regular gas and super-gas, determined by color. Gasoline 92 octane is somewhere in between. Tons of raw oil that come here cost $55. A ton of diesel is sold for $110. The owner of a barrel pays a $10,000 annual tax. Working in the oil industry pays well. There are a lot of places like Psherah in Rojava. It's basically the only major industry of the self-proclaimed Kurdish region. There's even a local oil monopoly called ODE. Who owns the company, its turnover, its stock potential, share capitalization rate, whether it has shares at all — are all commercial and strategic secrets of the Syrian Democratic Forces. ODE outsources its private oil traffic, allowing others to earn money.

"It's good business. Previously, there was chaos. There were no work ethics or standards. Now, we have clear procedures: you get oil, make gasoline, and pay taxes".

There's a monthly ecology tax of $50. The business is relatively young here that's why it works the old way. There's not enough working capital to implement advanced technologies so far. Only 10% of the ton of oil becomes gasoline. The rest is waste. It goes to the air and in the ground, fire is used to dispose of the waste.

“We used to grow lentils and many other cultures in these fields. But oil pays off better. It's clear that we're polluting the soil. But that's fine, it'll regenerate after a while.”

The soil may regenerate but the health hardly will. This village is a couple of km away from the oil hub. Even when there's no smoke, the locals can determine from where the wind blows and if they'll be coughing. The most frequent complaint to the village medic: Something's wrong with the throat or lungs.

"We, the grown-ups, almost never got sick. Everyone used to be pretty healthy. Now, almost every kid has issues. I'm not qualified enough to diagnose them. But it definitely has something to do with the oil refinery".

How much goes to the Kurdish treasury how much is refined, how much is sold, and where it goes is a secret. The main thing is that anybody is free to work with oil here. The Al Hol camp doesn't force anyone to spend the pirated oil dollars on the former ISIS fighters. America doesn't force anybody, but neither does it provide funds. It's possible that the situation could've been swept under a rug like it happened in the Rukban camp, another sector of Syria controlled by the US but there are too many people in Al Hol whose living conditions are a true catastrophe. Initially, it was designed to accommodate 20,000. 74,000 live there now. 20,000 of them are the families of the former Syrian ISIS fighters. The rest are foreigners: 30,000 came from Iraq and 24,000 came from far abroad.

After sharing its victory against ISIS with Kurds, the US stepped aside from the humanitarian catastrophe at the Al Hol camp even though it still considers the self-proclaimed Rojava region its protectee. It's becoming increasingly difficult to maintain control. The primarily Arab region is beginning to resist the Kurdish structures. Now, units composed of former ISIS fighters are being deployed here from the Jordan border by the US to perform guerrilla operations, to keep the locals at bay, to help America maintain its presence in the region.