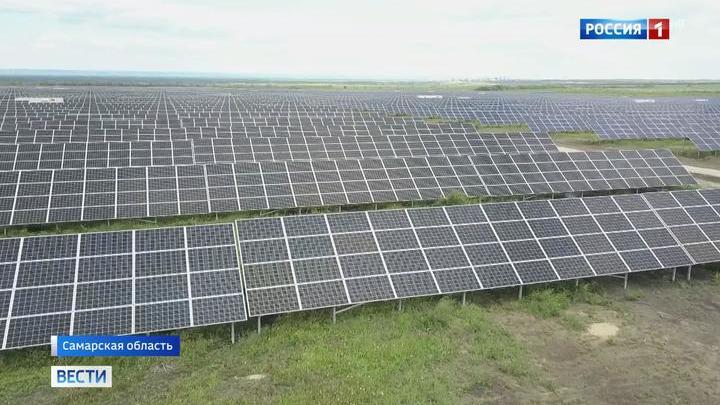 The biggest solar power plant in the Volga Region started operating at full capacity near Samara. The third and final stage of the project was officially launched. The capacity of this plant is enough to simultaneously provide electricity to two small towns with a population of 100,000. Just 15 people work at the giant park of solar panels. And it's 100% environmentally friendly.

Ruslan Bekbulatov has the details.

The Samara Solar Power Plant started operating at full capacity with a symbolic push of a button. This is the first in the region and one of the most powerful ones in the country. Under perfect weather conditions, one such solar panel produces up to 305 W of electric power. In layman's terms, that's enough for one fridge. And there are over 270,000 of such solar panels here. Samara Oblast doesn't always have clear skies, but its 2,000 hours of sunshine per year are enough to produce 75 MW of electric power when operating at full capacity.

Dmitry Senatorov, senior engineer: "This capacity allows us to enable a big enterprise or village to run its ordinary operations".

The plant is automated, and 13 people are enough to run it. The area is huge. It covers 540 acres. There are over 100 video surveillance cameras along the perimeter of the sensitive facility.

Alexander Detin, duty control engineer: “The duty electrician carries out inspections, he travels long distances by quadricycle. He can cover about 18 miles per day.”

An investor invested almost 10 billion rubles in the project. Now, the region's treasury will receive up to 270 million rubles.

Dmitry Azarov, Governor of Samara Oblast: "The company also implements such projects in other Russian regions. But the plants will be run from Samara Oblast. This is an additional boost for economic development. It streamlines the procedures for expanding capacity. It means new opportunities for creating enterprises and new jobs".

Solar electric power is green power because it works without any fuel, using only the power of nature. It'll help decrease the emissions of harmful substances by 1,500 tons per year.