Zelensky More of the Same? Little Hope For Peace in Donbass With New Ukrainian President 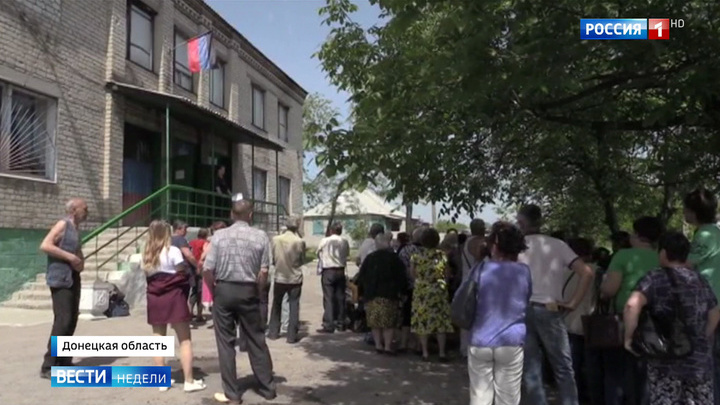 Donbass is watching the events in Kiev and President Zelensky's first statements as closely. Over the first working week, he made a big song and dance. But the statements still give little hope for resolution of the conflict in the south-east of Ukraine. But the people on both sides of the line of contact are extremely tired of the civil war.

Sergey Zenin has the details of what Donbass thinks about the new Ukrainian authorities and hopes for.

There are already a few thousand people in line for passports. Lugansk residents are leading. Here, for the convenience of the citizens, they opened another unplanned center right in the city administration building.

Accidentally or not, it coincided that these days in Lugansk, for the first time since the beginning of the war, new lava was discovered. They say they've begun to mine coal. It isn't only a coal-mining but also a machine-building region. The war tried to make adjustments, but this assembly line can't be stopped.

Here's the plant's building, built in the late 40s in the so-called Stalinist Empire style. It was very beautiful. It was burned to ashes. Somewhere over here was the director's office. Workshops were ruined with direct hits. They restored them under the shelling.

Vladimir Trubchanin, Yasinovatsky machine-building plant CEO: “During the heaviest fighting, when the Ukrainians entered Yasinovataya, and the Vostok Battalion's fighters defended Yasinovataya, we were absent literally for a week from here. In a week, they drove them away from Yasinovataya a little, and we returned to the plant and little by little began to restore what was ruined.”

The Yasinovatsky machine-building plant is one of the few enterprises that has survived, hasn't lost staff, and works at almost full capacity.

Surprisingly, it is one of the best roadheaders in the world. Like a Kalashnikov rifle, it's absolutely reliable and trouble-free. The entire Soviet subway was built with roadheaders from Yasinovataya. They supply their equipment to Russia as well. This one is about to leave for Kuzbass.

Igor Apanasenko, lathe operator: Life's more interesting when one has a job. He doesn't care if there's a war or not. What else does a person need? Work and paychecks.

Elena Byrko, lathe operator: It didn't even occur to me. How can I leave home?

"Dear Zaitsevers, I ask everyone to come up. Those who haven't entered their names will do so after the meeting. Now, we'll tell you what documents you need to obtain a passport".

Zaitsevo, Gorlovsky District, is one of the most dangerous places in Donbass where people still live. They clearly aren't going to leave for anywhere.

Irina Dikun, head of the administration of the village of Zaitsevo: "They've been fighting for it for five years, they've been suffering. They're attacked by fire, their relatives die. Their houses are destroyed".

Anastasia Khristova, resident of Zaitsevo: "We're scared. We rely on luck. While they miss, we live here. I think that they shoot every day. They use mainly small arms now. Those rifles and machine guns scare us".

Here's the border of the so-called gray zone. This house burned a few days ago, a shell hit it directly. They tried to extinguish the fire themselves but they failed. Nobody lives here anymore. Just four families live on this street. Three of them are at the market now. There's only one woman here now. This is the village of Zaitsevo where everyone will apply to obtain a Russian passport.

Valentina Moskalets lost her husband two years ago. There was a mortar shelling.

- Can you see the horizon? It's hard to see it behind the branches.

- On the right? Yes, I see sacks and a dug-out on the right.

- It's on that side. They attack us from there.

- I feel uncomfortable because of my clothes.

- You're wearing light clothes, and I'm wearing a bulletproof vest and a helmet.

- They aren't shelling so far, so you're dressed properly. I'll rush to my cellar, and you'll need to hide.

This silence won't last long. But they have to take care of their households in the intervals between shelling.

- Guys, show me which of you can scythe.

- I can try. You need to mend it. It just tramples the grass down. Honestly, I couldn't imagine that I'd go to the frontline and scythe grass. But it's just unthinkable to refuse to help the people here.

He couldn't refuse either. He's the sole driver of the only bus in Zaitsevo. Alexander Sumenkin isn't a soldier, but he's on the frontline every day.

Alexander Sumenkin, bus driver: "Our people are accustomed and prepared. Even military training can't compare with it. I drove to the hospital. Old ladies run out holding their bags. There's shelling. They don't run in the middle of the road, they run along the sides. When they hear a whistle, they squat down and count. When it explodes, they jump to their feet and run again".

The bus is covered with icons. Alexander believes that they protect him. He makes four rounds per day. Any one of them could be the last one.

"It's the last bus left, there are no other buses. Let's go. They fled".

Kiev became quite distant for these people, despite promises by the new president to end the war. There's nothing behind the words. Reconciliation is still possible, but if Ukraine makes steps forward. An exchange of prisoners can become a good start.

Daria Morozova, Human Rights Ombudswoman of the DPR: "The Donetsk People's Republic is fully ready to hold the second state of the exchange according to the formula "all established for all established", or as it's set forth in the Minsk agreements "all for all". Now, we're waiting for Ukraine to send negotiators to Minsk. Next round will be held on June 5th. We're ready to negotiate it, we're ready to hold the second stage of the exchange".

Miners have an expression, "Donbass doesn't mine empty rock". This is about empty rock and empty words. Donbass is ready to make a step. But both sides should want it.