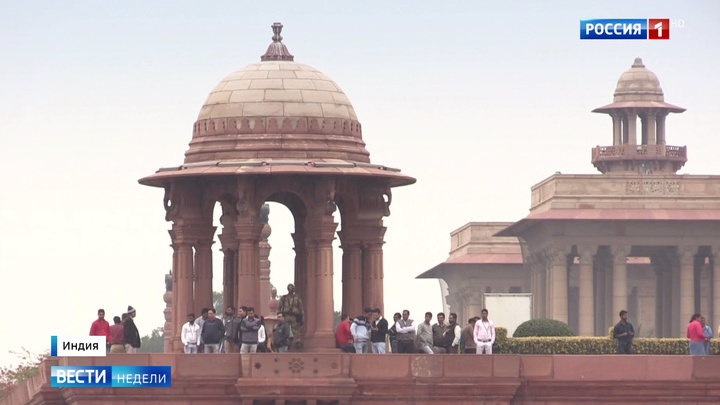 At last, the largest election campaign in history has come to an end in India. They were electing members of the Parliament's Lower House. The election was divided into seven stages and lasted over a month. Overall, 550 million voters participated. It's more than all the population of the European Union and seven percent of the world's population. Briefly, it was the largest election on the planet. The main outcome is the conclusive victory of the People's Party of India headed by Prime Minister Narendra Modi. Therefore, it will be Modi's second term as Prime Minister, and the policy of successful reforms he has started will be continued.

Dmitry Melnikov will talk about democracy the Indian way.

There are festivities with saffron, and banners with the symbol of the winning party, a lotus, are waving in the sky over India. The Bharatiya Janata Party, the People's Party of India received 226 million votes at this election. It's the total population of the five largest countries of Western Europe and it means that Narendra Modi has permission to conduct revolutionary changes in a country where claims for world's leadership go hand in hand with Middle Age customs.

Narendra Modi, PM of India: "Now, we're building a new India, and the first thing to do is getting rid of the caste system which draws us back and divides us. Now, we must have only two castes: the poor and those who do everything they can to conquer poverty."

One of the thousands of Indian castes is dhobi, or washermen. Only men can perform this hard manual labor. This social division goes back into the prehistoric age. According to Indian tradition, the highest and the lowest castes can't eat together, touch each other or start families. Safa and Karnevali, the caste of cleaners and garbagemen, are also untouchable, Dalits. According to official data, 17% of the 1.5 billion population state are Dalits.

The world's largest democracy's constitution doesn't officially recognize the caste system. The government has to get rid of the relic of the past from the above, so to say.

It's the downtown Indian capital. In New Delhi only, two million people live in such slums. And this is what considered to be decent housing. One of Narendra Modi's promises before the election is moving all these city bottom dwellers to new houses with running water, gas, and bathrooms.

"There are six of us in our family. Here's the bed, we sleep here. To be exact, the three of us sleep in the bed, and the other three sleep on the floor".

The construction works are underway next to the haphazard make-shift cabins and will be completed next year.

Feeding the starving and simultaneously being a country with a market economy and claims for leadership both in the Space and digital technologies, it's an enormous challenge Narendra Modi is willing to take up.

Gupta, Strategic Research Foundation: "Fighting poverty is crucial. But the government will have to take into account the interests of those who fund this fight: the taxpayers from the middle class who want to see the development of infrastructure, industry, and technology".

Three trillion dollars of the Indian GDP are to become five trillion. Narendra Modi is up for big challenges. His ambition is depriving China of its title of the world's assembling plant and developing the country's own technologies.

The Made in India program, launched during his previous term as the PM, hasn't reached the expected capacity yet. Yet, the results of the nation-wide vote show that the people have believed in the depicted great future.

Bollywood played its role in this election. In India, cinema unites everyone. The People's Mother, the star of TV-series back in the past, is the star of the political scene now. Smriti Irani is the woman who defeated the principal Modi's opponent, the leader of the National Congress Party, Rahul Gandhi, in the town of Amethi where the Nehru–Gandhi clan had won for four decades in a row.

Priyanka Upadhaya, political analyst: "Modi's party was the first to propose a clear program for the future, while the Congress Party was still dwelling on its achievements of the past as well as the names of the heroes of the past. This was a critical difference".

Perhaps, now is the first time when the country hasn't yet seen but has already felt its prospects and its strength for a break-through.

One of the main keynotes of Narendra Modi's first term as the PM is the search for the new Indian identity. What place is there in the world of the future for one of the most densely-populated states on the planet? India wants to choose this place for itself. This is what the PM's words imply when he speaks about cultural nationalism and national pride, and, by the look of things, he's supported by all the strata of such diverse Indian society.