Kiselev: England Weeps… or at Least Theresa May Does! Tory PM Resigns After Failing to Brexit! 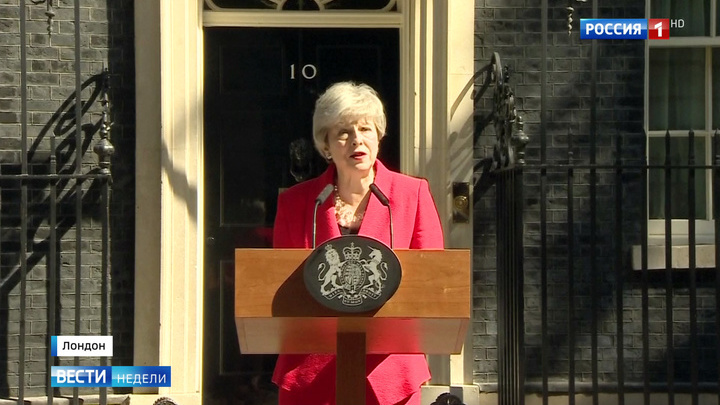 Last Friday, Theresa May announced her long-awaited early resignation. In fact, she'll stay in the residence of the prime minister until her successor is elected. But we can already state that she's leaving the country divided, politicians at a loss, and observers with a full sense of the absurdity of what is happening.

At the end of the pathetic speech about her resignation, May burst into tears, quickly turned around, and disappeared behind the doors. During her three-year career as prime minister, Theresa May scolded Russia a lot and, in general, without any proof. She managed, it must be admitted, to temporarily harm us, although the historians of the future will probably laugh at how she did it.

What do we thank Theresa May for? We thank her for that she inspires the gender that used to be considered weak. Many, however, think that she harmed ambitious ladies by her example. But Theresa May is sure of the opposite.

Theresa May, Prime Minister of the United Kingdom: "Sometimes, there are extremely complex women in politics".

Our staff correspondent in London, Alexander Khabarov, has the details of the extremely complex woman and Great Britain's prospects.

They wanted Theresa May to resign for so long that when she finally came up to announce it, many people, including her supporters, felt relief. But it wasn't easy for her to leave power. At the end of her speech, she even burst into tears.

Theresa May: "I do so with no ill will, but with enormous and enduring gratitude to have had the opportunity to serve the country I love".

Of course, Theresa May cried not for the country but herself. Before the resignation, The Daily Telegraph presented a ferocious psychological profile of the departing prime minister. The newspaper's sources from May's close circle told a lot. They said that the vicar's daughter thinks only in black-and-white terms, how she can treat people with contempt. But the main thing is that power means everything to her.

"She's much more into the status of having the job than most people would have thought about her. People think it's all about duty and public service but she does enjoy the trappings. Her whole political life has really been about her. She's never done ideas. She does ambition. Everything in her life has been dominated by one thought — being prime minister".

Almost three years in the prime minister's chair turned out to be a total catastrophe, starting with the lost 2017 elections. There was huge employee turnover in Theresa May's cabinet. Over 40 ministers and their deputies quit. She had a strong start, promising an impeccable Brexit. But she failed to complete the main task of her tenure. And we can't be sure that Brexit will take place one day.

Of course, it'll be easy for a new tenant of this residence to blame Theresa May for everything. Although to be fair, it isn't only her failure but the entire local political establishment's. It was they who proposed Brexit, allowed it to be voted on, and when it came to its implementation, along with deputies, ministers, and other officials, they made a total absurdity of it. There are many who want to manage it. Former Foreign Minister Boris Johnson is in the lead. He views himself as the second Churchill. He promises to carry out Brexit, whatever it takes, no matter if they have an agreement with the EU or not. Johnson has a demagogue's reputation. He was accused of lying even when he started working as a journalist. The last time he was caught lying was the notorious Skripal case when he claimed that British chemists allegedly found that the poison was made in Russia. That statement was officially refuted.

But the Conservative Party doesn't have any bright figures other than Johnson. This party has almost lost its authority. Before the elections to the European Parliament, only 7% of voters were ready to support it. Nigel Farage, a populist, beat everyone. In the two months before the elections, he managed to create a party for which almost 37% of the people were ready to vote. There wasn't any program or manifesto. The fact that Farage's party is called "Brexit" turned out to be enough.

"This government doesn't do anything, it doesn't fulfill our will or run the country. They should leave. We have a new party that represents the interests of the British people".

It's already hard to approach Farage. His assistants strongly fear their boss being seen giving an interview to Russian journalists. It began after Farage was accused of having secret connections with the Kremlin. Under Theresa May, Russophobia was terribly inflated. The BBC depicted opposition leader Jeremy Corbyn standing next to the Kremlin and wearing a hat with a red star on it only because he thought that it's reasonable to resume normal dialogue with Moscow. Laborists now demand early parliamentary elections.

Jeremy Corbyn, leader of the Labor Party: "The reality is that the new leader of the Conservative Party won't be able to determine anything. Our people should be given another opportunity to determine who and how should run this country".

The ruling Conservative Party doesn't have a majority in the parliament or a sound program on how to overcome the crisis which they provoked themselves long before Theresa May came to power. The prime minister of Ireland described the current situation very accurately.

Leo Varadkar, Prime Minister of Ireland: "We see that Brexit consumed British politics. And it'll remain in this state for a very long time".

We can't rule out that Theresa May isn't the last intermediate link in this way. She still remains in her office so that she can receive Donald Trump on June 3rd. The relations with him are unprecedentedly complex. Trump has a bitter grudge against London because, on the eve of the 2016 presidential elections in the USA, they prepared a scandalous dossier, claiming that he was recruited by Russia. Christopher Steele, a former British intelligence officer, was the author. As the investigation by American Special Counsel Mueller found, the documents were fake. Now, it turns out that before being sent to the U.S., they were studied by the heads of the British intelligence services in detail.

"They treated that dossier very seriously. If the heads of the intelligence services studied it, it means that it was considered to be something substantial, while Trump said that it's a fake and fiction. Sources in the government state that they never reported to Mrs. May about that dossier. Intelligence services officials preferred to keep that information secret from her. We don't know why".

It's hard to believe in the intelligence services' independent actions. However, after Theresa May leaves all of her posts, one can blame her of that dubious story if he wishes. Besides, Trump was invited personally by Queen Elizabeth II.