What About the Militias? Ukraine’s New President Has to Deal With Dedicated War Fanatics! 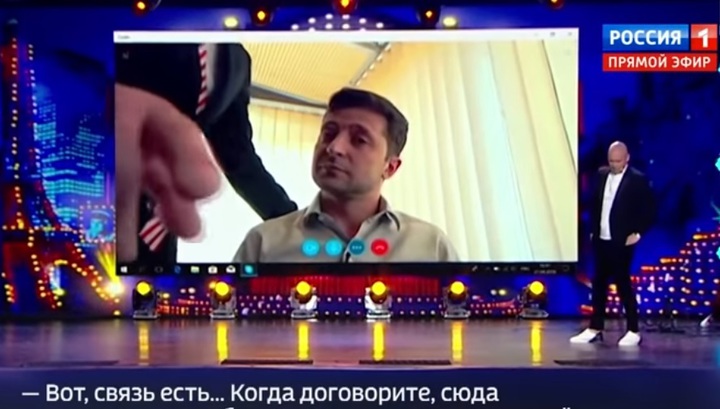 - Well, actually, if a peaceful and prosperous neighboring state was led by such a funny and frivolous president who severed ties with the IMF and paid us back three billion, of course, we'd enjoy it and have a laugh together with him. But there's a slight problem. It's the civil war in Ukraine, which has claimed the lives of 13,000 people. Today, for instance, the village of Zaitsevo was shelled, under the new president, Zelensky. To put it mildly, it's not a laughing matter, while it was proposed today to execute Zelensky himself, which isn't very funny either. If this is what you call libertarianism, it's frightening and looks more like anarchy. We're really worried about the people who live in Donbass.

Dmitry Yarosh, commander of the Ukrainian Volunteer Army: "His statements about peace at any price are dangerous. Vladimir has no idea of this "price". I wish he realized the price he's speaking about. Does he think we shouldn't take revenge? I don't care about the opinion of a bunch of simpletons as this state doesn't belong to the rabble. It belongs to the warriors who have died for it every day for over the past five years. It's our state, and we aren't going to give it to passers-by. In his inaugural address, Zelensky said he was ready to lose his ratings, popularity, post. But he'll lose his life. He'll hang from some tree on Kiev's main street if he betrays Ukraine and the people who died during the revolution and war. It's important that he understands this".

- Well, we warned Zelensky that he shouldn't mess with the radicals. What a sticky situation. He didn't make friends with Putin, restore relations with Russia, or stop the war in Donbass, but they're already promising to hang him.

Leonid Kalashnikov, CPRF, MP: You're like a fairy godmother. Do you expect him to rectify the situation in two shakes of a duck’s tail? But we're experts. Our task is to make suggestions or recommendations, which he is free to consider or not. But, certainly, Zelensky isn't a fool. Putin wasn't a fool either when he took office in late 1999, when he led our country in the late 90s, which was in pretty much the same condition: civil war, no opportunities to pay back its debts. Kirienko was no fool either. Now he's the First Deputy Chief of Staff, and then he announced that default. These people aren't fools and they do understand what advice they give. Take Lukashenko. Is he a fool? They have no oligarchs, just Lukashenko. If you don't keep a low profile, you're in exile. What I mean is... Zelensky has some examples to follow. I mean those people who took the decisions you're presenting. And Kolomoisky isn't a fool either, I'll give him that. I'd say he's greedy, aggressive, he once proved his hostility in Dnepropetrovsk. He's also a comprador who turns out to have no motherland. He can live here two years, then in Switzerland, etc. But he's not a fool, is he? Of course, he's shrewd, since he's made his fortune. Yesterday, I…

- Why is life so bad if everyone is so smart?

- To date, it's the civil war, the previous oligarch taking no measure to stop it over the past five years. He only took loans from the IMF over these five years. We all saw it.

- So, we should all turn on Laughter League and have a laugh, right?..

- He hired Primakov for a year or so, and when he started to get over the mess, he fired him. We all saw it. And then you wonder why their life isn't so good. Yes, their situation is bad. Do you want him to take responsibility for them? Yesterday, I spoke at a television program. I almost predicted Yarosh's statement. I said: "Do you think they can't kill him? They will! Presidents are killed, even in America."

- The best-guarded presidents were killed. So, he's in danger too.