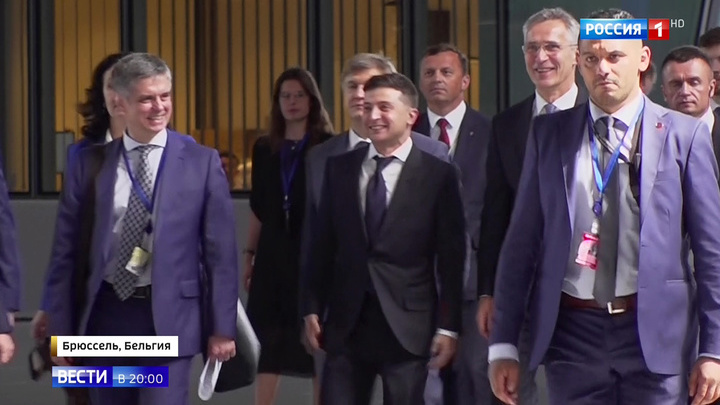 The president of Ukraine had a "bride show" in Brussels today. That's Zelensky's first official foreign visit in the new status. He says that it's supposed to reaffirm Kiev's intention to join the EU and NATO.

Our European reporter Anastasia Popova with the details on who Zelensky was shown to in Brussels.

Alliance soldiers cross the Danube, proceed to capture an air base, fire Patriot and Stinger missiles at their enemies, and repel the offensive of their enemies together. At the international NATO exercise in Romania, the Ukrainian paratroopers played a modest role. They had to execute any combat orders of the Alliance Command and learn to set tasks for their personnel. The Alliance sends a message to Kiev that it wants to cooperate more closely.

Ukraine is ready, said President Vladimir Zelensky at the Brussels HQ. He kept looking in the text struggling with the English pronunciation. His first meeting with Secretary General Jens Stoltenberg was only 30 minutes long. The declaration was prepared in advance. The Ukrainian president didn't change his rhetorics. Once again, he voiced groundless accusations against Russia. Journalists were allowed to ask two pre-coordinated questions.

Vladimir Zelensky, President of Ukraine: "The ongoing armed Russian aggression is the main challenge for the Euroatlantic security. One of our mutual objectives is to ensure stability and security of the Black Sea, which requires additional efforts of the Alliance".

Jens Stoltenberg, Secretary General of NATO: "Mr. President, you have a very important task to implement key reforms that will ensure the prosperity of all Ukrainians and get Ukraine closer to joining NATO".

"Galloping through Brussels" is what the media called Zelensky's first foreign visit. His meetings were brief, he was unable to discuss anything in detail. In the end, there were no results or agreements. Even Ukrainian TV channels didn't have a live broadcast of their president's visit. At his meeting with President of the EU Commission Juncker, there were no questions about Zelensky again.

- Do you miss Poroshenko?

Jean Claude patted the new one on the back. Previously, he patted the old one on the head with gratitude for being decorated with the Order of Yaroslav the Wise. Poroshenko's administration said Juncker was pretty sad when it was time to leave because he bonded so much with the previous president of Ukraine. But it appears that the president of the EU Commission doesn't really care if the president is old or new.

The controversial agenda, the discussion of the strategy to return Crimea, the EU financial aid, and the Minsk Agreements are all a sham. Almost all officials with whom Zelensky had a chance to talk are resigning in a couple of months anyway. The European elite will renew. It means he'll have to establish contacts to the new people from scratch.