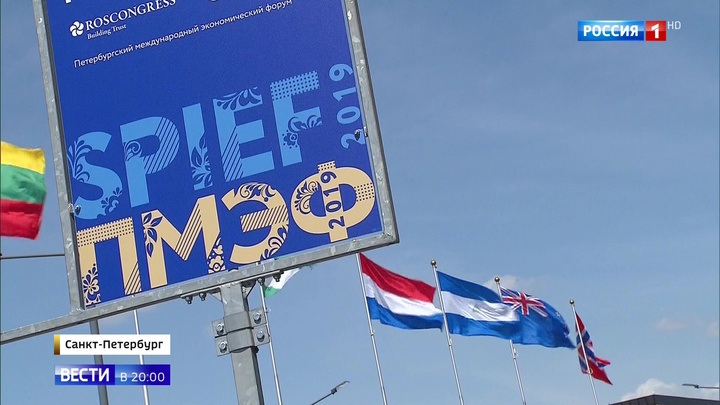 Leading politicians and business representatives from all over the world are arriving in Saint Petersburg. For the next three days, the city on the Neva will become the center of the global economy. The international economic forum begins tomorrow. The event's extremely popular, with 17,000 participants. Each of them has a busy business, culture, and even a sports program.

Tatiana Remizova with the details on how the Northern Capital is preparing for the forum, what the delegates expect of the event, and what the guests will eat.

It's one of the largest forums in history: 17,000 participants and 1,800 Russian and foreign companies coming from 75 states.

This year's guest country is China. The Chinese delegation, which comprises of over a thousand people, will have all navigation dubbed in Chinese. The ancient Chinese wisdom says, "Those driven by aspirations will reach any destination, be it remote mountains or faraway seas. Those riven by will know no bounds." The world economy is seeking to restore the balance that was disrupted by Washington's trade wars. What role can Russia play in this battle?

James McCormack, analyst: “Russia's interested in the Chinese market. That's why the Chinese delegation's so big. That signifies a strong relationship between your countries, which is only becoming stronger. The Chinese market is a great opportunity for Russia to grow and get away from depending on the dollar".

Maxim Oreshkin, Minister of Economic Development: "We've been discussing digital trade and access for Russian companies to the Chinese market, the same access Chinese companies currently have to the Russian market. In dealing with Germany, the key aspect of our agenda is technology. I'm talking about receiving investments from high-tech German companies and adopting their technologies".

The eagle on Russia's coat of arms looks to the east and to the west. The European countries retain the title of Russia's number one trade partner.

Pasquale Terracciano, Italy's Ambassador: "Ten large Italian companies will be represented by their top management. Eni, Enel, and Pirelli will represent Italy's energy sector. Coal and steel companies, insurance companies, and banks will also be there. We'll sign an agreement in the field of oil and gas. We also may discuss investments in small and medium businesses".

- How would you assess the joint potential of the Italian and Russian economies?

Pasquale Terracciano: "We pursue the made-with-Italy policy. Instead of stimulating trade, we supply technologies and launch joint ventures here in Russia".

The Russian economy is the subject of many discussions. How do we achieve our national development goals? Any kind of joint projects will improve the lives of citizens. It was repeatedly emphasized by President Putin. We'll achieve success by joining our efforts. How do we increase the birth rate, produce modern medications, and get rid of numerous landfills? Garbage sorting was graphically demonstrated at the forum.

"We take marinated salmon and pour fresh ginger sauce on it. We also add these edible flowers".

According to the Asian trend, there was a high-tech cultural program. The Russian Direct Investment Fund brought a unique exhibition to the Hermitage: contemporary Chinese art, created by artificial intelligence.

Over the next two days, the global markets (in a broad sense) will be closely following the forum in Saint Petersburg. The leaders of Russia and China will get a chance to meet in the Northern Capital.