Putin Sick of Corrupt Developers! Fraud to Be Eliminated With New Plan to Hold Money in Escrow! 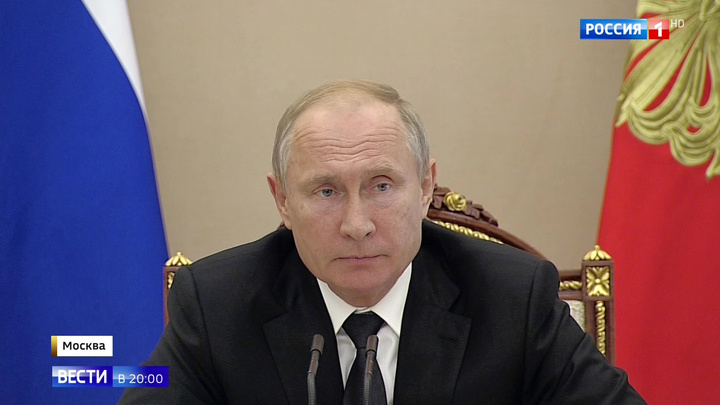 Over the next couple of years, Russia should get rid of the shameful phenomenon as defrauded co-investors. Vladimir Putin demanded this today at a meeting with members of the cabinet. The meeting was dedicated to innovations in the construction industry, but other issues were also raised. So, the president instructed to examine the circumstances of the accident at the Kristall plant in Dzerzhinsk more closely.

Our observer Dmitry Petrov has the details of the meeting's outcomes.

The president began the meeting with the cabinet with the situation in Dzerzhinsk, Nizhny Novgorod Oblast. An explosion there at a defense plant on June 1st led to serious consequences. As it turned out, there were already violations at that enterprise earlier.

Vladimir Putin: “I would like to ask Evgeny Nikolaevich Zinichev to report on the situation in Dzerzhinsk.”

Evgeny Zinichev, Minister of Emergency Situations: "A similar situation already took place. On April 4th of this year, a fire caused detonation of explosives at the same enterprise. 35 violations were revealed. The company was given an order to eliminate them. The deadline was August 26th, 2019".

- How did they eliminate the revealed shortcomings?

- The deadline for elimination…

116 people were injured in Dzerzhinsk. The minister of health reported on what help they received.

Vladimir Putin: "Veronika Igorevna, how is the situation with medical aid for the injured?"

Five buildings were ruined. Hundreds of buildings are damaged. The power supply in the buildings where about 2,000 people live is disrupted. The regional authorities began to eliminate the consequences right after the incident took place.

Vladimir Putin: "Gleb Sergeevich, what can you report?"

Vladimir Putin: "Tatiana Alexeyevna, can you add anything about schools?"

Tatyana Golikova, Deputy Prime Minister for Social Policy: "There were four schools where the Unified State Exam was to be held. 952 people were to take it there. All of them took it. Tomorrow, the exams on foreign languages and physics are to be held. 142 people and 254 people correspondingly are to take them. Two schools are prepared to hold them. There are no problems".

Another topic at the meeting with the cabinet was the transition to new housing construction rules. First of all, it concerns such a problematic area as co-funded construction. Starting on July 1st, all developers will have to switch to a financing system with escrow accounts. It's when the money in a bank account is frozen until the developer fulfills its obligations in full. They receive the money from the co-investors only after they build and hand over the building.

Over 1.3 billion square feet of housing is currently being built in Russia. 70% of them will be built according to the old rules. The other 30% will receive project financing and will begin to use escrow accounts.

Vladimir Yakushev, Minister of Construction and Housing: This isn't an easy reform, but the task to switch to project financing on July 1st, 2019 for new projects is clear to everyone. The work is getting better, and we believe that we will progress in this direction.

Vladimir Putin: You said that we'll progress along the path of the reform. How is it? At what pace? ...to lead to the logical end. And when will this happy moment happen?

- Everything that concerns those projects, which the government decree is applicable to, those projects are to be finished not later than in two years.

- Of course. There won't be such projects.

- So, I wanted you to say this out loud. You said that there won't be such projects.

Each region is carrying out its own work to introduce the new system. In some sense, it can be called educational work.

Rustam Minnikhanov, President of Tatarstan: “Developers have no experience in project financing. We have to teach them. We asked the banks to create special groups that do not refuse but rather help prepare documents.”

Sergey Sobyanin, Mayor of Moscow: “We need actual legal information from banks on all of the problems that banks and developers have. To this end, we need to either change the Bank of Russia's instructions or introduce some amendments to the banking legislation that allow the authorized state authorities in co-funded construction to have that information.”

Andrey Vorobyov, Governor of Moscow Oblast: “Sberbank is working almost weekly with our key developers. Today, before the meeting, I called a number of major developers. All of them are satisfied with the communication with the key banks.”

Vladimir Putin: You said that all of them are satisfied, right?

Putin proposes to move on, but make adjustments, if necessary, so that they don't slow down the process, but on the contrary, speed it up and make it effective.

Vladimir Putin: "We need to do everything that depends on us so that in the near future, we'll get rid of such a shameful word combination and phenomenon as defrauded co-investors. We should shift the risks from citizens to financial organizations, developers, and the state. But this should be done in a way that is not burdensome for the industry in order to not cause damage to the volume of housing and other construction. Therefore, we discussed all of the decisions we took in this area with the development business. This is a very important sector of the economy. This is one of the locomotives of the development and growth of the country's entire economy. We should approach it with caution, but it's necessary to move in that direction".

Today in the Kremlin, they also discussed preparations for the All-Russian Competition for the Best Projects for Creating a Comfortable Urban Environment in Small Towns. They received applications from 80 towns in 46 regions. They'll receive federal support.

Saint Petersburg and Moscow are preparing to receive guests from all over the world. The 16th International Tchaikovsky Competition is to begin very soon. According to Deputy Prime Minister Olga Golodets, this will be a cultural event of a global scale.