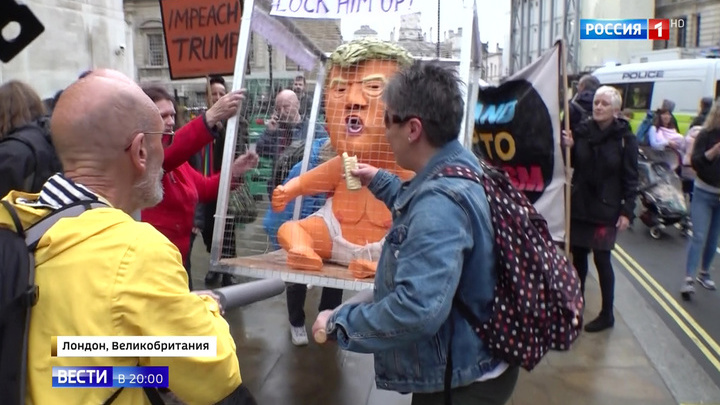 A large-scale protest is taking place in London. According to the latest reports, almost 150,000 people have taken to the streets. They demand that Donald Trump, who arrived in London on an official visit, leave their country. The residents of London pull no punches. Trump seems to have taken up the gauntlet.

Here's our London reporter Alexander Khabarov on how the US president manages to anger the host country even further.

Today's protests in London's Parliament Square began with something that has become a sort of tradition — an inflatable Trump doll. The doll was here last year as well. Today, the protesters got a new toy — a Trump doll sitting on a golden toilet. The image of the American leader was everywhere, including on toilet paper rolls.

"It's intended for people who really don't like him".

The protesters had a long list of complaints. About 10,000 people gathered in the center of London. However, Donald Trump was safely shielded from all this.

Donald Trump, President of USA: "I heard about the protests and asked where they were. I didn't see any protests, just one small one today".

The opposition leader Jeremy Corbyn, who had explicitly ignored yesterday's banquet hosted by the Queen, held a speech at today's rally. Trump said that, in fact, Corbyn had asked him for a separate meeting. However, the US president didn't find the time to meet with him.

Trump wasn't too courteous with the British prime minister either. Speaking of a full-scale post-Brexit trade agreement between the two states, he reminded everyone that Theresa May was going to retire soon.

Donald Trump: "I don't know how much time you've got left but please, stay in office for a little longer. Let's finish this deal".

Speaking in his characteristic manner, Trump promises Britain a miraculously lucrative deal. Lucrative for whom exactly? On the other hand, the US administration is trying to figure out who it's going to be dealing with. Right now, there are 12 candidates for the position of the prime minister. Trump's favorite, former Foreign Secretary Boris Johnson, hasn't managed to meet with the US president yet. He got to meet with two sitting ministers instead — Michael Gove and Jeremy Hunt. The rich selection got Trump in a mischievous mood.

Donald Trump: "I don't know Michael. Will he handle being a prime minister? Tell me, Jeremy".

The British press has already begun digesting the details of this visit. They recall how Trump and Prince Charles almost stumbled upon a pot lying on the ground and how their American guest broke royal court etiquette by patting the Queen on the back during the banquet and not recognizing the horse figurine he gave the Queen during his last visit.

London is right to wonder whether Trump considers his British visit to be successful and which of his promises are to be treated seriously. Only the permanent dweller of the prime minister residence, Larry the Cat, was blithely resting under the American president's warm armored car, having chosen the company he truly enjoyed in that situation.