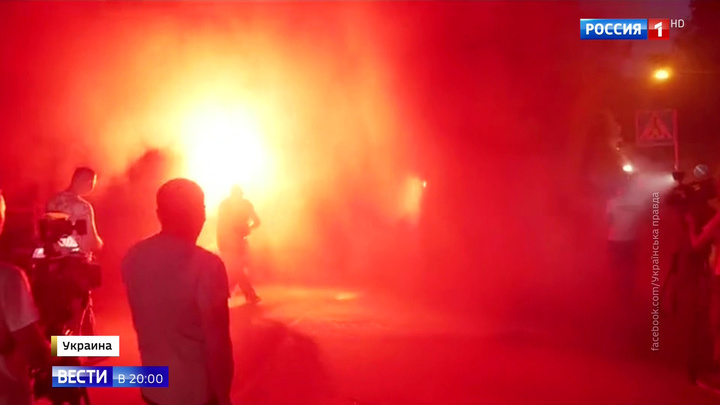 Here's the news from Ukraine again. They stormed the building of the Ministry of Internal Affairs last night in Kiev. The death of a 5-year-old child caused people's indignation. He was shot by two policemen playing with service guns. Minister Avakov stubbornly keeps silent. President Zelensky confined to a comment on social media. However, he's too busy now to solve Ukraine's internal problems. He has to discuss Russia in Brussels.

Andrey Grigoriev has the details.

Pyotr Poroshenko, ex-President of Ukraine: "We should make sure that the Ukrainian issue is included into the agenda of the NATO summit".

This is the advice of an experienced president. Poroshenko instructed Zelensky before his first foreign visit in absentia.

Pyotr Poroshenko: "Yanukovich also had a lot of conversations about European integration while we weren't simply running in circles but returning to the Russian empire".

Correspondents of the program Money found out that Poroshenko, who talked about anti-Russian sanctions only all his presidency long, sold Ukrainian accumulators to Russia via straw persons and off-shore firms.

Svyatoslav Vakarchuk, leader of the Voice party: "We need to finally create integral Ukrainian policy with respect to Russia. It doesn't still exist. We don't understand whether we can trade or not. The president should do it".

Oleg Lyashko, leader of the Radical Party: "The president, no matter what his name is, should be responsible to citizens".

The Verkhovnaya Rada today considers the bill on the impeachment to the president and the removal of the deputies' immunity.

Yuriy Boyko, leader of the Opposition Platform - For life: "They removed the immunity of our party at once The entire Rada voted. So, there's nothing that can scare us".

But the majority in the Rada supports Poroshenko. And they didn't even put the bill to a vote. They dedicated most of the time to the discussion of the tragic news about the 5-year-old boy killed because of the arbitrariness of Kiev policemen.

A 5-year old boy was killed in Pereiaslav-Khmelnytskyi. There was a gunshot, he fell, with blood pouring out of his forehead. He was hit with a bullet from a service gun whose owners amused themselves by shooting at empty bottles. The patrol officers weren't even arrested first. It caused protests all over the country.

They wrote "Murderers" near the building of the national police in Kiev. All night long, they fired flares and tires and demanded Minister of Interior Affairs Avakov to respond to them. "Avakov, scumbag, must be hung".

They ensured that the suspects are arrested for two months and the chief of the police of Kiev Oblast resigned. He asked to be sent to fight with the Donbass residents as a punishment. They got the reaction of President Zelensky.

"There'll be no commutation, no attempts to sweep the case under the rag. This tragedy should be a lesson. Those who should take care of the security of citizens should remember about their responsibility every minute".

Zelensky today was an object of a journalist investigation. It turned out that the businessmen allegedly connected with the ex-president Yanukovich were the biggest donors of his electoral fund.