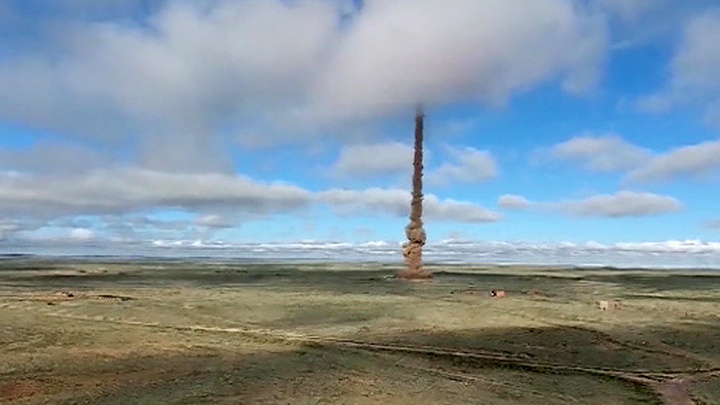 "The probability of interception remains close to zero". The US Military Watch magazine which reviews the defense industries of the biggest countries has actually admitted the absolute vulnerability of the US missile defenses against Russia's cutting-edge missiles. The huge article mentions the Avangard systems, expressing respect and concern over the fact that these missiles not only freely fall from space, but also have a maneuverable re-entry vehicle with an engine.

That's too much for Washington. The Sarmat intercontinental ballistic missile was referred to in the same way. Actually, the analysis is very interesting and thorough. Although, it's unclear why its mood is such as if Russia was about to attack the United States. It has been repeatedly stated that these arms are intended to protect Russia. It's also the case for the new anti-missile defense component, which was tested today at a testing field in Kazakhstan. It's rather impressive and, most importantly, it has no equals in the whole world.

Evgeny Tishkovets is going to tell us why it is so unique.

- What are the targets?

- All potential threats to objects on Russian territory.

The Defense Ministry doesn't reveal the name of the missile, but experts claim it's the 53T6M. This is an upgraded 53T6 interceptor missile, which was designed back in the Soviet Union. But in fact, it's a brand-new type of weapon. This test isn't the first. At least six launches have been carried out over the past years. During the upgrade, almost all of the missile systems were updated. The new version is equipped with new digital control and target information management systems. The new composition of solid fuel enables the missile to reach hypervelocity faster. In fact, the short-range missile has changed its specifications. Its range increased to about 1,250 miles. But the missile's main advantage is the new warhead. Interceptor missiles used to be equipped with nuclear warheads. Now, it's a high-explosive fragmentation warhead, which enhances the efficiency of the missiles.

Viktor Murakhovsky, editor-in-chief of a military magazine: "The high-explosive fragmentation warhead directs the flow of fragments, heavy components of the fragment cloud it's equipped with, which enables the interception of any existing or potential warheads. The fragment cloud has both prepared components and the products of the stipulated fragmentation, which creates a continuous impact zone that no target can cross, even if the missile didn't hit the target".

In the future, the upgraded missile can be used in the A-135 anti-missile system. It became operational in 1995 and is designed to protect Moscow and the central industrial area from ballistic missiles. But experts say that the new missile can also be part of the A-235 missile defense system that is currently being developed. It's supposed to have mobile launch systems, too.

Viktor Murakhovsky: "To create a mobile system implies creating a mobile computer and command center, a multichannel data communication system, a safe combat direction system, and a missile-guidance radar for the interceptors. The existing interceptor missile itself can be used both in stationary and mobile missile defense systems".

Do other countries have anything of the sort? It has no complete equals. The American GBI missile has similar specifications. But it differs a great deal, too. Firstly, the USA's interceptor missiles are exclusively silo-based. To date, as many as 44 missiles are operational in California and Alaska. Secondly, these interceptor missiles are kinetic. At first, it failed some launches. The guidance system failed, and the missiles didn't hit the targets. Today, these problems have been solved, but the efficiency of such interceptor missiles is lower than that of the Russian ones.

Viktor Murakhovsky: "They thought that 25 missiles could intercept 5-6 warheads, meaning 4-5 interceptor missiles per warhead. As I said, our approach is a bit different. Now we can rely on the "one missile, one target" principle".

And this missile can't miss the target.