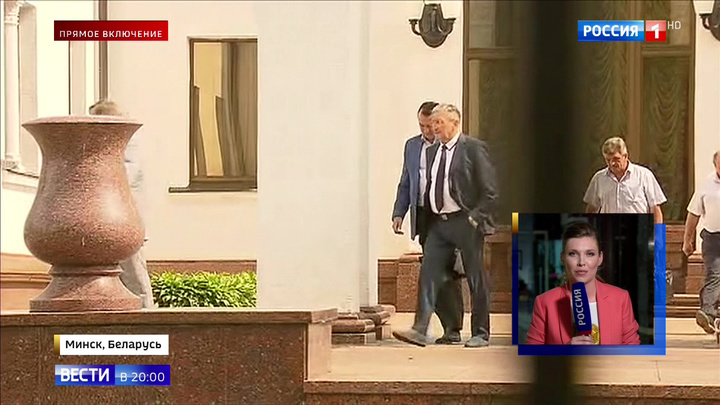 The contact group for the settlement of the conflict in Donbass gathered today in Minsk after a long break. The main outcome of the meeting is the agreement to prepare a new agreement on the state of ceasefire and start the disengagement of forces on June 10th near Stanytsia Luganskaya.

Is it much or little, given that Kiev promised some new proposals concerning a peaceful settlement? We'll ask my colleague Olga Skabeeva this question. She's been working in Minsk all day long.

- Good evening, Olga. What impressions do you have? Has that peace process got off the ground or is it too early to make any conclusions?

- Hello, Ernest. Firstly, an hour ago, the negotiations of the Minsk Contact Group ended here. They were interrupted on the initiative of Ukraine. If you remember, there were words, "You are terrorists. It's impossible to continue talking to you." Then, Irina Geraschenko ran out of that room. Any negotiations stopped at that moment. So it's a real sensation today that they managed to agree. I'll quote Mr. Deinego, a representative of the LPR in the Minsk Contact Group. "For the first time in five years, they didn't call us terrorists today. We enjoy the small things." Then, there are also important words, "We experience moderate optimism".

What did he mean? Today, Kiev formulated the idea that Ukraine adheres to the Minsk agreements but Pyotr Alexeevich Poroshenko said approximately the same thing to us. Nevertheless, the rhetoric has substantially changed. But it's rhetoric only. Will there be actions?

Donbass asked to lift the siege. That siege has been preventing any contacts between Ukraine and Donbass since 2014. It's important to note here that since the beginning of 2018, 18 people have been killed trying to cross that border at the checkpoint on the Donbass side. They were senior people. And this is the official data, which Ukraine confirmed today. Nevertheless, optimism is only moderate because all of it is just words, unfortunately. At least some first steps are necessary. In this sense, if they withdraw their troops on June 10th, then we'll be able to argue that Zelensky differs from Pyotr Poroshenko at least somehow.

Let's listen to Deinego and Mrs. Nikonorova. She's a representative in Minsk of Donbass.

Natalia Nikonorova, Permanent Representative of the DPR to the Trilateral Contact Group: “Ukraine expressed its commitment to the Minsk agreements today. But we should note one thing here. We've repeatedly heard such statements and declarations from Ukraine. Now, we should wait for them to bring those statements to life.”

Vladislav Deinego, Foreign Minister of the LPR: “Today, the work of the Trilateral Contact Group in Minsk was resumed after the break connected with the change of power in Kiev. And we have serious expectations in some directions. We probably can't say that we've achieved something real. But there's Ukraine's intention to obey the Minsk agreements again and perform the obligations it assumed.”

There's unpleasant news. We've just received a newsflash. The Armed Forces of Ukraine reported that they took another village in the gray zone. It's a direct violation of the Minsk agreements. It's also an official statement of the people, calling themselves the Joint Forces Operation. It's unclear how can it co-exist with the things stated today in Minsk at all. Can we conclude that the army doesn't obey Zelensky?

In this sense, we probably can consider the words of Mr. Kuchma pleasant and encouraging. He left the Minsk sub-group, referring to his bad health and saying that he fails to do anything there. He returned today. And here's what he said at the meeting with President Lukashenko.

Leonid Kuchma, Representative of Ukraine in the Trilateral Contact Group: I don't know if it's true. It's a positive signal, right?

- It's very positive. I should say that it isn't only my opinion. It's the opinion of many Belarusians. They were pleased with your arrival in Belarus not only because of politics. They treat you not only as a representative in the contact group.

- As for our relationship, you're still the president of Ukraine. After all, once a president, always a president.

It's highly probable that the next meeting will be held on June 19th. And on June 10th, they're to withdraw their troops. But I reiterate that these are just words so far.

- Thank you, Olga. Olga Skabeeva told us about the first outcomes of the meeting of the contact group with the participation of Kuchma.