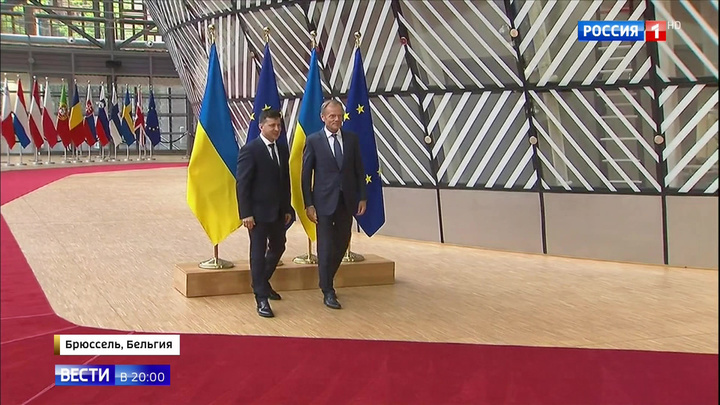 Vladimir Zelensky, who'd promised new settlement ideas for Donbass, returned to the old ideas once he arrived in Brussels. Those ideas are no different from what Poroshenko used to toss at Europe. The similarity between the two politicians' programs happened to be so obvious that Poroshenko's representatives even accused Zelensky of plagiarism.

What did the president of Ukraine want to get from Europe and did he get it in the end? Anastasia Popova with the details from Brussels. She even got a chance to ask Zelensky a question.

Be it the weather in Brussels, it's been raining the whole day, or the stressful agenda, the president of Ukraine wasn't smiling when he met with the European Council today. Journalists were arguing about in what language Zelensky talks to Donald Tusk. Neither of them isn't quite fluent in English, don't speak French at all, but do speak Russian. They were walking slowly, made three stops, and were actively gesturing. It was a standing meeting. Zelensky only had 30 minutes for office meetings.

- Do you want new sanctions?

Vladimir Zelensky, President of Ukraine: I'm busy at the moment. You can ask me questions later.

The Donbass crisis was the main focus. On the one hand, Zelensky puts his hopes In the Minsk Agreements, on the other hand, he introduces a bill in the Rada that would allow the forfeiture of property from those who accept Russian citizenship. His rhetoric is already absurdly similar to Poroshenko's. Zelensky's administration published a quote that says that Ukraine joining the EU will be the death of the Russian imperial project. Less than a week ago, the former president said exactly the same thing. Poroshenko's team immediately accused Zelensky of plagiarism.

Pyotr Poroshenko, former President of Ukraine: "A European Ukraine means the death of the Russian imperial project and a heavy blow to Russian authoritarianism".

At the meeting with Federica Mogherini and President of the European Council Donald Tusk, Zelensky requested the imposition of new sanctions against Russian officials.

Vladimir Zelensky, President of Ukraine: "Today, I informed Mr. Donald Tusk and our partners about the ongoing Russian aggression in Donbass and Crimea. I'm grateful to the EU for its consistent position on supporting Ukraine. I urged the international community to increase the sanctions pressure in order to return peace to Ukraine".

Donald Tusk, President of European Council: "The EU will maintain its efforts to protect Ukraine's sovereignty. We condemn the fact that Russia provides its citizenship to the residents of Donbass and Crimea."

Ukraine is getting five hundred million euros of macro-aid from the EU, says Tusk. In order to get the tranche, Zelensky had to renounce his ties to the oligarch Kolomoisky and swear that the talks about Ukraine's default and the crash of hryvna were mere rumors. Trying to cozy up to the Russophobic party in the EU, Zelensky criticized the Nord Stream 2 pipeline, which is economically profitable for the EU. In addition, he shared his plan to dissolve the Rada, calling their refusal to adopt his bills an insurgency.

He didn't find the time to talk to foreign journalists but he made an exception for Ukrainian ones. Sitting on an exercise bike, wearing shorts and a sports T-shirt, Zelensky was pedaling and talking about the protests in Ukraine and his meeting with President of the European Commission Juncker.

Vladimir Zelensky, President of Ukraine: "We were joking about some manly stuff, I can't say it on television. We had a cool meeting. I don't know if I can say that, it may be undiplomatic. He's a nice and friendly guy. He's very smart. He's a cool guy".

Washington is also ready to provide military support to the new Ukrainian government. The weapon supply budget for the next year was increased by up to 250 million dollars. Zelensky talked to Jared Kushner, President Trump's senior advisor and son-in-law, at the dinner reception at the US Mission to the EU.

Meanwhile, the president's wife paid a visit to the Ukrainian troops, who were having their bullet wounds treated by Belgian doctors for Belgian money. Neither Kiev nor Brussels have shown similar care for the injured residents of Donbass. It's his first "trial" visit, aimed to establish initial contacts.

The anti-Russian rhetoric remains the same. No breakthrough in relations with the EU and NATO is expected. The delegates agreed to continue their conversation at the 21st Ukraine-EU summit that will take place in Kiev in July 2019.