Xi Jinping Visits Moscow! China and Russia to De-Dollarize, Use National Currencies to Do Business! 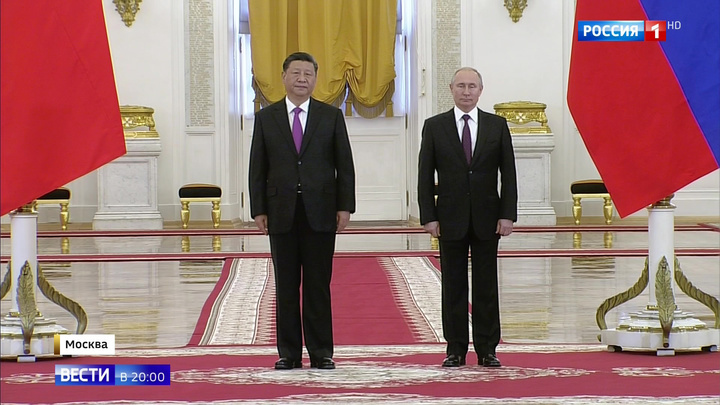 China is ready to bring its relations with Russia to a higher level. The Chinese President stated that after his plane landed at the Moscow airport Vnukovo-2. Today, Xi Jinping began his state visit to Russia. It's a visit of the highest level, according to the diplomatic protocol. It'll last for three days and has already brought lots of news. They signed about three dozen of various agreements. The presidents discussed all the key global issues. The positions of the two countries are similar or coincide on all of them.

Dmitry Petrov has the details of what it means not only for our states but the entire world.

The cavalry guard of the Kremlin Regiment froze in anticipation before the Grand Kremlin Palace. The ceremony indicates the high status of the visit and a special attitude toward the guest. Everything is ready for the meeting. At that moment, the plane with the sign "China" on its side came in for a landing at the government airport Vnukovo-2. In accordance with the protocol of a state visit, the silent drill platoon met the Chinese President. The motorcade escorted by bikers entered the territory of the Kremlin. Here's the commandant's report.

"Comrade President of the PRC, Head of the Guard Directorate of the Moscow Kremlin Major-General Udovin. Welcome".

The Chinese leader brought a large government delegation. The list of the participants in the negotiations from Russia is very substantial, too. The relevant ministers and deputy prime ministers responsible for cooperation with China gathered in the Georgievsky Hall where the official ceremony of the meeting is held. Xi Jinping walked up the ceremonial staircase. The presidents met at the state flags. They greeted each other by shaking hands. The national anthems of the countries were played.

Vladimir Putin introduced the members of the Russian government to the honored guest. After that, the leaders proceeded to the Hall of the Order of St. Catherine to begin the negotiations. They managed to exchange a couple of words.

"The eight-hour flight went by in the blink of an eye".

China is the biggest economic partner of Russia. The trade turnover is constantly growing. Last year, it reached $108 billion.

Vladimir Putin: "The unprecedentedly high level of our relations is being efficiently used for the people of Russia and the PRC to cooperate and use all of their competitive advantages from both sides for full-fledged development. I'm sure that your visit will give another powerful additional boost to the development of our interstate ties".

Xi Jinping, President of the PRC: “The Chinese-Russian relations have withstood the test of the change of the situation in the world and our countries. Step by step, we managed to bring our relations to the highest level in history. Against the background of fundamental changes, unprecedented in the last 100 years, the people of the two states and the international community place big hopes on us.”

A more detailed discussion was held in the enlarged group. The meeting of the presidents of Russia and China, the two superpowers, generates a lot of interest of the press. A huge press pool of about 100 people came from China alone. All of the world's leading media are also here. Photographers had to fight for the best place. And the best place is under the ceiling. Our Chinese colleagues are very determined and try to have it all. Although judging by their big backpacks, they've just arrived. From here, they'll proceed to go to the forum in St. Petersburg.

Here's the signing of joint agreements. There are 30 packages in various industries. There is the agreement to create a joint research institute on the basis of Tsinghua University, the agreement to build two units of the Chinese nuclear power plant. The Russian IT-company Mail.Ru Group creates a consortium with the e-trade giant Alibaba.

They're expanding cooperation in resource development. There's the Yamal LNG project. The Chinese companies work ahead of the schedule.

Leonid Mikhelson, Novatek CEO: "I'm happy that we put the Yamal LNG into operation. This is a unique project. It exceeds its project capacity, and it operates very consistently. We've achieved it together with partners".

The ministers of the two countries signed a plan to intensify cooperation in agriculture.

Dmitry Patrushev, Minister of Agriculture: "The first quarter shows that our trade turnover is higher than it was last year, so our cooperation is rapidly developing. I think that it'll go on like this".

Putin and Xi Jinping personally signed the joint statement of the negotiations. The presidents noted the similarity of their positions on the main global issues.

Vladimir Putin: "For the majority of them, Russia's and China's views are very similar or coincide. In the Joint Statement on Strengthening Global Strategic Stability in the Modern Era that we signed, we stressed Russia and China's principal position that it's inappropriate to destroy the current system of agreements in armament control, disarmament, and non-proliferation. I'll stress that our countries' positions on the situation around the Korean peninsula coincide. We're implementing the joint roadmap for settlement. We base our position on that there isn't and can't be an alternative to peaceful political and diplomatic settlement of the issues, including the nuclear one, in the region".

Xi Jinping, President of the PRC: "The global situation is currently experiencing fundamental changes that haven't happened for hundreds of years. Protectionism and one-sided approach rear their heads, the policy of force is being reinforced. We have to cover a long and difficult path to achieve peace and development".

This is a very important statement. Russia and China will develop settlements in national currencies.

Vladimir Putin: "We've just signed the intergovernmental treaty aimed at further expansion of the usage of rubles and yuan in the bilateral trade and ensuring the continuity of banking services for transactions in the conditions of instability in the global markets".

Powerful tourist flows also connect our countries. It's a mutual exchange. There were almost four million people last year. However, Xi Jinping himself could make sure of it today.

Vladimir Putin: "I told our friend President Xi Jinping... He traveled from one building of the Moscow Kremlin to another. There were more tourists from the PRC than from other countries in the square. We can come out and wave to them with pleasure to greet them".

Xi Jinping, President of the PRC: “In the past 6 years, we've met for almost 30 times. Russia is the most frequently visited foreign state for me. And President Putin is my closest friend.”

Pandas are a bit unusual topic for this format beyond politics and economy. The decision to transfer them was taken during the recent visit of Putin to Beijing.

Vladimir Putin: "There's no such practice in China. It's a sign of special respect and trust toward Russia, our specialists. When we talk about pandas, we can never help but smile. With huge respect and gratitude, we accept this gift. Thank you very much".

The Russian president confirmed that he intends to visit them at the Moscow Zoo. He'll go there with his Chinese friend, of course.