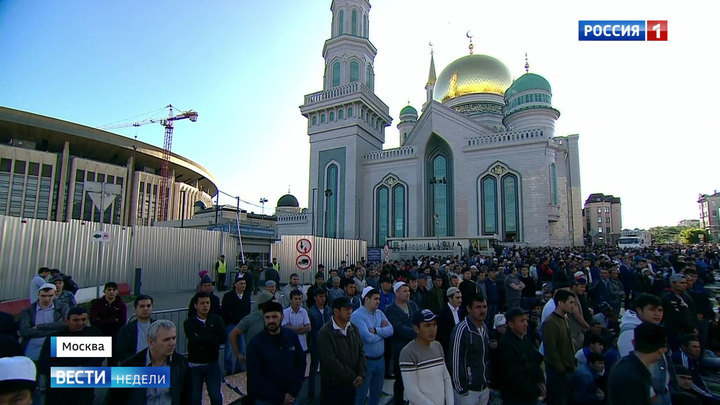 This Tuesday, the Muslims of Russia celebrated one of their most beloved holidays, Eid al-Fitr, the Festival of Breaking the Fast. During the holy month of Ramadan, believers observe strict fasting, don't eat or drink anything from dawn to dusk, pray fervently, and do good deeds. Al-Fitr is the end of the fast. President Putin congratulated millions of Russian Muslims on the holiday.

On the night of June 4th, in all the mosques in Russia, believers began to gather for a holiday namaz. In Moscow, the center of the celebrations was the Cathedral Mosque. The mosque couldn't accommodate all of those who wished to, and tens of thousands people said their prayers before the walls of the mosque.

In Tatarstan, Eid al-Fitr is an official holiday. In Kazan, as in Moscow, in the oldest Cathedral Mosque, there were so many people who wanted to pray that the worshipers filled the entire adjacent square.

In Kabardino-Balkaria, Eid al-Fitr is also an official holiday. The main celebratory service was held in Nalchik.

It's the day of breaking the fast in Karachay-Cherkessia. Everyone congratulated their relatives. They wished good health to the elders, gave presents to the young ones. The best dishes were laid on the tables. According to tradition, in Cherkessk, tables are laid right near the mosques.

In the Chechen Republic, grain was given to the poor, according to a century-old tradition. After all, the holiday should come to every house. Chechen children also got their gifts.