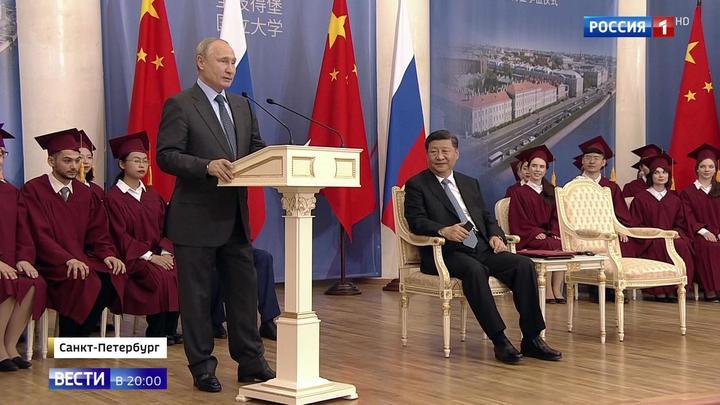 Here is the news from St. Petersburg again. At the Saint Petersburg State University, an official ceremony is being held, with Vladimir Putin participating. They're awarding an Honorary Doctor's Degree to Chinese President, Xi Jinping.

My colleague Alexey Petrov is working in St. Petersburg. He's now live with us.

- Hello, Alexey. We expect to learn the details from you.

- Hello, Ernest. The Russian-Chinese negotiations at the highest level moved to St. Petersburg from Moscow. The Honorary Doctor's Degree was presented to Xi Jinping just a few minutes ago.

Xi Jinping, President of the PRC: "In China, we say that if one studies alone, without friends, one's outlook will be limited and knowledge will be little. I hope that both parties will constantly intensify contacts and cooperation in the area of education."

The ceremony is symbolic in some way. Let me remind you, that at the end of April, Vladimir Putin was awarded an Honorary Doctor's Degree at Tsinghua University, a well-known Chinese university. Xi Jinping is its alumnus. Now, Xi Jinping is awarded the Honorary Doctor's Degree at St. Petersburg State University, the Alma mater of Vladimir Putin. Of course, the Russian President also took the floor and noted the role of Xi Jinping, his manner of work, the quality of his work. Let's listen to what the President said.

Vladimir Putin: "I've been acquainted with the new Doctor of St. Petersburg University for many years. I can assure the research board, the academic board of the university, the entire university that you didn't make the wrong decision because I know how President Xi Jinping has been working for many years. Without any artifice, I can tell you that he's really a theorist in political studies. He's a scientist indeed. It's applicable to not only the bilateral relations but the global issues as well".

In addition to that, Vladimir Putin stressed that the development of academic ties between the two countries is also one of the key priorities.

- Thank you, Alexey. This was our observer Alexey Petrov live with our studio from St. Petersburg.