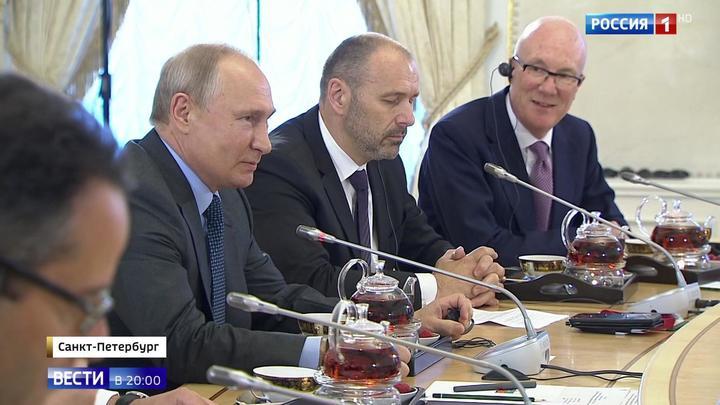 We're beginning with St. Petersburg where the International Economic Forum has opened today. For the 23rd time, it's gathered world's leading experts, businessmen, and politicians. Vladimir Putin also arrived in St. Petersburg. He met with investors and foreign leaders, who attended the forum. But the first thing on the president's schedule was his traditional talk with the representatives of the world media. Putin received questions about global issues and Russia's relations with the US, about Venezuela and Iran, as well as other pressing issues on the global agenda.

Denis Davydov with the details on Putin's responses.

The International Economic Forum in St. Petersburg is always partially about politics. How could it not be? Presidents, prime ministers, and ministers from all across the world have been coming to Russia. It's no surprise that the media interest is colossal. About 2000 journalists have been registered. According to the tradition, the host, the president of Russia, invites editors-in-chief of world's leading media agencies to his press conference at the Konstantinovsky Palace.

It's a rare opportunity for oppositely inclined media representatives to meet and talk with each other. Here's the head of the US Associated Press having a nice little talk with the head of Iran's main news agency. Meanwhile, Washington is threatening Tehran to use force.

Our world is becoming an increasingly conflicted place. "Why isn't our planets getting safer", sounds the first question to Putin.

Vladimir Putin: "If we look around at the murals, here and up there, there is war everywhere. Unfortunately, that's always been the case. It is true that all conflicts were followed by periods of peace. But it would be better to avoid conflicts altogether. Let’s recall Winston Churchill, who first hated the Soviet Union, then, called Stalin a great revolutionary when they had to fight the Nazis, and then, after the Americans developed nuclear weapons, he practically called for the Soviet Union to be destroyed. But as soon as the Soviet Union acquired nuclear weapons, Churchill initiated the coexistence of the two system concept. I do not think he was such an opportunist, but he worked with reality. He accepted reality. A clever man. We should just keep in mind what kind of world we live in, what threats and dangers might await us. If we do not keep this "fiery serpent" under control, if we let it out of the bottle, God forbid, this could lead to a global catastrophe".

Humanity learned a lot from the Cold War period when the nuclear powers were on the verge. Moscow and Washington signed a series of agreements allowing to restrict the arms race and decrease the global tensions. But now, these essential documents are being torn to shreds one by one.

Vladimir Putin: “Our US partners upped and withdrew from the ABM Treaty. So, ladies and gentlemen, I want to ask you: Did any one of you protest against that? Took tо the streets with banners? Nope. Silence. As if this is the way it’s supposed to be. Incidentally, this was the first step towards a fundamental destabilization of the global security framework, and a major step at that. Now, we are talking about our American partners terminating, their INF Treaty membership, also unilaterally. In the first case, they at least acted honestly and withdrew from the treaty unilaterally. However, in the second, apparently fully aware that they will bear responsibility for it, they try to blame Russia. Renewing the START-3 Treaty is on our agenda. Well, we can choose not to. Our latest systems guarantee Russia's security for a fairly long period into the future. The treaty expires in 2021. Mind you, there will be no more instruments to limit the arms race. It means that we'll basically have to live with nuclear missiles hanging above our heads. Permanently!”

Nuclear weapons don't only threaten nuclear powers. They might become a threat to the entire mankind. Resolving security issues requires team effort, says Vladimir Putin. Naturally, those who possess deadly weapons realize the responsibility to the world. No wonder that in Putin's rare conversations with Trump they always discuss the future of the treaties.

Vladimir Putin: “The most recent conversation I had with President Trump, I must say, inspires certain optimism, because Donald told me that he, too, was concerned about this. He is fully cognizant of the amount of arms-related expenses incurred by the US and other countries. This money could be used for other purposes. I completely agree with him. The US Secretary of State came here, we met in Sochi. He spoke along the same lines. If they think so, we should take some practical steps towards making a joint effort. I think that all nuclear countries should be involved. We need to create a broad platform for discussion and decision-making. In this sense, of course, this could be the light at the end of the tunnel.”

The meeting with media representatives was the first on Putin's schedule for the St.Petersburg forum. This year's motto is "establishing stable development." Vladimir Putin tells the journalists about the national projects launched in Russia. Moscow expects foreign investors to take part in them despite the fact that last year Russia witnessed capital outflow.

Vladimir Putin: "We saw significant, though not the biggest in Russia's contemporary history, capital flight of sixty-six billion, I think. Yet, the trade surplus is 131 billion. It more than covers the flight. And that disinvested capital is coming back. I met with businessmen from the UK, Germany, France, and Italy recently. I will have many meetings here. Why am I telling you this? We try to hear them, listen to them and respond appropriately to changes in their working conditions here. We also expect our potential partners to continue to energetically work in this country".

According to independent global estimates, Russia has risen from the 120th to the 31st position in the business ranking over the last few years. Many of Putin's guests are familiar with this spirit of competition, those journalists are sports fans. The executive editor of the Bloomberg agency is also a boxer.

- Muay Thai, I believe, has taught me to confront and control fear. But I don’t believe I'd dare to get in the ring with you.

Vladimir Putin: “I would not enter the ring with you myself. Not because you're a lady, but because everyone should paddle one's own canoe. I have never boxed. I can meet you on tatami for some sparring, but there I'd have a solid advantage, I assure you.”

The executive editor parries the blow, asking Putin about the oil, which she believes to be crucial for the Russian economy. The journalist of an economic magazine wonders, if Moscow will ramp up the extraction of carbohydrates, which has a direct impact on barrel prices.

Vladimir Putin: "Our manufacturing sector is not interested in oil prices climbing too high. The average price of $60-$65 per barrel suits us. We do not need to drive it higher".

During the 3-hour conversation, foreign presidents began arriving at the palace to have a bilateral meeting with their Russian counterpart. President of Bulgaria Rumen Radev, the noble general who used to be a military pilot flying MiG-29 fighter jets until recently. After being elected, he immediately announced the restoration of the relations with Russia. He began with increased trade engagement. The 3% commodity turnover increase isn't much but it's something.

Vladimir Putin: "We could have achieved much more, of course, but the good part is that relations at the government and parliament levels have now become more active and the intergovernmental commission has resumed its work. All this is a good enough reason to believe that we are using untapped opportunities to step up our relations across almost all areas".

Rumen Radev: "We also maintain a long-time partnership in gas deliveries and transit. I'd like to tell you in detail how Bulgaria continues to modernize and expand its gas transportation system".

Bulgaria seems to regret the fact that the previous president succumbed to the pressure of the EU and refused to let Russia build a pipeline on its territory.

Cooperation in the field of energy was also brought up in Putin's conversation with the PM of Slovakia. The Russian leaders also met with the Armenian prime minister. Nikol Pashinyan also attended the forum in St. Petersburg.

On the first day of the forum, Vladimir Putin met with its key protagonists, the businessmen. There were 40 people at the table: heads of funds and planet's top investors. They work with the Russian Direct Investment Fund. It's already attracted more than 1.5 trillion rubles ($23 billion). At the meeting, the president shared some first-hand information: Russia is a promising investment platform.

Vladimir Putin: "A series of companies and investment funds, in cooperation with the RDIF, have allocated funds for the development of medical centers, the construction of the key transportation routes, and so on. These projects have been precisely calculated and accurately structured. The government, society, and investors will all benefit from it".

Kirill Dmitriev, CEO of RDIF: "Many investors are fond of the RDIF model of investing state funds at a profit instead of just spending them. For each ruble spent we get nine from our partners. We also help our companies to access foreign markets".

This year's forum has a lot of participants, more than 17,000. There's hope that the number of contracts signed at the forum will also break the record.