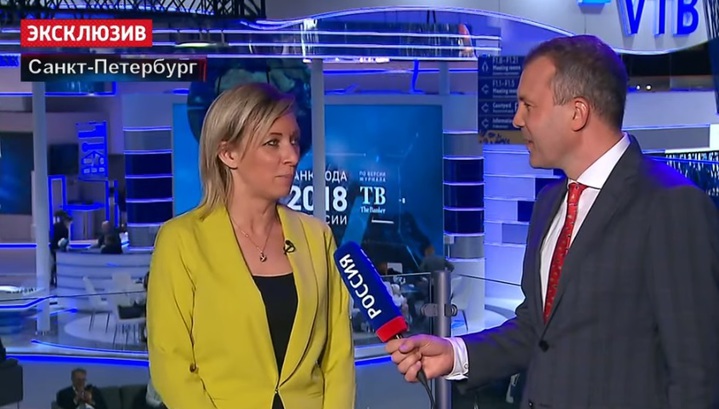 - We continue our special. While the global economy is being discussed in St. Petersburg, the Ukrainian parliament is in discord and chaos. The Ukrainian senators weren't ready for the idea to stop shooting people and lift the blockade of Donbas. It took three tries to get an adequate vote on the initiative, though negative. At one point, they were going to vote for the fourth time. It's all fun and games there. Let's check it.

After that, Maria Zakharova from St. Petersburg will tell us what the ultimate state of the Russian-Ukrainian relations will be.

Oleg Lyashko, Radical Party: "I remember some of you used to call Zelensky a cat in a bag before the elections. I'll tell you more, he's not a cat in a bag, he's a jack in a box".

Maxim Burbak, People's Front: "How can the Defense Minister of a warring country offer his resignation? We're fighting the aggressor state, Russia. Does that make sense to you or not?"

Andrey Paruby: "I see complete futility of further initiatives. The president submits bills but the Rada's the one making decisions".

Oleg Lyashko, Radical Party: "Chaos, anarchy, and disorder among the Ukrainian troops, in our army, and in our country. Zelensky will go down in the history of Ukraine as the president of chaos and empty fridges".

Irina Gerashchenko, Deputy Speaker: "We hope that Zelensky finds words of gratitude for the Defense Minister, who, among other things, was protecting the right of the Kvartal 95 to perform in the peaceful cities of Ukraine".

Oleg Barna, senator: "We must remember that the matters of national security defense, and the protection of national interests are far more complicated than playing the piano, even if you don't play with your hands".

- We're here with Maria Zakharova, Director of the Information and Press Department of the Foreign Ministry. Maria, before talking about geopolitics, I can't help but ask: What was that all about when a lot of journalists couldn't find you today?

Maria Zakharova, Spokesperson of Foreign Ministry: That's something surreal. I was at the panel discussion and kept getting messages that everybody was looking for me, including through media agencies. I had to take a selfie and tell them that I'm doing just fine and that they could find me in the D2 room. That's what happened. We're living in an information environment…

- Unlike what's happening in Ukraine, we've just seen that…

- Sergey Lavrov shared breaking news regarding his conversation with Kerry and that Kerry has seemingly recognized Crimea as Russian but didn't like the referendum itself. Is it the same with Pompeo? Or is his case more difficult?

- In his interview, Sergey Lavrov made one thing clear. He said it in advance that it was beyond diplomatic procedures to share what happens behind closed doors during private talks. But John Kerry untied our hands in a sense after he published some memories where he recited everything not the way it was but the way he saw it. That's why now, we have a right to tell the world what really happened. In reality, it all happened the way Sergey Lavrov said. I was there during that conversation.

Throughout the conversation, John Kerry repeatedly said: "We all know Crimea's yours, we all know that Crimea will be Russian forever, that's the reality".

As Sergey Lavrov already said in his interview, the Americans needed to save face in that situation, needed to come up with a way to do that. But the fact that they repeatedly... Moreover, they were constantly saying that Crimea will always be Russian and that they were aware that it was the undeniable reality, no use arguing with that. That's a fact. Once again, if the US hadn't begun revealing the details of our negotiations, perhaps we would have adhered to the diplomatic politesse. But now, we have our hands untied.

- We need Pompeo to write a book containing classified information so you could publish your conversations with him as well.

- Maria, could you describe the current state of the cooperations of the foreign ministries of Russia and Ukraine? They have a new president. Can we begin feeling cautiously optimistic? Do you feel it already?

- Thanks a lot, Olga. If it wasn't for you, we'd never discover what's happening in Ukraine, thank you for telling us. In fact, there's some truth to this joke because our contacts with the Ukrainian Foreign Ministry have been basically reduced to a minimum. It was all done by the previous regime of Poroshenko, who went against the interests of his own people, terminating Ukraine's agreements with Russia one after the other. At the same time, we've discovered that the commodity turnover between our countries has only grown. His regime was doing everything to make the lives of his own people more miserable. Once again, we don't really maintain contact, if it's adequate contact we're speaking about. Right now, there's a major discussion at the Rada. There might be something I don't understand. Perhaps somebody could explain this to me. But today, I was surprised and shocked by the way the Rada refused to accept the resignation of the former minister. I don't know what to call him, resigned... incumbent... resigning Minister Klimkin. A person wants to quit but the Rada tells him, "No, you should stay." That's nonsense, a paradox. But that's the real Ukraine for you. It's unclear what happens next.

- That's why we asked you, we wanted…

- You know what? Some people tell us not to discuss Ukraine because that's none of our business. I'd like to remind you that Ukraine is our partner, like it or not, on a series of matters we're forced to discuss. But now I wonder who do we discuss those matters with? How can we find out if he's still the minster? And the second thing, the inter-Ukrainian crisis, which is purely internal, has become a subject of international relations. It's discussed in the EU. It's the reason a series of states and international organizations are adopting sanctions. How can we not discuss that? We'd like to know who's now in charge of settling this matter, including in the international arena.

- Klimkin is formally responsible, that's the reason we asked. President Putin said that he won't talk to the head of the Ukrainian state as long as it's Poroshenko. Now, an opportunity window's appeared, if we look at the formal aspect. But Klimkin hasn't changed, he's the same Klimkin. So in terms of foreign ministry communication…

- You see, I find the situation to be tragicomic. It's comical because of what we've just seen and talked about. It's tragic because the person who was running for president and has now been elected said that he'd tackle the crisis as soon as possible and use all available opportunities. Time is running out. Time's working against the current administration. However, I believe it needs time. It must take shape. It must outline its priorities and its vision of the way to resolve the crisis. I believe that if we define the process that's going on in Ukraine, I believe we're witnessing the transit from election promises to the comprehension of power. They haven't yet begun working on the ways to approach the situation. It's very early. The new president and the people who came with him are merely attempting to comprehend what power is, what power in Ukraine is, that's a different thing, as well as how and where to move in this situation.

- Yesterday, Minsk hosted the meeting everybody was so optimistic about. Lavrov mentioned that so far, there's no need to meet in the Normandy format. What will it take to finally meet and talk? Do they need some official statement? What will it take to make that happen?

- That's obvious, I believe. The Ukrainian government must appoint officials... I'm sorry for saying "must appoint." It's not like I'm telling the Ukrainian government what to do. I'm not. But I mean that both in theory and in practice, it's supposed to happen. The officials responsible for the key policies of the executive branch must finally begin doing their job. When they begin doing their job, when they get appointed negotiators, when they're able to guide those negotiators, then, it'll be clear who we need to talk to. Who do we talk to now, when the foreign minister of the state submits his resignation but the Rada doesn't let him leave? What shall we do? How do we maintain a dialogue? Is that even a dialogue or a multilateral conversation?

- Yesterday, after the meeting of the contact group, the representatives of the republics said that they were cautiously optimistic after talking to the new authorities. But you don't seem to be optimistic at all.

- No-no, you see, so many times have the statements of Kiev inspired false optimism in us that this time, we'll only judge by their actions. After seeing their actions, we can be either optimistic or pessimistic. They haven't done anything yet. Right now, unfortunately, as it always happens, the situation's been reduced to a bazaar-level. It's like a virtual Maidan square. After all, the statements and election promises of the current president, made everyone, the entire international community, believe that the rhetoric and attitude would change. The issues mentioned by Zelensky were clear and obvious to him, as far as we understand. But in order to begin tackling them he needs to appoint the ones in charge of the task. Right now, his team, the administration, the executive branch is taking shape. I believe that these will be their primary tasks when they're done with self-identification. Then, it'll be clear in what direction to move.

- Thank you so much. Spokesperson of the Foreign Ministry Maria Zakharova was with us live from St. Petersburg.