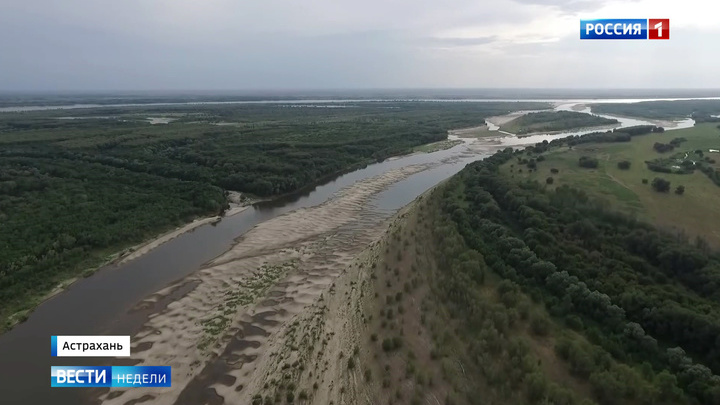 Earlier in May, the residents of Kazan, Ulyanovsk, Samara, Nizhny Novgorod, and other cities built on the Volga River sounded the alarm. Russia's most important river has become shallow. Humans switched the Volga to manual control long ago with the help of a cascade of nine hydroelectric power plants.

So what exactly happened? And how fatal is the situation? Olga Armyakova with the details.

There's no time or boundaries here, everything's in her power. The great inconceivable Volga River. It's one of the largest rivers on Earth and the longest one in Europe. It's also the most beautiful one. One can't help but marvel at it, as if one could see the entire depth of the Russian soul in its waves. However, the Volga itself is losing its depth. The mighty, resonant, ever-swirling river suddenly became quiet in the middle of May. The water receded, revealing hundreds of meters of the riverbed. Marvelous, unthinkable landscapes that rather look like a desert. The emerald canvas of the Volga is now covered in sandy islands.

"We used to catch fish here. Now, there's only mud here. It's painful to look at, you know".

The same horrifying picture occurred in several regions where the great Russian river lost its shores, as well as its major feeders, such as the Kama, the Kazanka, and the Sviyaga. Gorodets is no longer on the Volga, it's a town astrand.

"We used to swim here, we even had a beach. It used to be beautiful. Now, it's gone shallow".

That's not the way it used to be. The merchant town of Gorodets, almost as old as Moscow, always had the Volga as its main source of income. The main local legends are about fish riches.

"It's an archive photo of Gorodets in the early 20th century. It shows us how much water the Volga had back then. Old-timers still remember that in spring, people used to catch backwater fish with baskets. They used to catch sterlet here. Their baskets were filled with it like a bus at rush hour".

This spring, Gorodets was dreaming about a flood like that but it never came. Of all springs, this time, the weather was hot and dry. There were no rains. One can't fish in a knee-high river.

Sergey Volkov, fisherman: "The people are desperate. Mother Volga used to feed us. Now, there's no fish in the Volga, it doesn't go here. Too little water".

This river section next to the tiny Gorodets was already called a bottleneck.

"I can count all of the shelves like fingers on my hand. Yeah".

The narrow channel is a transport route that divides the main water artery of Russia into two parts, the north and the south. But even in its best years, it used to have a four-meter-deep waterway. Now, it's no more than two. In order to sail through this complex area cargo ships and tankers have to wait weeks for their turn. The water level in the area is raised artificially by water discharges from a hydroelectric power plant in Nizhny Novgorod. However, there's no extra water now.

Alexander Lisin, professor: "The modern economy and production revolve around the just-in-time approach. It's something that works predictably, accurately, according to the schedule, if I may. What is now happening to the water level of the Volga is an illustrative example of the fact that the development of river transport is a kind of hostage of whether there's water or not".

The Kuybyshev reservoir was the first hostage of the water, or rather, its absence. It's the largest Volga reservoir, which people call the Sea of Zhigulyov. It appeared there after the construction of the Zhigulyovskaya hydroelectric power plant. That was a pan-Soviet project at a dashing speed. In August 1958, Khrushchev himself cut the red ribbon and solemnly launched the world's largest hydroelectric power plant.

Since then, the Volga's been controlled manually. It's not a river in a conventional sense but an entire complex of controlled hydro-nodes and reservoirs.

Dmitry Ivanov, ecologist: "Today, there are several similar hydroelectric plants on the Volga and Kama. They all perform their functions. The thing is, every region is interested in having water".

By the middle of May, the water level in the Kuybyshev reservoir sank to the 50-meter (164 feet)mark instead of the planned 53 (175 feet). An ancient road was discovered on the shores of Kazan. It used to be covered by water. This cobblestone road was laid in the 19th century. It used to connect the marina to the city's downtown.

But there's something that wasn't affected by the low water level. I'm talking about passenger water traffic. Despite all odds, the navigation was launched in time. Fast tourist ships began cruising along the river.

However, some cruise routes had to be temporarily canceled. Passenger ships couldn't dock in Bolgar and Sviyazhsk. By the end of May, voyages down the Volga river resumed. The water's been coming back.

Sergey Zakharov, hydro-meteorologist: "The forecast made by the Weather Service proved to be 100% true. That's why all those talks about meteorologists making incorrect forecasts and the abundance of snow that made it go down into the soil, are complete nonsense".

This spring was indeed quite dry, 30% below average, which was confirmed by the Weather Service's forecasts. However, the numbers aren't catastrophic.

Dmitry Kobylkin, Minister of Natural Resources: "Many regions are concerned about the water level, many wonder why it's like that. But we must all understand that there are local reservoirs that regulate the water level. And we'll do everything we can to preserve the ecosystem".

In order to preserve the ecosystem, the water level is regulated manually by a special interagency commission, which decides how much water to discharge and how much to save.

Calm and quiet — a wonderful sight. This ideal picture is actually an exception because it's supposed to be noisy in here in this time of the year. The water discharge dam of the Zhigulyovskaya plant that discharges extra water. However, all of the pipes are shut now, there's just nothing to discharge. The flood has never reached this place. While the dam is silent, the Volga is growing each day by about 10-15 centimeters (4-6 inches).

Oleg Leonov, CEO of the Zhigulyovskaya Hydroelectric Power Plant: "The water level in the Kuybyshev reservoir is slowly rising. Right now it's at 51.91 meters (170.26 feet). That's two meters higher than the lowest level that we had after completing the maximum discharge cycle".

The maximum discharge saved the lower Volga from drought. However, there's still not enough water for the fishermen of Astrakhan.

"Two to three fish in half a day, that's not much. We used to catch at least ten".

"The fish come to the spawning grounds. But now, there's no water. The fish stayed where the eggs were laid because the water's down".

"There are eggs on the grass. No hatchlings will be born from them, they won't have time to develop".

The ecological situation is further complicated by the fact that the Volga's ability to clean itself has decreased ten-fold over the past 50 years. Industrial and domestic waste contamination altered the usual motion of the waters. Previously, prior to the construction of the dams, it took 50 days (30 during the flood) for water to move from Rybinsk to Volgograd. Now, the journey from the north to the south takes almost 500 days. The main river of our country, our national treasure, needs to be cleaned and cured. Without the Volga, there would be no Russia.