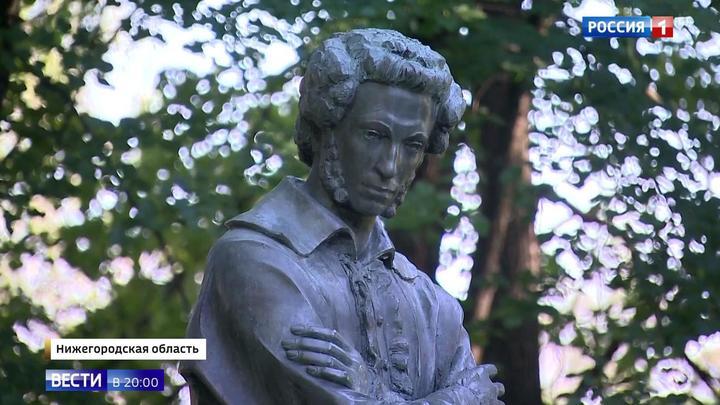 In Russia and all over the world, today is the Day of the Russian Language. It coincides with one of the most important dates in the history of Russian literature. 220 years ago, Alexander Sergeevich Pushkin was born. Celebrations are held not only in Russia. Ambassador of Russia to the U.S.

Anatoly Antonov paid floral tributes to the poet's monument in the U.S. The monument is located near the White House, on the George Washington University campus. In a school in Damascus where a lot of Russian-speaking children study, they installed a bust of Pushkin today. The school's library received books by the poet.

Poems by the poet were also recited today in Kazakhstan. They held an unusual flashmob there. Dozens of Alexander Sergeeviches took to the streets. The classic's lookalikes told the passers-by about his works and gave gifts.

Of course, one of the main celebrations was held in Pushkin's family estate in Boldino. Here's Leonid Muravyov reporting from there.

Pushkin liked Boldino for the opportunity to seclude himself there from everyone and stay alone with himself. Every visitor of the museum and reserve has this opportunity. For example, one can walk along alleys in the shade of centuries-old trees, which still remember the poet. How wonderfully birds sing here. But once a year, it's noisy and merry here because the birthday of the great Russian classic is always celebrated with a bang.

Pushkin would like this jubilee for sure. They meet guests in Bolshoe Boldino with dances and songs. There are treats on the tables. Hot tea from a samovar is popular even when it's 95 °F outside.

Maria Mokhnacheva, employee of the A. Pushkin museum Boldino: "We have herb-infused tea from samovars. We treat our guests with pies from the Russian stove".

On the 220th anniversary of the poet's birth, the park is filled with bright colors. We can see a volume of Eugene Onegin. Here, the poet finished his novel in verse. They show rough copies to the visitors. Sometimes, they're as big as a quarter of a copybook sheet. They're full of small letters. Pushkin had a severe shortage of paper in Boldino. But he couldn't give up his habit: he drew on the margins when he thought.

Maria Matveeva, academic secretary of the A. Pushkin museum Boldino: "We can see some of those drawings on the table. This is a scene from the Coffin Maker, one of the Belkin's Tales".

The interior of the poet's den, a corner room and therefore the lightest room in the mansion, was restored in accordance with one of the poet's drawings. Now, everything looks as if the host has just gone for a walk.

Lyubov Klokova, student: "Enough; get up. I must frankly explain myself to you. Onegin, do you recollect that hour when in the garden, in the avenue, fate brought us together".

Everyone could check his knowledge of the great poet's work today. The Pushkin Dictation was held in Russia and far beyond it. Abstracts from the most well-known works were read out for participants in Boldino as well.

The black top hat is the most popular hat among the visitors of the museum. Along with whiskers, it's a kind of the poet's identity. But Pushkin never wore it in Boldino. It's still a formal attire. He came here three times, and each of them was for business. His first visit in the autumn of 1830 was the longest and fruitful one. He couldn't return to Moscow because of a cholera outbreak, so being far from his bride and friends, he wrote a lot. He confessed that he'd never written so much before.

Celebrations will be held in Boldino until the end of June. People come to the museum and reserve from different parts of Russia. Some come for inspiration, and others — for the fulfillment of their dreams.

Vyacheslav Vershinin: "We've caught a crucian carp so far. But we still hope to catch a goldfish. After all, it's a magic place".