Top Expert: US Foreign Policy Makes No Sense Because America is LOST! No Moral Compass Left! 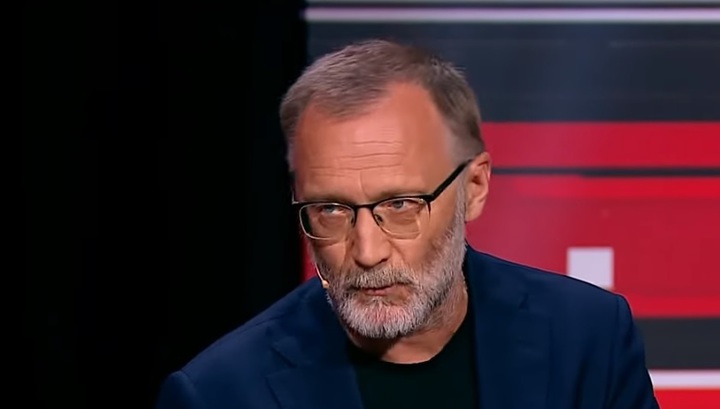 Sergey Mikheev, political analyst: They got caught up in that concept and confused everyone else. They discredited it by applying it here and there in the way they like. Speaking of human rights, there's the main Rubicon. This is the faith in God. A person believing in God interprets human rights in one way. Those who don't believe interpret them in a different way. The religious teachings, at least three of them with the same roots, — Judaism, Christianity, and Islam — unambiguously interpret the majority of the things provoking arguments now. The things going beyond those three world religions often provoke arguments. The things beyond those limits that were condemned in those religions and people believe that it was right to condemn it because it destroys a human. These things begin to provoke the most heated arguments because the right to life doesn't raise questions. The things that are historically considered to be a crime in religious traditions raise questions. This crime is based, among other things, on the understanding of whether a human has a soul or not. If a person doesn't have a soul…

If a person doesn't have a soul, he has one set of rights. And if a person has a soul, he has a different set of rights. Take abortions, for example. I'll explain why religious people are against abortions. It's because, in the religious tradition, it's considered, and I think that it's true, that a soul is vested in a human at the moment of conception but not in a month, two or three months, or after the delivery because otherwise, you say that when a human already looks like a human, he has rights. And when he doesn't look like one, although it's the same, he doesn't have rights.

I didn't interrupt you. Does it offend you a lot? It's typical.

In this case, if we follow this logic that this is a human and that isn't a human yet, one may kill newly born children. He's born, and you think that he isn't a human, that he doesn't have rights, that he isn't a human yet. He can't read and write so far and isn't responsible for himself. He can't sign any documents. Is he a human if he doesn't have a soul? This is a question. By the way, some dictatorial and misanthropic regimes used these things and killed children and people. It's because of this attitude toward people. If one doesn't have a soul, he's just a slab of meat. He's a slab of meat, you, I, and everyone else are. Therefore, in principle, if one can kill him in a womb, one can kill outside of it. One can kill. One can kill. No, the logic isn't weird at all because in fact, wait, the logic of a non-religious person is fully based on what we now appeal to — laws, jurisprudence — and laws can be interpreted in various ways.

On laws and economy, focusing on legal conflicts and economic benefit, the entire modern world is actually based. And in this concept, those who can legally be responsible for themselves and earn one's living or make a profit are humans. Everything else is actually under question. By the way, it gave Hitler the right to consider part of people under-men. Under-men. The law protects the weak and helpless.

I've heard what you said.

Laws can be different. One can make any laws. It may protect and may not. The same is true for the so-called minorities.

- As a rule, laws protect ownership.

- By the way, look at what liberal democracy talks about. What's above other things? Human life? No. Rights? No. Ownership. The right of ownership is the thing that is to be protected first of all. In principle, it already puts a human at the level of inanimate things. So, the main margin lies here. And this is a problem of the modern world because if you omit that religious component, you get in an area where everything is relative, where all of the margins merge, everything is unstable. Today, there's one thing, tomorrow, another thing occurred to us. Now, there's one number of homosexual people. Tomorrow, the number is different. It means that they have the right to impose what they view as human rights. This is the main problem.

As to minorities, I can say that even in the U.S., everyone is fed up with them. They pissed off everyone with imposing of their unhealthy lifestyle. They pissed everyone with trying to persuade everyone that they're on the edge of progress, that they're unusually developed and advanced. Although in fact, their entire philosophy is based in one place. And everyone knows where it is. They aren't advanced at all, you see. The fact that they have special creative skills is a lie. It's simply a lie. It's distortion. They pissed everyone off with this, the talks that they're in some special advanced group of progressive humanity. That's why sooner or later, a reaction to their super activity was to begin. Unfortunately, this reaction will be not very cultured in the U.S. as well. It's because they pissed off the people who let them promote their views once. In fact, they don't largely believe in the sacred things either. This is the problem of the modern democratic world, you see? Destroying religious concepts, basing the modern life on fighting against God, basing the modern life on it…

- There was the biggest group marriage.

- Those were the first decrees that legalized homosexuality and abortions in the world. Abortions then became, he restored that article. Khrushchev let the things with homos remain as they were and legalized abortions again. I don't understand what you don't like.

- Homos is an abbreviation from homosexuality.

- Why does it offend you?

- I don't understand the word "gay". What is it about?

- There isn't this word in a dictionary.

- If you open a dictionary, in old English, it stood for "chewy gay fellow". It meant just a merry person. Now, of that merry person…

- I'm against slang and a low style on a good program. This is what I'm against.

- Wait, I should note that Sergey Alexandrovich hasn't gone beyond the limits of the Russian language and even less the limits that the modern works of fiction go beyond. So, we behave…

- We'll have a short break now. By the way, I wonder how they treat human rights? For example, I've always wanted to be a 6.5 feet tall, slim blonde. Are my rights violated or not?

- It should be clarified and cleaned from everything redundant. I wish we understood. I think that Sergey Alexandrovich talked about simple things. Does it ultimately lead a human to progress or regress?

- But these are conditional assessments.

- If you view them as conditional, human rights are ruined.

- Those who were against giving the right to vote to women said that it destroys traditional values and a traditional family.

Sergey Mikheev: And they destroyed the values and the family. I think that they did.

- You see how different the points of view we have.

- Moreover, I think that democracy is a fake.

- Democracy is a fake In this fake, people live longer, have higher living standards…

Sergey Mikheev: Is there democracy in Libya now?

- But the living standards became worse.

- Americans think that there's a democracy.

- Wait, is there democracy in Arabia Saudi or the UAE?

- But what are living standards there?

- Everything depends on the prices of oil. As soon as the price of oil is about $20-30 for a few months, Arabia Saudi and other Gulf countries realize that they're running out of money at once. So, there's no stability.

- Wait, wait. Nevertheless, their living standards are good even when oil costs little and for a long time because there's a certain ratio per person.

- Is there democracy in Ukraine? Did they begin to live better?

Sergey Mikheev: If it's against Russia, then yes.

- There was a vote, then the dictatorship of Hitler was established.

Sergey Mikheev: In 1933. It happened right after he came to power.- Really? Don't tell tales.

- He held the new elections to the Reichstag, lost them, and then abolished elections. In the 30s, Europe gave up democracy. There were Austrian fascism, Mussolini. There were dictators in the Baltic states.

- Wait, was Mussolini a dictator?

- Mussolini was a dictator.

- Then, how did they remove him from power?

- They did it by military means in WWII.

- After that, he executed those who helped the king declare that.

- It wasn't he who executed them. It was at the times of the Republic of Salò and the violence of Germans. It isn't about Mussolini at all. Therefore, Mussolini…

- I'll still let myself read this out from European explanations what human rights are. Ultimately, the requirement to respect human rights has a moral nature and is based on moral values. And here, everything ends.

- Everything ends here, even in our studio, you see?

- But morality is a religious notion.

- This is the thing. This is what Sergey talked about, you see?

Sergey Mikheev: In my personal opinion, I'll insist on my views. And they're simple because everything is said and written. I'm not against human rights. I even admit that they're universal. I'm talking about only one thing. I'm guided by a well-known thesis that you shall not make an idol for yourself. One shouldn't make a quasi-religion of it. And this is what the Western world is doing now. It's making a new religious temple without God of it. This is what it's doing. Therefore there's a loose adaptation, therefore they sacralize things that aren't sacred, therefore there's a confusion, therefore there are discussions of what democracy is. What we define as a democracy is a democracy and that isn't, and so on. Humanity got caught in that. Human rights have their place. There's no doubt that they're universal. Everything set forth in the UN documents is true. But one shouldn't make some quasi-temple of it, you see, and give it meanings that it doesn't really have because at that moment, one begins to confuse oneself and everyone else, being caught up in those terms. Most importantly, one shouldn't impose by force and thus excuse the violation of the same human rights.