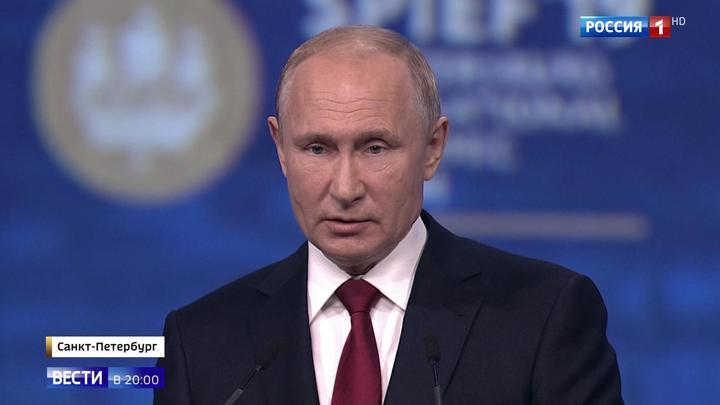 The current model of the global economy is in crisis despite its growth. The main reason for it is that the principles of globalization established in the late 20th century are less in line with the new reality. This is one of the points of Vladimir Putin's speech at a plenary session of the St. Petersburg International Economic Forum. Today, the President talked about how we can oppose the sanctions and trade wars which Western countries use to attempt to restrain competitors. At the same time, the economy wasn't the only thing on the agenda. Purely political issues were also discussed.

The indicators seem to grow but the engine of the global economy appears to idle. The Russian president warned that the current model is fragile.

Vladimir Putin: “We all should frankly admit that, despite this growth, the existing model of international economic relations is still in crisis, unfortunately, and this crisis has a comprehensive nature. Problems in this area have been piling up over the past few decades.”

The crisis at the end of 2008 shook up the liberal-model-based global economy. They managed to stabilize the situation. But far more significant changes are necessary.

Vladimir Putin: “The previous patterns essentially put the Western countries, we should admit it, into an exclusive position, giving them an advantage and enormous revenues, and predetermining their leadership. Other countries simply had to follow in their wake. When their competitors became more developed, what emerged was a strong desire and determination to preserve one's domination at all costs. And the states that previously advocated the principles of free trade and honest and open competition began to talk in terms of trade wars and sanctions, blatant economic racketeering with arm-twisting, intimidation, and the removal of rivals by so-called non-market methods.”

Nord Stream 2 is a specific example of arm-twisting.

Vladimir Putin: "The project is designed to enhance energy security in Europe and create new jobs. It fully serves the national interests of all of the participants — both European and Russian. If it didn't serve these interests, we'd have never seen our European partners in it. Who could force them into this project? They came because they're interested in the implementation of this project. But this doesn't match the logic and serve the interests of those who, acting within the framework of the current universalistic model, became used to exclusiveness and anything-goes behavior. They are used to letting others pay their bills. Therefore, endless attempts to torpedo this project are made".

But sanctions now undermine not only the energy industry. The most advanced hi-tech markets are under threat. One of the biggest Chinese giants experienced this.

Vladimir Putin: “Take the situation with Huawei. They're trying not to simply challenge the company but to drive it out of the global market in an off-handed manner. Some circles already call this "the first technological war" to break out in the digital era.”

The tariff war and trade confrontation between China and the U.S. are one of the most discussed topics. The main question is how far it'll go.

Xi Jinping, President of China: "Maybe, I have the answer to this question in my notes. I have no idea. We're determined supporters of globalization in the world. At the same time, globalization is a double-edged sword. Some will benefit from it, others will suffer losses. But as we say, one shouldn't throw the fur coat into the fire if he notices a flea on it".

Vladimir Putin: “The Chinese have a good proverb. When tigers fight in a valley, a smart monkey sits and watches how it'll end. But everything changes. And this situation also changes. If everything goes on like it is now, everyone present here and your colleagues, dear ladies and gentlemen, will face huge problems, colossal losses. Private enterprises will suffer losses. Who will carry this burden? Our citizens.”

Not long ago, such a world filled with endless sanctions and trade wars seemed impossible.

Rumen Radev, President of Bulgaria: "Who could imagine 20 years ago that China will be the main advocate of the principles of free trade and the U.S. will impose protectionism? Who could have predicted that in Europe, which took decades to build a model of tolerance, under the pressure of migration, neo-fascist and nationalist movements would raise their heads?"

South Stream was a real test for the previous Bulgarian authorities. It's a big project which Sofia could make money on. But they refuse to build it because of pressure from Brussels.

Vladimir Putin: “Many people in Bulgaria regret that it wasn't implemented. To put in mildly, there are many such people. What did Bulgaria lose? It lost $3 billion of investments, thousands of new, well-paid jobs, and $400 million worth of income for gas transit per year. All of that. These are direct losses to the Bulgarian economy. And one can't but regret it. I think that it's also clear to everyone why it happened. Let's admit that there are certain shortcomings in the Western system of integration. It's connected with the limitation of sovereignty. We have an agreement with Turkey to build TurkStream. Thanks to the political will of President Erdogan, thanks to the fact that he showed his best qualities of a man's character and the country's sovereignty, we'll finish it in a few months.”

Russia has colossal plans. There are complex projects for the development of the Russian Far East, Arctic, and Eastern Siberia. They can attract trillions of rubles of investments. There is a demand for employees. The WorldSkills vocational skills world championship will be held in Kazan in August. There'll be competitions in the skills of the future.

Vladimir Putin: "We've created a whole platform called Russia – Land of Opportunity to encourage personal and professional growth. This human resources project is unprecedented in scale. In 2018 and 2019 alone, over 1.6 million people took part in it. We'll develop this system for sure".

The state intends to relax legislation to eliminate any pressure on business from law enforcement bodies. They'll launch a digital platform. Entrepreneurs will be able to report every illegal action. Against this background, they began to discuss the high-profile case of the Baring Vostok fund and its founder Michael Calvey.

Vladimir Putin: As we know, he's charged with embezzling 2.5 billion rubles. Some, including many of his Russian partners present here, argue that it isn't true. Maybe. But it's law enforcement bodies that should find this out. And we have a judicial system that is responsible for this. I expect that everything will be done in a transparent and understandable manner, with the participation of those defending the position of our American partner, and fair legal decisions will be made. For our part, my colleagues from the government and I will closely monitor it, of course. And the Prosecutor General, I see him here, Mr. Chaika will closely monitor it and control that process, too.

- Read the Bible. Don't steal, don't covet your neighbor's wife. There's everything in it. He's charged with stealing 2.5 billion. It has to be proven by law enforcement bodies, or they should drop the charges. That's it. What's special about it? Look at what's going on in other countries. Businessmen are sentenced to 100-150 years in prison in the U.S. And everyone is fine with that. Don't steal. Behave properly, and that's it. I reiterate that we'll monitor it very closely. And I'd like to say that there are universally recognized rules in jurisprudence. Unless there's a guilty verdict, everyone is considered to be innocent, including Mr. Calvey.