Kiselev: More Bluster! Trump Is a Loser; Deal-Making Master Unable to Deliver on Anything! 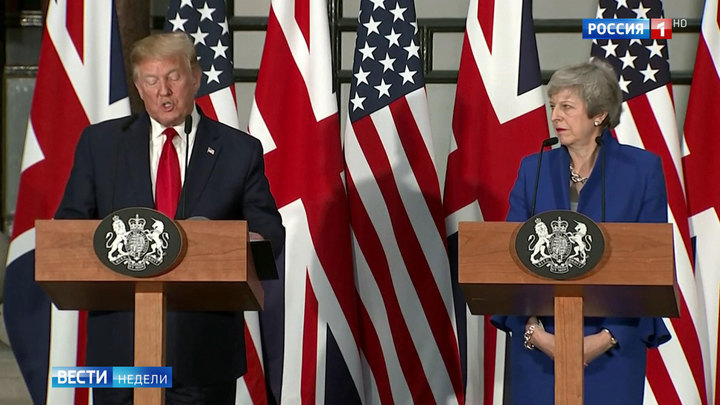 Last Tuesday, the US president began his British visit. Trump was at ease, feeling pretty confident about it. He said that Boris Johnson was the best candidate to replace Theresa May and called the Mayor of London a loser. In addition, he suggested that Britain refuse to pay the EU the agreed fifty-billion-dollar "divorce bill".

Our reporter Alexander Khabarov will share all the details of Trump's visit to Britain in a couple of minutes.

But first, let us share an observation. It's been almost three years since Trump was elected president, but it seems that the businessman in his head has failed to become a statesman. Trump is like a fish out of water when it comes to diplomatic formalities and tends to talk a big game about making deals. Well, of course. After all, he wrote an entire book titled The Art of the Deal.

But what results has the "deal master's" presidency shown? So far, there have been a lot of ruined deals, as Trump usually calls them. These include international deals, either in terms of climate, trade, or security, for example, the termination of the Russian-American INF Treaty, or the deal on the Iranian nuclear program. You'll find it funny, but Trump hasn't made and ratified a single successful deal, except perhaps the giant shipment of American weapons sold to Saudi Arabia. But that only confirms our observations. Trump's still doing business. He only talks about making deals but doesn't actually make them. He even promised a deal to the resigning Theresa May.

Donald Trump, President of USA: "As the UK makes preparations to exit the European Union, the US promises an amazing trade deal between the US and Great Britain".

In early May, Trump was promising China a deal. However, only the US was going to benefit from it.

"My respect and friendship with President Xi is unlimited but, as I have told him many times before, this must be a great deal for the United States or it just doesn't make any sense".

Trump even promises North Korea a deal. However, he hasn't made much progress and this doesn't exactly fill Kim Jong Un with enthusiasm.

In other words, he talks a lot about deals that he never actually makes. Meanwhile, all the existing deals are simply falling apart.