West No Longer Recognizes Eastern Front and the Sacrifice of the Russian People in WWII! 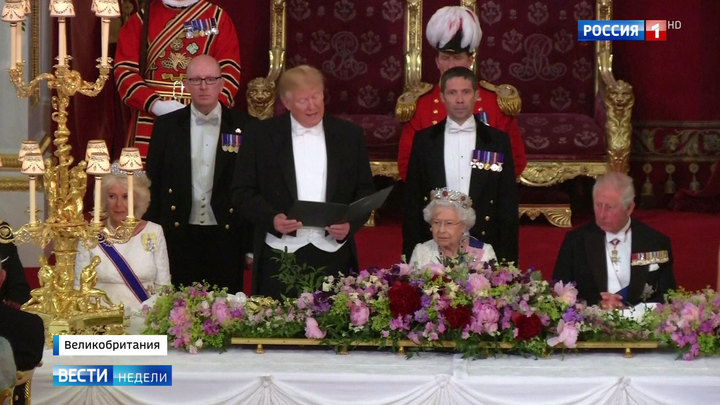 But forget Zelensky and his scale.

But we'll continue to speak about scale and proportions. In this view, it was interesting to see the leaders of the West, who gathered in Portsmouth on the occasion of the 75th anniversary of the opening of the Second Front near the end of World War II. Trump arrived in advance, timed to the date of his state visit to the UK.

In fact, "the Second Front" is our terminology. They don't call it that. They refer to it as the Normandy landings in June of 1944. That day, D-Day, 150,000 soldiers, mostly American, landed there. It was less than a year before the end of the war. However, we're going to discuss the circumstances of the operation later. Now the important thing is that the pivotal figure of all the ceremonies in the British Isles, and later in French Normandy, was US President Trump. He behaved, on the one hand, somewhat saucily, even allowing himself to stroke the Queen of England on her back, and, on the other, so pompously, as if doing everyone a favor.

Donald Trump: "This week, we commemorate the mighty endeavor of righteous nations and one of the greatest undertakings in all of history. 75 years ago, more than 150,000 Allied troops were preparing on this island to parachute into France, storm the beaches of Normandy, and win back our civilization".

Speaking about the endeavor of righteous nations, neither Trump nor anyone else mentioned the contribution of the Soviet Union to the defeat of fascist Germany. Not a single word. As if we weren't among the righteous nations. Since President Putin wasn't invited to join the Allies, the Eastern Front also was never mentioned. As if brave American soldiers saved the world. So, God bless America! And this is not a joke.

Emmanuel Macron: "Dear Donald Trump, the United States of America never shines brighter than when it is fighting for the freedom of others".

This is all about proportions. It is worth recalling that the Americans and the British, despite Stalin's requests, had repeatedly promised to open the Second Front, but they deceived many times, finding all sorts of excuses. Only after the turning point came on our front and it became clear that Hitler was done, on June 6, 1944, American and British troops landed in Normandy. 150,000 soldiers. By that time, the Soviet Union had lost 20 million people in the fight against the fascists. This is all about proportions. German troops were already defeated near Stalingrad and at the Kursk Bulge, the Siege of Leningrad was lifted, Kiev and Sevastopol were liberated.

By the time the Allies landed in Normandy, the Red Army was already advancing in Bessarabia, heading towards Berlin after that. In this scenario, Roosevelt and Churchill understood that Stalin was doing fine without them on the continent and that the USSR was about to become the number one power in Europe and it would be Moscow that would decide the fate of the post-war world. They couldn't postpone it any longer. But they did. In order to weaken Germany, so that they would fight against an exhausted enemy, and Soviet Russia as well. There was no place for charity.

Moreover, it was the Soviet offensive on the Eastern Front that made the landing of the American troops in Normandy possible. If speaking about proportions — then Putin feels them precisely, or, to put in a different manner, according to the principles of evidence-based medicine. Here are the words of the Russian president at a meeting with the heads of world news agencies organized by TASS on June 6th, the anniversary of D-Day. Let me quote.

"As for the opening of the Second Front. I draw your attention to the fact that this is the second front. We had the first one. If you count the number of divisions, the manpower of the Wehrmacht, which fought against the Soviet troops on the Eastern Front, and the number of servicemen and vehicles that were engaged on the Western Front since 1944, it'll become clear immediately".

I think this is why Putin wasn't invited to Normandy. Since in the presence of the Russian leader, it would be too embarrassing to thank only America for the victory. However, the very fact of the invitation or non-invitation is not important for Putin. He cares about the essence, not about formalities.

So he said: "It doesn't matter. Something else matters — truth in the history of the terrible tragedy that befell humanity during the Second World War. We shall never forget it. We must pay due respect to the heroes of the resistance in Germany. We must pay due respect to the young people who died during the Normandy landings or escorted convoys to Murmansk from the UK. We should in no case allow anyone to distort history and make true heroes out of false ones".

Also, there were questions that could spoil the pompous ceremony of the Allies in Normandy, again, if Putin had been there. "How come there are people with a swastika walking around in some of the capitals of Eastern Europe, in Ukraine, in the Baltic States? Why is Nazism being glorified there? Only Jews in some Baltic countries went on demonstrations to protest the demolition of monuments to the heroes of the Great Patriotic War and World War II, wearing concentration camp prisoner coveralls. Everyone else holds their tongue based on today's tactical considerations. This is outrageous, it's just disgusting".

Then, there were the most important things. What all of this means for the modern world. About memory, sincerity, and real responsibility, so that a world war would never happen again. After all, we now have completely different weapons. A global conflict now will have a completely different result — an atomic one. Putin proposed to think about saving the planet. Putin is surprised by the fact that, on the one hand, humanity seems to care about small things, water, air, rare species of fish and animals, but on the other hand, when all of this can cease to exist at some point, all of it, it somehow became familiar, paled into insignificance. Then, he said how we came to this and what the role of the United States is.

Vladimir Putin: "Our American partners just withdrew from the Anti-Ballistic Missile Treaty. What now? I want to appeal to you, ladies and gentlemen. Did any of you actively protest, go outside with posters? No, you didn't. You kept silence. As if it was according to plan. But this was the first step to make the entire system of international relations in the field of global security unsteady. It was a serious step. Now, there's another issue — our American partners are going to unilaterally withdraw from the Intermediate-Range Nuclear Forces Treaty. In the first case, they did it fairly. They withdrew from it and that's it. But speaking about the latter, they obviously understood they would have to take responsibility, so they want to shift the blame onto Russia. It's all written in the articles. "It's forbidden to deploy any intermediate-range and shorter-range missile on land." It's written there. But they have already deployed them in Romania and are about to deploy them in Poland. This is a direct violation. Look at what a shorter-range and an intermediate-range missile are and then compare them with the parameters of unmanned aerial vehicles. They're basically the same".

Putin is surprised that everyone in the West seems to be blind and deaf. They pretend they don't understand what's going on. The same applies to the last treaty between Russia and the United States, the Strategic Arms Reduction Treaty, New START. According to it, each side should have no more than 1,550 intercontinental ballistic missiles. New START expires in February of 2021. The United States is refusing negotiations on the extension of the treaty.

Vladimir Putin: "Now, we have the extension of New START on the agenda. We don't have to extend it. Our newest systems can guarantee the security of Russia for a rather long period of time. Frankly speaking, we've outstripped our competitors in the sense of creation of hyper-weapon systems. If they don't want to extend the treaty, then we won't. We've said many times we are ready. They don't hold talks with us. There are no formal arrangements for the negotiation process. In 2021, it will be over. I draw your attention, there will be no tools at all that limit an arms race or, say, weapons in space. Do we understand what it means or not? It means that over our heads will be, say, nuclear weapons. All the time. Is anyone going to think about it, talk about it? Maybe show some concern? No. It's all silent".

Putin as a person of essence who doesn't care about pretentious ceremonies with tail-coats and gown with trains but the memory of the victims of World War II that can prevent World War III. He proposes a sober assessment of today's threats and a sober discussion at the negotiations of professionals and in public discussion. After all, people both in the East and in the West have the right to know what the situation is and what the diplomats of their countries really work on.