Putin Condemns Oligarchies in Ukraine and Moldova Who Are Usurping Power From the People! 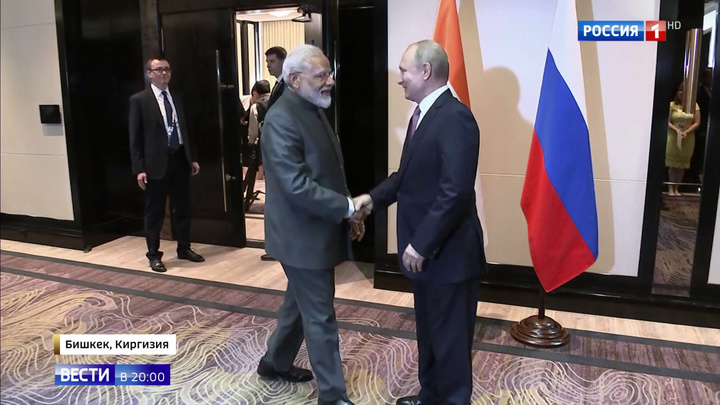 And now, Bishkek, where Vladimir Putin has arrived today to attend the Shanghai Cooperation Organization summit. The SCO leaders are going to discuss the expansion of trade relations. This matter concerns almost half the population of our planet. That's why the president spoke about the importance of cooperation between neighbors in his interview with the Mir agency. The head of the state spoke about Moscow's relationship with the new government of Ukraine and expressed the Kremlin's position on the political confrontation in Moldova.

Alexey Petrov with the details.

SCO symbols on the streets of Bishkek. The city center has flowers everywhere. At Monas International Airport, the guests of the summit are greeted with Eastern hospitality. There's a carpet running up to the Russian Il-96. Being a good host, the president of Kyrgyzstan first greeted the delegation, and then his colleague Vladimir Putin. Girls dressed in national attires offered them to taste the local pastry treats, called boorsok. Putin had a detailed conversation with the president of Kyrgyzstan right at the airport.

- I'm pleased to meet with you again. Russia and Mr. Putin are our best, most reliable friends.

Vladimir Putin: Not only in the participating countries, but also in the rest of the world there is a great deal of attention and interest in this event. In that sense, Bishkek has become a center of international activity to a certain extent. I'd like to wish you the best of luck.

- Thank you for your support in organizing this summit.

The main events will take place tomorrow. Today, the SCO leaders are holding bilateral meetings and numerous delegation consultations. The mood on the sidelines is optimistic. One of the reasons is that Russian-Indian relations are developing dynamically.

Putin invited the Indian Prime Minister to Vladivostok to be the guest of honor at the Eastern Economic Forum. He also congratulated him on his party's victory, his re-election, and one other thing.

Vladimir Putin: "You have been decorated with the highest state award of Russia, the Order of St. Andrew the Apostle. I would like to congratulate you on this as well and express my hope that after your re-election, our work on promoting bilateral contacts and relations for the benefit of the peoples of India and Russia will continue".

Narendra Modi, Prime Minister of India: "This is a great honor for me. I know that it is the highest Russian state award. I hope that we will soon meet again in Japan. I believe that we should also hold talks in the Russia-India-China format there".

Russia has a lot of joint projects with India, including the Kudankulam Nuclear Power Plant.

Alexey Likhachev, CEO of Rosatom: "The first two power units are fully operational. We're discussing the further development of our cooperation. As you may know, we're expecting specific offers for a new platform".

Putin spoke a lot about the development of the SCO-format cooperation in his interview with Mir. He stressed the necessity to develop links with China, against the background of the blatant degradation of Russian-American relations. Russia hopes that common sense will prevail. This applies to Ukraine as well.

Vladimir Putin: “I believe there is no way around restoring our relations, it's inevitable. Things can't be the way they are now between two parts of the same nation, between two brotherly nations. This does not depend on our relations with the political elites of the past, for example, the people who put their personal success and gain, or used to put at least, at the forefront of everything they did and their whole lives, along with the preservation of the capital they amassed at the expense of the Ukrainian people and kept somewhere abroad. This is where their love for the West comes from, I suppose. But I hope that the new leadership has no such limitations, and feels free to rely on the trust the Ukrainians have placed in the newly elected president, so it will be able to operate proactively towards restoring relations between Ukraine and Russia. It won't hide behind Russophobic fabrications and ideas in order to evade internal Ukrainian problems, in the economy and social sphere above all.”

Vladimir Putin: “The authorities in Moldova, as well as partly in Ukraine, were in the full and literal sense of the word usurped by oligarchic groups, by oligarchs, who brought all government agencies to heel, all of them: law enforcement, the parliament, you name it. They made their fortunes at the expense of the Moldovan people and used them to improve their personal welfare and to put pressure on the state. All that President Dodon and his recent opponents, one could call them pro-Western parties, have done, after all, was actually a step towards building a full-fledged, civilized, modern state. We will certainly support both President Dodon and his current coalition partners so that they eventually get rid of the people, to put it politely, who have usurped power in Moldova, and, despite some possible internal controversy, still find it in themselves to build joint work in the interests of the Moldovan state and the Moldovan people.”

The official program wasn't the only thing waiting for the leaders in Bishkek. There was a gala concert in honor of the guests of the summit. The honored guests took their seats. The leaders saw the classical performance, a ballet, and a true culture festival of several different nations.

Alexander Lukashenko (Belarus has observer status in the SCO) appeared to be brooding. The president of China visibly enjoyed the musical performance.

They all have a busy schedule tomorrow. The leaders will discuss key global issues. In times when the very architecture of international relations is being challenged, a format like SCO becomes especially valuable. It becomes the factor in the preservation of balance in world politics. The coordination of joint efforts is one of the key topics at the summit.